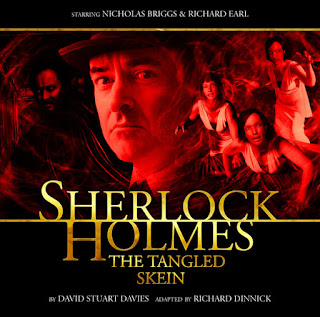 Big Finish's next audio drama takes the characters out of the realm of mystery and headlong into a world of suspense and horror as Sherlock Holmes comes face-to-face with the king of vampires, Count Dracula.

Picking up where "The Hound of the Baskervilles" left off, Sherlock Holmes learns that the villainous Jack Stapleton is in fact still alive and out for revenge against the detective. When a number of mysterious attacks occur, the victims drained of blood and with two small pin-pricks on their throats, Holmes ends up associating himself with Professor Van Helsing. Van Helsing tells Holmes that the source of these attacks is Count Dracula, and soon Holmes and Watson are speeding off towards Dartmoor once again in search of the king of the un-dead.

"The Tangled Skein" was originally published by David Stuart Davies in 1995. Richard Dinnick, adapter of Big Finish's "The Hound of the Baskervilles" was on hand once more to adapt this pastiche and makes this drama very exciting to listen to. I gave nothing but praise to Dinnick's adaptation of "Hound" but he surpasses himself with this adventure. All of the elements work splendidly together making for a genuinely scary and very exciting audio drama.

"The Tangled Skein" may not be everyone's cup of tea though. While the concept of Sherlock Holmes facing Dracula is not new, it does make one have to be open to the supernatural occurrences which take place in this book. For the most part, the first installment is more mystery driven as Holmes and Watson piece together the clues which lead them to Professor Van Helsing, but the second part is much more akin to a thriller as the great detective pursues the vampires across Dartmoor. Seeing Sherlock Holmes break his ethical code ("The world is big enough...no ghosts need apply") may be a bit jarring for some.

Interestingly, "The Tangled Skein" does not follow the plot of Bram Stoker's novel. David Stuart Davies says that he was inspired by the Hammer Horror films made from the late '50's until the mid '70's with Christopher Lee playing the role of Dracula and Peter Cushing as Van Helsing. His novel certainly mirrors the blood-and-thunder, Gothic style of the Hammer Horror films expertly.

As usual, Nicholas Briggs and Richard Earl are excellent. Guest star Barnaby Edwards is fantastic as well returning as Jack Stapleton. The sound effects and music are wonderful as usual and really add to the horror-like atmosphere of the story. However, you should be warned - "The Tangled Skein" is an extremely violent story (especially in its final half). The sound effects certainly add to this gruesomeness, and there are times when shivers are liable to crawl up your spine. But...that means their doing it right - doesn't it?

Posted by Nick Cardillo at 7:10 AM