The Adventure of the Perfidious Plot Device 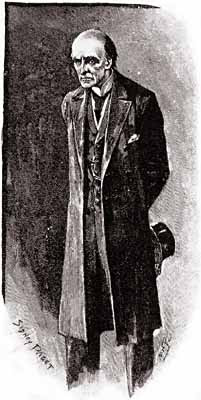 As much as I hate to rain on our Sherlockians of the Internet parade, there is one thing which we must admit, if we have not already. The character of Professor James Moriarty is a plot device. A good one mind you and one has developed his own life, but he only started out as a plot device with the purpose of killing Sherlock Holmes.

If you're familiar with the story, feel free to skip this paragraph. In 1893 after having written two novels and two complete series of short stories featuring Sherlock Holmes and Dr. Watson, Arthur Conan Doyle had had enough. He wanted to focus on different forms of writing and he felt that Holmes had eclipsed him. So in a bold move, Doyle wrote "The Final Problem" which introduced readers to Professor James Moriarty, the Napoleon of Crime and the organizer of half that is evil and nearly all that is undetected in the city of London. After escaping the city to Switzerland, Moriarty pursues Holmes to the summit of the Reichenbach Falls where the two topple to their death.

That's how it would have been if Doyle had gotten his way. With his detective as dead as a doornail, Doyle moved onto different work, only resurrecting Holmes seven years later in "The Hound of Baskervilles" since the plot lacked a central character to tie it all together. In 1903 Holmes made his reappearance in "The Empty House" and his literary character has since prospered. Nevertheless, we must still face the inevitable. Professor Moriarty was only intended to appear in one story and then die. He would be Holmes' ultimate foe and the great detective would die in an act of heroics.

What I found so interesting about this is how Moriarty has taken on a life of his own. It is a rare occasion to find a Sherlock Holmes pastiche in which the character of Moriarty is not mentioned or written about. He has gone on to become just as famous as Holmes and Watson, becoming invariably tied to the great detective. What's more, Moriarty was the first "criminal mastermind." His presence in the canon paved the way for dozens of villains to come. In my mind, most of the James Bond villains owe something to the old mathematics professor.

Even though he has been expanded upon greatly since his inception, Professor Moriarty has remained more or the less the same. He's still the evil mastermind plotting the downfall of Sherlock Holmes and carrying out some evil schemes all the while. The most radical change in character for Moriarty has come in the BBC series, "Sherlock" and it's not a bad one. Moriarty becomes the embodiment of Holmes' evil side. Sherlock and Jim Moriarty (played brilliantly by Andrew Scott) are essentially two sides of the same coin. And even then, there'll not all that different. "I may be on the side of the angels," Sherlock says, "But don;t think for one second that I am one of them." Surely it's one of the most brilliant lines in the show and really adds new depth to the Moriarty relationship.

In addition to "Sherlock," Moriarty has been captured on screen a number of times. Basil Rathbone and Nigel Bruce faced three different Moriarty's in their series of 14 films. Moriarty was played by George Zucco, Lionel Atwill and Henry Daniell in "The Adventures of Sherlock Holmes" (1939), "The Secret Weapon" (1943) and "The Woman in Green" (1945) respectively. The professor has also been played by Eric Porter, Malcolm McDowell, Richard Roxburgh, Vincent Price (well sort of), Anthony Andrews, Jared Harris and Sir Laurence Oliver. And that's only the tip of the ice-berg. Moriarty has appeared in so many different forms - from the king in a game of Sherlock Holmes chess to having his own novel by Kim Newman (which I really ought to get around to reading).

I just find it incredible what has occurred to the character of Professor James Moriarty. What originated as a one-off plot device has became something far greater. Professor Moriarty is tied to Sherlock Holmes just as much as the pipe, the deerstalker hat and Dr. Watson are. He has become one of the most popular figures in Sherlockian culture and I think that he'll continue to be for a very long time.
Posted by Nick Cardillo at 3:53 AM