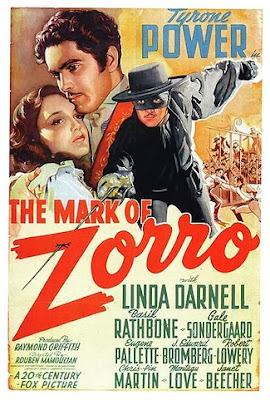 After my last review concerning 1935's "Captain Blood," which was filled with enthusiasm and euphoria, you must be wondering how an adventure, swashbuckling-type of movie could top that. Well, 1940's "The Mark of Zorro" appears to have done so, as it is one of my very favourite films and my pick for the 2nd best Basil Rathbone movie.

Don Diego Vega (Tyrone Power) returns to his native California from an extended trip in Spain to find his homeland very different. The people are being oppressed by a powerful and corrupt ruler, Luis Qunitero (J. Edward Bromberg) and his deadly right-hand man, Captain Esteban Pasquale (Basil Rathbone). To fight back against the injustice, Vega masquerades as Zorro, the town's vigilante who will stop at nothing to protect the people.

"The Mark of Zorro" was produced at 20th Century Fox, who during the 1940's, wasn't well-known for action, adventure dramas. The studio specialized in mystery movies and some of the finest '40's Film Noir emerged from the studio. It is perhaps for that reason that "The Mark of Zorro" feels as though it were filmed on a smaller, less expensive scale, than other swashbucklers of the time. The fact that "Zorro" has less of a grandiose air is not a bad thing though. If anything, it adds realism to the more or less secluded Southern Californian setting. It also provides a nice contrast between the poor citizens of the community and the wealthy, corrupt government who oversee them.

Starring in the duel role of Diego Vega and Zorro is Tyrone Power, who in the early '40's, was still making a name for himself. The previous year, Power had played the title role in Fox's 1939 biopic, "Jesse James," which garnered the actor some stardom, but it was his contribution to "The Mark of Zorro" which solidified Power as a romantic, leading man. Linda Darnell makes for a fine love interest - her acting is fine, but her character as Lolita Quintero, the corrupt governor's daughter, is somewhat bland. On a side-note, Darnell is perhaps best remembered today as a sleazy lounge singer who is murdered in the 1945 thriller, "Hangover Square."

On the opposite end of the spectrum is Rathbone, who is absolutely fantastic as Captain Esteban Pasquale. It is interesting to note that Pasquale is more-or-less a stooge to the main villain, but Rathbone manages to steal the show. From the moment he appears on screen, it's obvious that Pasquale is up to no good. Practicing his swordsmanship, he produly tells Diego: "Some men toy with their canes, monocles or snuff boxes. I toy with a sword." Throughout the film, Rathbone's performance is grand, enthusing the part with subtle hints of black comedy. And when Rathbone is playing a sword-toting villain in a swashbuckler, there is of course going to be a duel. The sword duel in this film is brilliant, excellently executed. It is, unlike other fine sword duels committed to celluloid, confined to a small space, but this manages to heighten the suspense and adds an element of claustrophobia.

Overall, "The Mark of Zorro" is a very enjoyable, though a slightly atypical swashbuckler. Much like all of the films in this countdown, I highly recommend it.

Coming Next Time: Well...I think I'm going to keep my number one pick a secret
Posted by Nick Cardillo at 3:46 AM