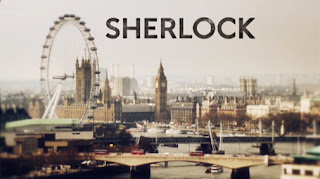 Warning: This review could potentially spoil the episode, so make sure you have seen The Sign of Three before you continue

Even now, fans are still unsure about their feelings towards the Series 3 opener, The Empty Hearse. I honestly cannot say what those who disliked that episode thought of the second, The Sign of Three, a collaborative effort penned by Steve Thompson, Steven Moffat and Mark Gatiss. I will be blunt up front - this review is far more difficult to write as The Sign of Three is surely an unconventional episode.

Despite the fact that the title card for this episode says its the brainchild of the series' three writings, I'm sure I feel the hand of Steve Thompson behind this one the most. Thompson is an 'interesting' writer. He is terribly inconsistent when it comes to the quality of his work. He was responsible for the The Blind Banker, the episode often viewed as Sherlock's low-point as well as Journey to the Centre of the TARDIS, a pretty average episode from the seventh series of Doctor Who. Yet, Thompson has also turned out likable scripts such as The Reichenbach Fall and The Curse of the Black Spot for Sherlock and Doctor Who respectively. Yet, was his latest effort a hit or a miss?

Sherlock (Benedict Cumberbatch) is facing perhaps the most daunting task he has ever encountered - delivering his best man speech at John's (Martin Freeman) wedding. Little does the detective know, his skills of analysis and deduction will be put to the test as a murderer masquerades at the ceremony. Will Sherlock be able to save the happy couple from one of the most ingenious killers he's ever faced?

The Sign of Three was really a mixed episode. It achieved fantastical highs, but at the same time reached abysmal lows. I'll look at both sides, beginning with the positives. This episode was very unconventional as it pushed the real 'mystery' towards the end of the episode, and much of the plot was focused around Sherlock's best man speech. He relays to the onlookers (and us) two unsolved mysteries which turn out to have great bearing upon the solution. These plot strands were excellent, and I must say that the first adventure showcased, an ingenious locked-room mystery, was one of the show's finest hours. The second case was equally interesting, but rather lacked in terms of genuine jaw-dropping surprises.

Great visuals have always been something which Sherlock has been about, and this episode scored brilliantly on that front, especially in the scenes where Sherlock has a conversation in his head. The execution of the final set of deductions at the wedding ceremony were well done too, and really managed to heighten the suspense. If only the entire episode could have been this way.

Let me make it clear - I'm fine with a little experimentation every once and a while, and The Sign of Three was surely experimental in terms of its storytelling. Yet, the mid-section of this episode was at times almost embarrassing to watch, and I think really overstepped the boundaries of 'experimentation.' Set during John's stag night, he and Sherlock get incredibly drunk before they're asked to tackle a very interesting case. While these scenes did at times make me smile due to the sheer ludicrousness of the whole thing, it really presented the great detectives(s) in a less than flattering light, especially as events reached a climax with Sherlock becoming sick on the crime scene.

As I've stated numerous times, The Sign of Three is an unconventional story, and I suppose there is noting wrong with that. The mystery elements worked really well and I think its has acted as a nice foreward to next week's finale, His Last Vow, but the comedic elements fell rather flat (at least for me). I wouldn't say it is the series' weakest episode, but not the shining hour either. I give The Sign of Three 3 out of 5 stars.
Posted by Nick Cardillo at 3:45 AM