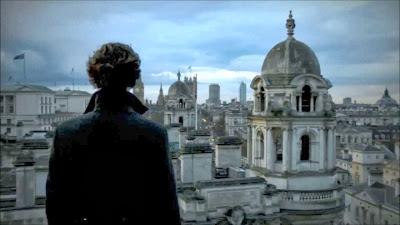 At long last, Sherlock aired on both sides of the Atlantic. No longer do I need to begin post headings with SPOILERS! I can discuss the show at length and make witty references in forthcoming posts (there's no guarantee that'll happen though). So, now the reflection can begin. Looking back on Series 3 of Sherlock, how well did it fit alongside its preceding seasons? That's the question I hope to answer during today's analysis.

All three seasons of Sherlock have featured episodes which I describe as 'good,' 'better,' and 'best.' For example, Series 1's The Blind Banker was 'good.' The Great Game was 'better' and A Study in Pink was 'best.' Judging the episodes in this way, one not only sees that all three episodes of each series have been of incredibly high quality, but when it comes to judging the 'best' episodes alongside each other its very difficult.

Occasionally, on the IMDb forums, contributors will rank the episodes in order of best to worst. I thought I'd take a minute and follow suit here. Note: I love all nine episodes of Sherlock, therefore the following list is based upon my opinions of favourite to least favourite as finding the 'worst' episode of Sherlock would be a task worthy of the great detective himself. So here goes:

A Scandal in Belgravia - This is I think the most entertaining of Sherlock, packed to the brim with Sherlockian goodness. It manages to create poignant character moments without jeopardizing the case at hand, and the episode elicits laughs without making Sherlock and John a laughing stock.

His Last Vow - After the first two episodes of Series 3 which really delved into character, His Last Vow returned to the formula which fans had come to love - mystery first! While the episode features a great deal of character building, His Last Vow takes a purely no-nonsense approach, easily making it the most serious and darkest episode thus far.

The Great Game - The Series 1 finale gave the viewer a number of mysteries for the price of one. The episode is also the most suspenseful of the lot, pitting Sherlock and John against an all too real ticking time bomb. Very nicely structured story and a nice introduction to the most grandiose Moriarty who has have graved the screen. 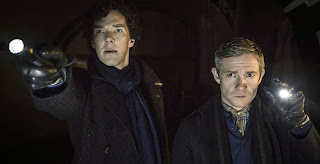 The Empty Hearse - By far, The Empty Hearse was the most entertaining episode of Sherlock. In an unusual move, the mystery elements took a back seat to the building up of character. Sherlock and John had some of their best moments in this episode and there was an abundance of laughs.

The Sign of Three - As with its predecessor, The Empty Hearse, this episode took a closer look at the characters who live in this Sherlockian world. The episode reached its highest points when it focused on the mystery elements of the episode, but there were times when I felt as though the comedy reared its head a bit too much.

The Hounds of Baskerville - This episode scored best on atmosphere, creating one of the most unnerving settings in any adaptation of the novel. Yet, Benedict Cumberbatch's performance is perhaps at odds with his other interpretations of the character and the revelation of the ending is too far-fetched to be believed.

The Blind Banker - An interesting allusion to Doyle in its bombast, but a rather unbelievable story which feels rather flat coming off of the success which was A Study in Pink. There are a few nice references to The Dancing Men and The Valley of Fear though.

The Reichenbach Fall - I know what you must be thinking - why is this my least favourite. While everything about it is 'good,' I just felt as though it distanced itself from Doyle too much, and didn't feature any traces of mystery, but played out like a standard thriller.

So there we have it, a complete retrospective on Sherlock Series 1-3. Now that yet another season has come to an end, we are yet again doomed to play the waiting game, speculating on what's to come next. Yet, the waiting heightens the suspense, and is in some ways rather entertaining. The game is on...
Posted by Nick Cardillo at 5:36 AM