If I were to ever be accused of the crime of hyperbole, perhaps now is the time. With a title like 'The Top 10 Greatest Sherlock Holmes Films (Of All Time),' how couldn't you think that I have maybe overstepped my boundaries a bit? Well, maybe I have. Yet, the time has come for me to finally list my favourite Sherlock Holmes films. Some (and most) of these movies have already been covered on this blog, but never I think with the amount of gushing enthusiasm which is to follow. So, sit back and relax as I explore the first five films on this list. Note: To qualify, the film had to be a major motion picture release. So, as much as I would have loved to include an episode of Sherlock or The Adventures of Sherlock Holmes (1984), I sadly could not. Well then, let's begin! 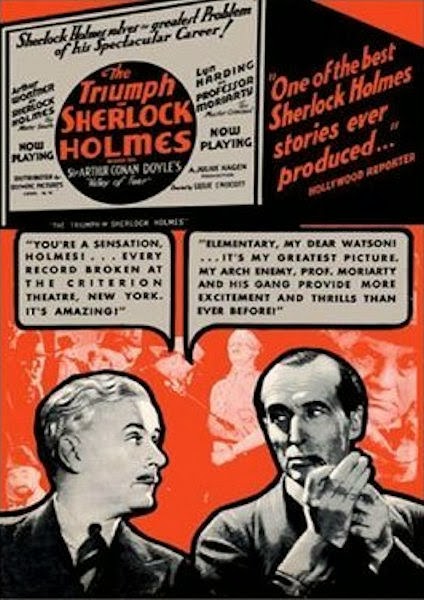 Notable in the history of Sherlockian cinema as being a rare adaptation of Doyle's novel, The Valley of Fear, the film tackles the difficulties of transferring the novel to screen head on. The flashback scene which encompasses the second half of the book is adapted in full, and surprisingly the small English studio of Twickenham doubled rather well for a small mining town in Pennsylvania. Wontner is in top form here, despite being sixty at the time of filming. Wontner lends an air of dry, sardonic humour to the role, and has excellent chemistry with his Watson, Australian actor Ian Fleming (no relation to the James Bond creator of the same name). The Triumph of Sherlock Holmes' greatest accomplishment is the inclusion of Professor Moriarty, played by Lyn Harding. The bombastic actor gives a brilliant turn as the Napoleon of Crime, who actually plays an important role in the film, and becomes involved in the plot's action, which is at odds with Doyle's original where the Professor played a fairly minor role. 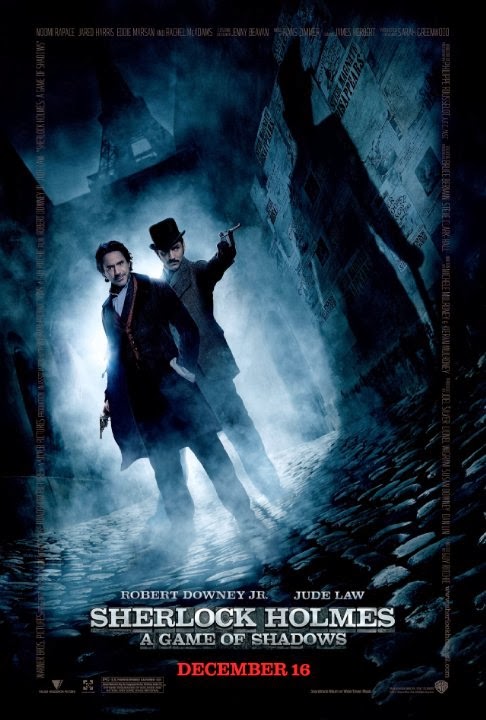 #9 - Sherlock Holmes 2: A Game of Shadows (2011) - The second in the highly successful Guy Ritchie-directed franchise, Game of Shadows has divided fans since its release in 2011. With an abundance of action scenes and slow-mo, it is a pretty dizzying spectacle and rather far removed from the canon with gun running and explosions. Yet, Game of Shadows features brilliant performances from its leads. Robert Downey Jr. turns in an excellent performance as the detective, who is a bit more grounded this time 'round, while Jude Law continues to prove his worth as Watson, and elevating the part from the straight-man side-kick which it could be.

Also of note is Jared Harris, perhaps the finest Moriarty the screen has ever seen, enthusing the part of a steely determination and utter insanity, making this Napoleon of Crime feel like a true villain. Who could forget Moriarty's lyrical singing and dancing as he strings Holmes up by a large fish hook in the film's nastiest scene? While the plot doesn't leave much breathing room, there are some excellent set-pieces, especially the gun fight aboard the train, and the chase through the woods. Though it is perhaps not as apparent as in 2009's Sherlock Holmes, Holmes does do a bit of detective work, and it all comes flowing forth in a final bit of slight-of-hand during the climax's brilliantly tense chess match. 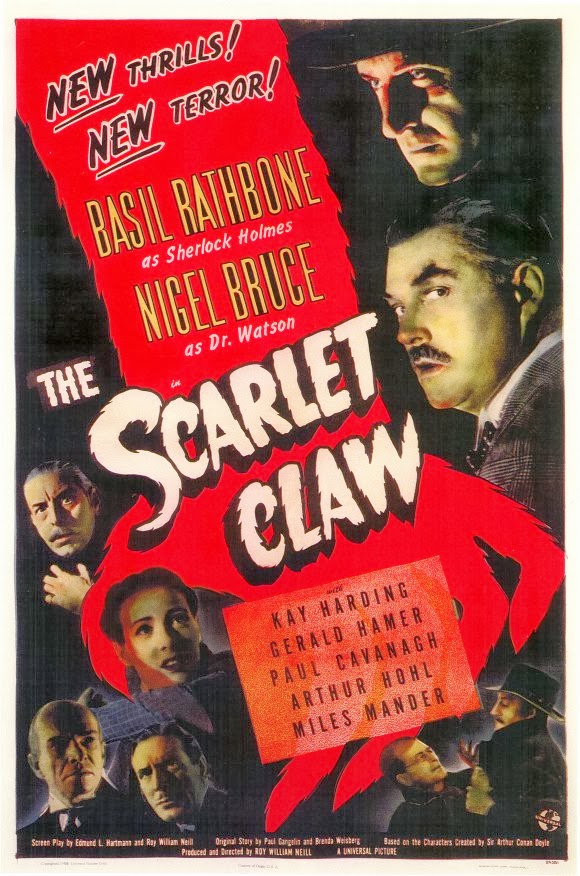 #8 - The Scarlet Claw (1944) - Universal Studios' Sherlock Holmes took a head-first plunge into the world of horror films for this fine installment in their lengthy series. While most find this entry the finest of all Basil Rathbone's 14 Holmes films, I do think others are better (you shall see), but I cannot deny its remarkable staying power and complex plot. For the first time of screen, Sherlock Holmes matches wits with a truly psychopathic killer, and the backdrop of fog-shrouded Canadian moorlands is one-hundred percent atmosphere. The killer's ploy of using multiple disguises means you never know who can and cannot be trusted from amongst the suspects, and come the finale, I dare anyone to say "oh, well I knew it was so and so from the start"!

Basil Rathbone lends one of his finest performances to this film, as does Nigel Bruce, who does a bit less bumbling than usual. They are backed up by Paul Cavanagh, Miles Mander and Arthur Hohl as well as Kay Harding, who plays a victim in one of the series' most gut-wrenching moments. To anyone who has not seen this film, be on the lookout for a particularly impressive scene in which one character bites the dust (I won't give too much away). It's a truly goose-bump raising, and surprisingly violent bit of movie-making, and shares more than one similarity to Alfred Hitchcock's Psycho, a film which The Scarlet Claw predates by sixteen years. 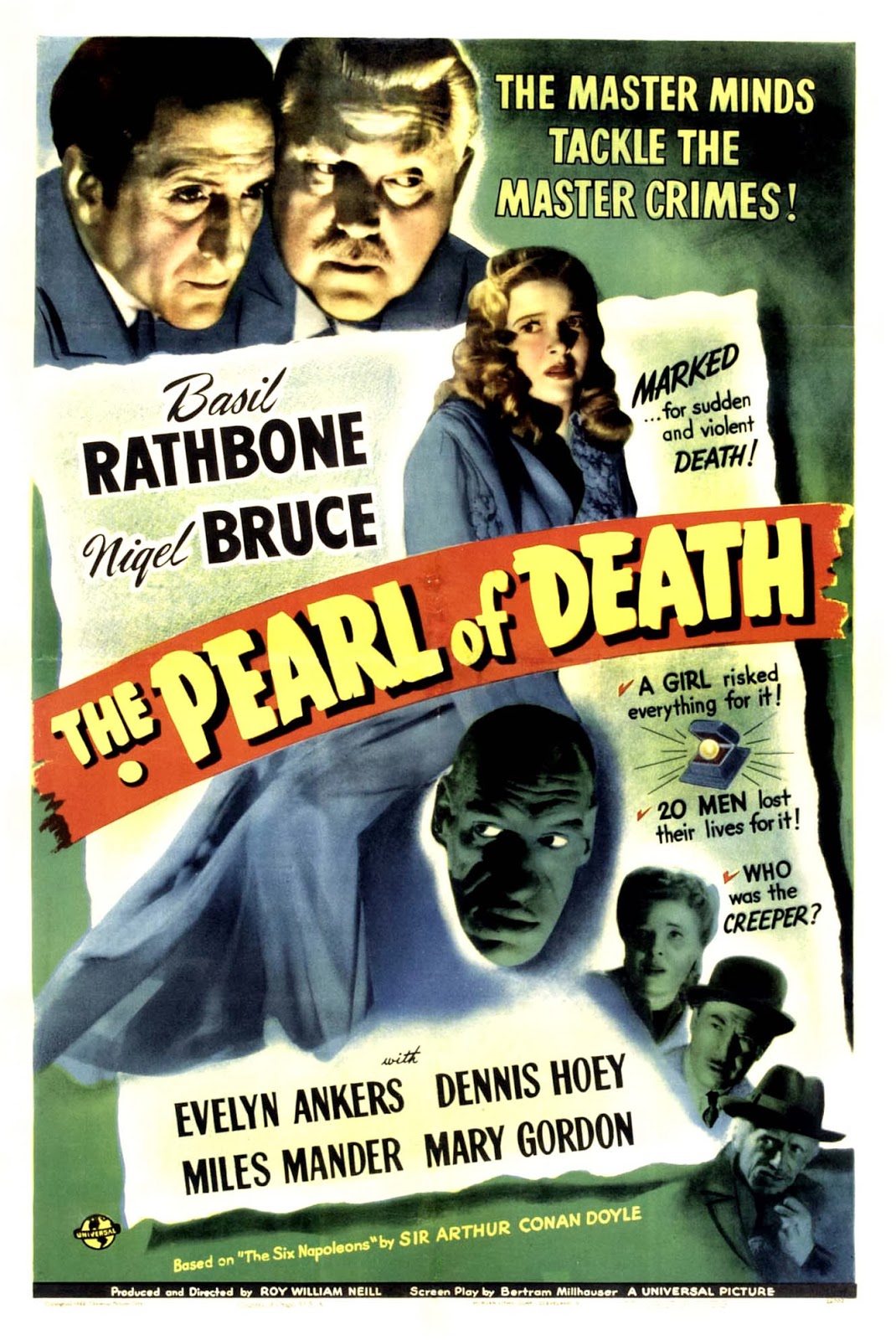 #7 - The Pearl of Death (1944) - Coming directly on the heels of The Scarlet Claw, Universal's The Pearl of Death sees Doyle's story, The Six Napoleons completely re-imagined. While not much of a mystery per se, The Pearl of Death is a taught thriller with Holmes and Watson racing to recover the stolen Borgia Pearl. To attract the horror film-loving crowd, Universal threw in The Creeper, a hulking brute of a murderer who snaps his victim's spines.

While The Scarlet Claw kept its mischief relegated to the Canadian boondocks, The Pearl of Death is set entirely in London, which, to some extent, makes the film have an even more unnerving atmosphere as all the Gothic action transpires right in a metropolitan setting. While the film's plot is pretty dark stuff, it retains a light air with Basil Rathbone's Holmes donning a disguise here and there, and Evelyn Ankers (one of 1940's horror finest actresses) portraying a number of parts. Miles Mander is back as the villain, simply oozing slime in the role, and Rondo Hatton makes his screen debut as the aforementioned Creeper. The Pearl of Death is one of the best of Universal's Holmes films, because, for the first time, it feels like the recurring cast is one big happy family. Rathbone, Bruce, Mary Gordon and Dennis Hoey all have such wonderful screen chemistry that you cannot help but smile. 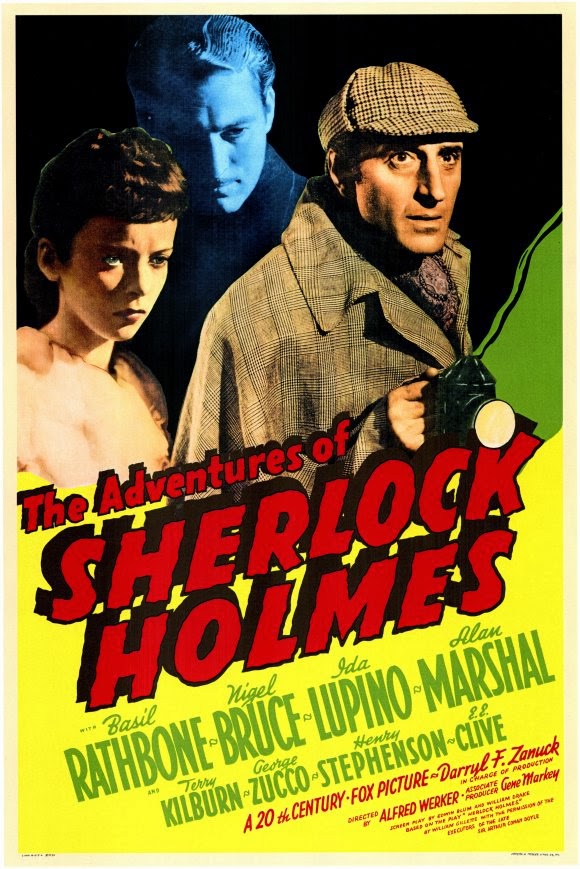 #6 - The Adventures of Sherlock Holmes (1939) - Rounding out Part I is the second Sherlock Holmes film in which Basil Rathbone played the great detective, and one of the finest Sherlockian turns of the 1930's. Coming off of The Hound of the Baskervilles, Rathbone's second outing shows just how quickly he slipped into the role, and its remarkable to see how much more comfortable he was playing the great detective. Though the plot leaves some plot holes, The Adventures of Sherlock Holmes from start to finish is a wild, entertaining ride.

Complimenting Rathbone is Nigel Bruce, who is less bumbling and genuinely funny. There are some comedic gold sequences herein. There's also Ida Lupino turning in an excellent early performance, and no discussion of this movie would be complete without mention of George Zucco's Professor Moriarty. The Professor's scheme to pull off the crime of the century right under the detective's nose drives the plot forward. All of this is wrapped up in the great Christmas paper that is the Victorian setting, and tied with a neat little bow. The true highlight of this fun film is Basil Rathbone's performance of "I Do Like to be Beside the Seaside" while performing under the guise of a music hall performer. The Adventures of Sherlock Holmes is not one to be missed.

Well, Part I has come to an end. What do you think of these picks so far? Do they constitute as the greatest Sherlock Holmes films ever made? Fell free to comment below! Stop back next week for Part II in which I count down the top 5...
Posted by Nick Cardillo at 3:48 AM