Well, let's not waste anymore time. I'd like to think for the past week you've all been mulling over what my top five picks would be. If that's not the case, so be it. But, anyway, let us continue. 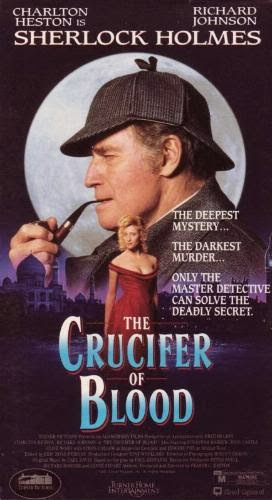 #5 - The Crucifer of Blood (1991) - This at times flawed, but harmless Sherlockian effort was born from the mind of Paul Giovanni's successful play of the same name. I admit to having a soft spot for this adaptation, as I find it an enjoyable film, though not perfect. The main reason to watch is the plot, which is a streamlined version of The Sign of Four. The new plot heightens suspense and manages to condense a lot of the novel's exposition. What's more, the climax plunges into the realm of film-noir, something lacking in most Sherlock Holmes films.

Charlton Heston, whose filmography is as long as one's arm, if not longer, takes a reasonable stab at the role of Sherlock Holmes, and pulls off the role well. What's more, Heston seems to be having a grand old time playing the great detective, and honestly who could blame him? Richard Johnson's Watson is more level-headed and serious than the norm, but too old to be romancing Miss Irene St. Clair (played by Susannah Harker), and their scenes together are positively cringe-worthy. A solid cast of familiar English character actors also put in appearances. Edward Fox's Major Ross is the epitome of stubbornness and antagonism and Simon Callow's Inspector Lestrade is a fun, though dim-witted police representative. The Crucifer of Blood is a fun, theatrical yarn and comes recommended from me, though I daresay this made-for-television film may not be everyone's cup of tea. 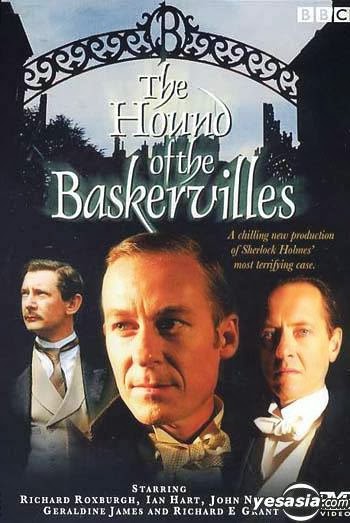 #4 - The Hound of the Baskervilles (2002) - I know what is going through your mind: How could this be on a Top 10 List? Or, How can this be so close to number one? I'll tell you how: it's because it is my Sherlockian guilty pleasure. By no stretch of the imagination a perfect adaptation, this version of Hound boldly tried to do something different, taking the well-loved novel and putting a more contemporary spin on things. A true sign of the times, this adaptation features a rough-around-the-edges detective, as played by Richard Roxburgh, who takes the law into his own hands on more than one occasion. Paired with Ian Hart, one of the better Watson's of recent times, the two are an unusual, and rather dark version of Doyle's intrepid heroes.

The Hound of the Baskervilles isn't shy when it comes to atmosphere either, with a moody score and evocative location filming on the Isle of Mann. There's also a bit of fun to be had from Richard E. Grant's Stapleton as well as a truly creepy seance held by Dr. and Mrs. Mortimer at which the hound makes a truly startling appearance. Speaking of the hound, the computer-generated demon dog, though pretty unconvincing, seems to be a force to be reckoned with. All in all, The Hound of the Baskervilles is an oft-critised adaptation, and though not perfect in every respect, makes for entertaining viewing when one is open to a change of pace. 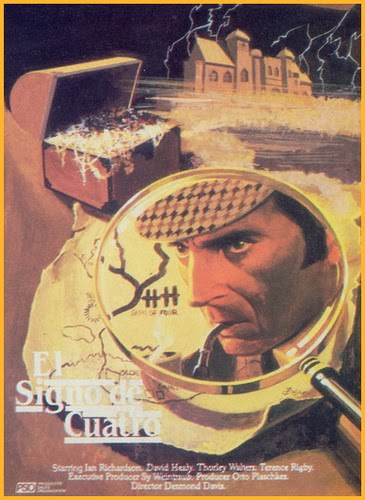 #3 - The Sign of Four (1983) - Ian Richardson, star of 1983's The Sign of Four is a sadly overlooked name when it comes to Sherlock Holmes. He shines his brightest in this version of Doyle's novel, which brilliantly takes Doyle's novel and enthuses it with elements of true Gothic horror. This tinge of the horrific is what makes me rate this particular adaptation so highly. Included herein: a brawl between Holmes and Tonga, the deadly pygmy, a chase aboard a fairground merry-go-round and through a hall of mirrors and a rip-roaring boat chase down the Thames.

Aside from the excellent Ian Richardson are some equally fine performances. David Healy makes for a good foil as Watson, Joe Melia is a creepy, one-legged Jonathon Small, Clive Merrison, BBC Radio's Sherlock Holmes, is a thoroughly malicious Bartholomew Shalto and Thorley Walters is at his manic best as John Shalto. Yet, none of them can match Richardson, surely one of the best actors to take on the role of the great detective. Taking the part to heart, Richardson's performance is distinctly Doylean in style, prefiguring both Jeremy Brett and Benedict Cumberbatch, and it is easy to picture Richardson when one reads the canon. Though he returned to the role for a second time in The Hound of the Baskervilles (1983), The Sign of Four is a more entertaining and thoroughly remarkable Doylean adaptation. 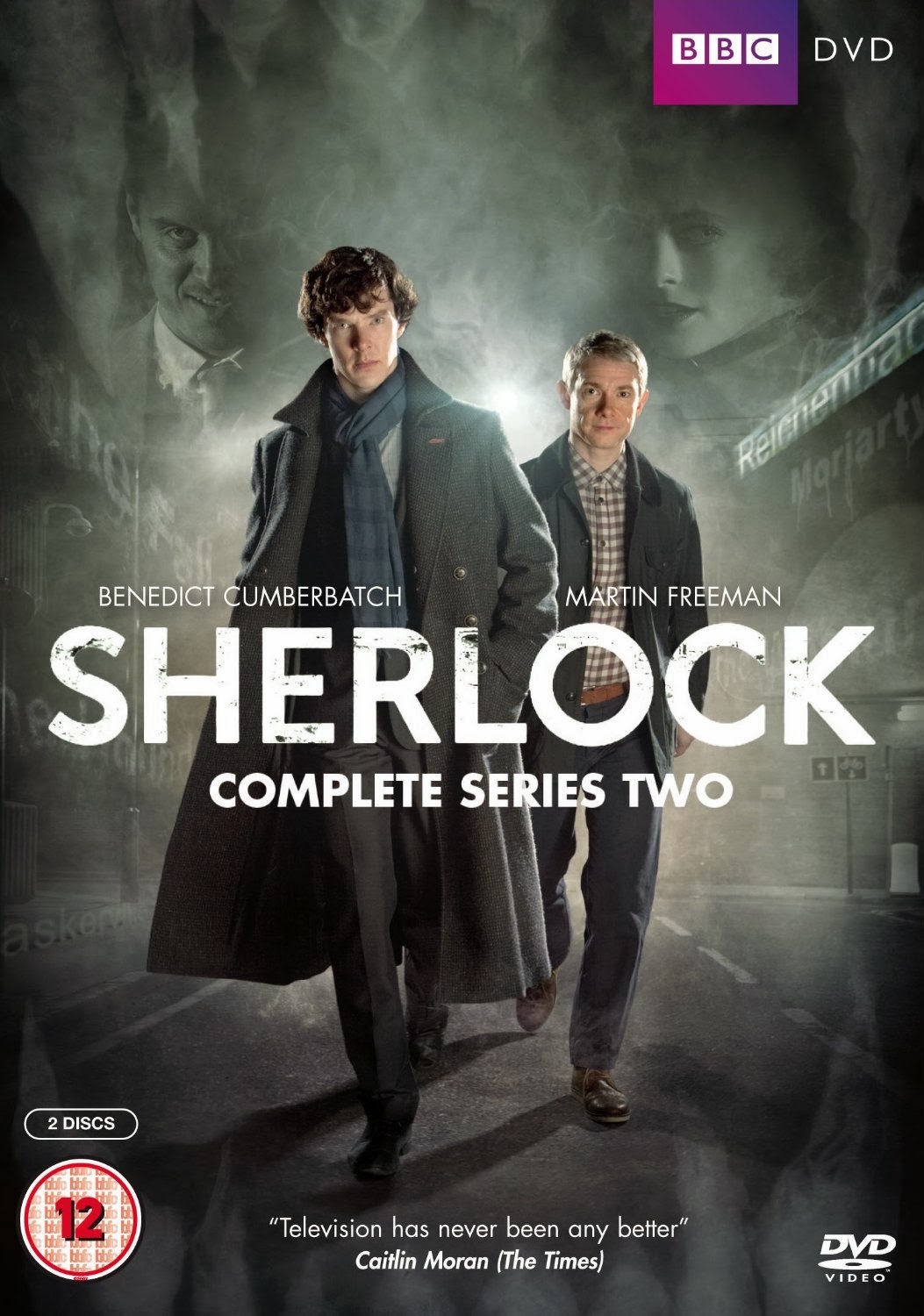 #2 - Sherlock: A Scandal in Belgravia (2012) - There was no doubt that Sherlock was going to be represented on this list, it was just a matter of which episode and where will it fall? Of all the episodes (and there's only nine to pick from), the one I had to showcase was the brilliant A Scandal in Belgravia, arguably the finest 90-minutes committed to television screens in the last decade. Right from frame one and its resolution to the Series 1 cliffhanger to the end of the credits, A Scandal in Belgravia is a roller coaster ride of suspense, thrills, laughs and tears.

The episode brilliantly balances character pieces and writer Steven Moffat expertly peels back the outer layers of the great detective's being looking at Sherlock Holmes, the man. Benedict Cumberbatch handles himself brilliantly in the episode as does Laura Pulver as Irene Adler. Though somewhat side-lined, Martin Freeman's John Watson is always likable and Mark Gatiss' Mycroft is at his manipulative best. Complimenting the fine performances are the wonderful references to the canon which is willing to bring a smile to any Sherlockian's face. A Scandal in Belgravia is a beautifully executed episode, and surely the crowning achievement in this brilliant television run. So, how could anything top it? 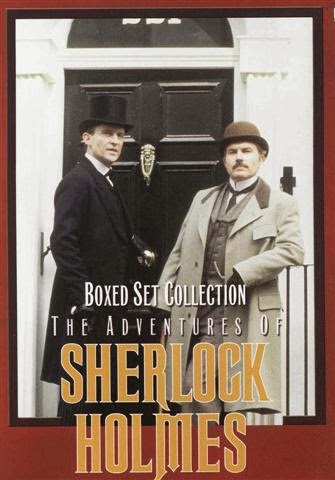 To work with Brett is the finest Dr. Watson the screen has ever seen in the form of David Burke. The two share such fine screen chemistry, which makes their performances so much more genuine and come the season finale in The Final Problem, all the more moving. While the quality of Granada Television's Sherlock Holmes series' were consistently high, their debut season, The Adventures of Sherlock Holmes is the high water mark. Surely if a Sherlockian has not seen this series, they are missing something brilliant, and it must be seen as it provides some of the finest adaptations of the Conan Doyle canon ever made.

Well, that's all for yet another Top 10 list. What did you think this 'round? A bit more controversial than my Top 10 Movie list? Any TV shows or television movies I left out? Feel free to comment below!
Posted by Nick Cardillo at 3:44 AM