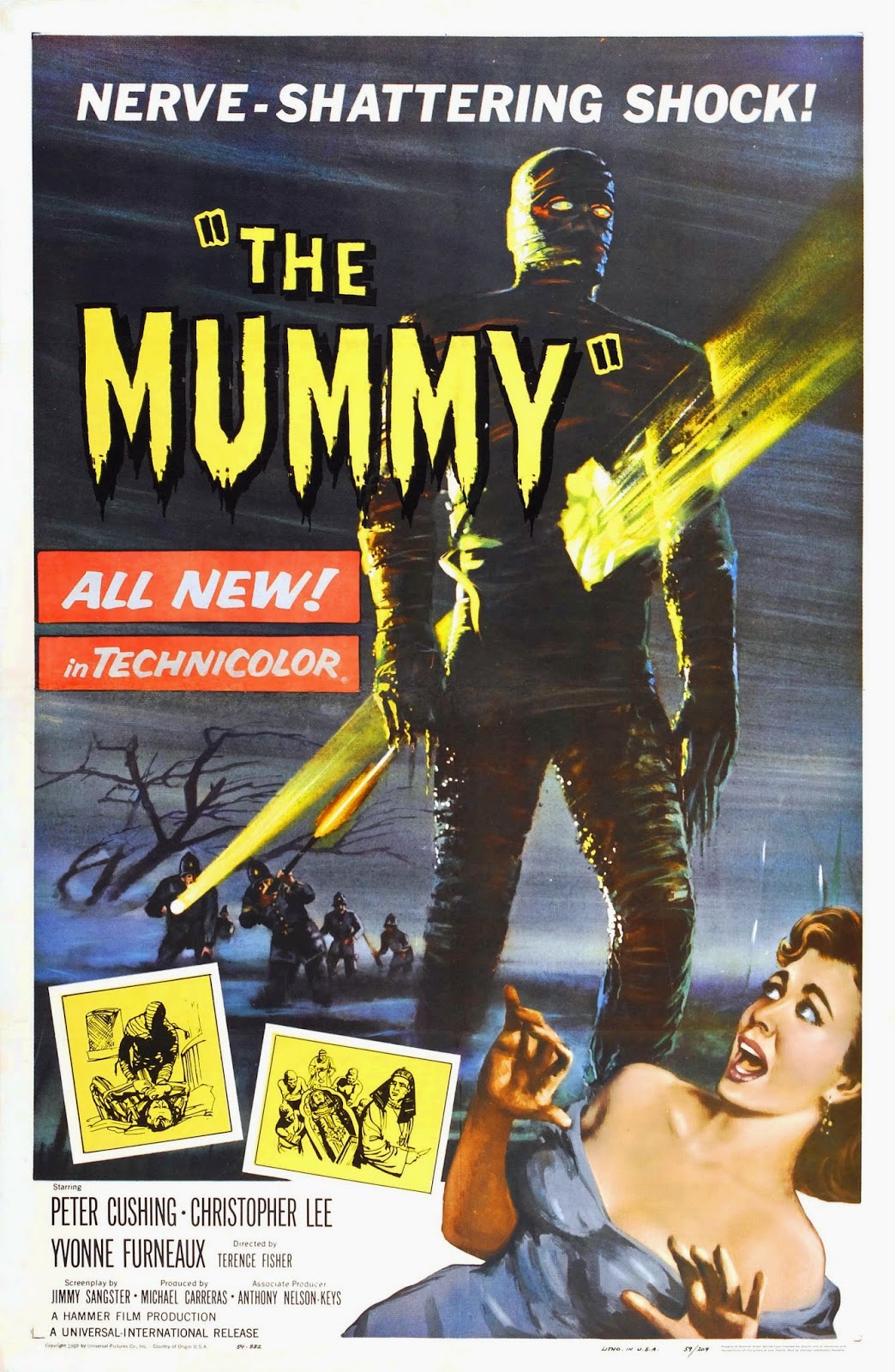 With the great successes of The Curse of Frankenstein and Dracula (1957 and 1958 respectively), Hammer Studios' next Gothic horror turn would be yet another remake of a Universal horror film. This time the studio would be filming The Mummy, the subject of this review for Peter Cushing Month.

Before we go onto the review proper, I feel that a little bit of history is needed. Universal Studios' The Mummy was a great success upon its initial release in 1933. Boris Karloff, coming off of the recognition which came with his portrayal of the Frankenstein Monster in 1931's Frankenstein was a solidified as an international star and he became known as "Karloff the Uncanny." Curiously, Universal never made a sequel to the much-loved film, and when they did revisit the Mummy, it was an entirely different story. 1942's The Mummy's Hand, the first in Universal's new Mummy series is a personal favourite of this writer, and Hammer's 1959 remake owes a quite a bit to that film as well as its subsequent sequels.

The Mummy (1959) begins in Egypt, 1895. Archaeologist Stephen Banning (Felix Aylmer) is determined to find the tomb of Egyptian High Priestess Ananka. After months of futile digging, he and his brother Arthur (Raymond Huntley) and his son John (Peter Cushing) uncover the long lost tomb, but no sooner has Banning set foot inside the tomb does he suffer a nervous breakdown and go mad. Three years later, Banning, know residing in a mental institution calls for his son John, warning him of a mummy who is out to kill all those who desecrated Ananka's final resting place. John believes these are the ravings of his disturbed father, but when Banning is found murdered, John starts to think that there may be some credence to his father's story.

The Mummy strikes different chords within me. It is sadly one of the few Hammer horror film I have seen which I cannot give universal praise. While it is by no means a bad movie, it is far from perfect, and I think its main problem lies within its plot. Whereas other Hammer horrors boasted fantastic, suspenseful plots, The Mummy features a story which is far more languid and leisurely paced. Little suspense can be wrought from the plot, and when the film surges into a flashback, it feels as though the action has come to a dramatic and unnecessary halt.

The cast does make up for some of the story's faults, though not entirely. Peter Cushing is good as John Banning, though he is a bit too old to be playing the character. Cushing was naturally a very mature actor and in all of his scenes he comes across as being akin to his performances as Van Helsing or Sherlock Holmes in that he is ready to take on whatever the ancient Egyptian Gods throw his way. There is nothing wrong with the performance, but I felt as though John Banning should perhaps have been a bit more naive and a bit less likely to grasp the concept of ancient curses and a mummy back from the dead.

The other star attraction is, of course, the Mummy, played by Christopher Lee. As Kharis, an ancient Egyptian high priest, who defiled the Gods in trying to restore his love Annaka to life, Lee's mummy is a force to be reckoned with. Physically Lee is very imposing, using all of his six feet four inches to his best advantage as the unstoppable mummy, but he seems underused in the film. During the flashback set in ancient Egypt, Lee seems slightly uncomfortable as the high priest, but the same seems to apply to all of the actors dressed in ancient garb during this sequence.

The rest of the cast is pretty unmemorable, though their acting is fine. Yvonne Ferneaux is severely underused as John Banning's wife Isobel and Eddie Byrne is pretty "by the numbers" as a police inspector. George Pastell walks away with top honours in this film as the determined follower of the ancient Egyptian Gods who unleashes the mummy on the world. The scene in which he confronts Cushing's Banning is probably the film's highlight.

In all, The Mummy is not a bad film but it suffers from a slow plot and under-developed characters. Despite the valiant efforts of both Peter Cushing and Christopher Lee, the film cannot overcome these problems. But, I implore you not to come away thinking this movie is a train wreck. There are some show-stopping moments and it serves its main purpose to entertain its audience. Therefore I give The Mummy 3 out of 5 stars.
Posted by Nick Cardillo at 3:43 AM