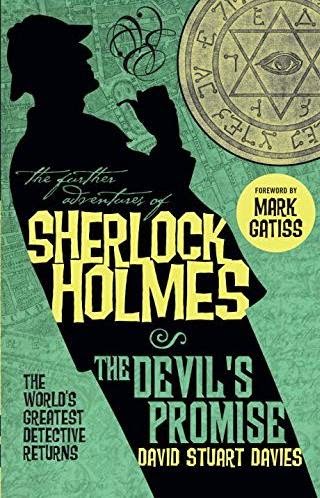 The Devil's Promise is perhaps best described as an unconventional Sherlock Holmes pastiche. I might as well say now that I enjoy unconventional pastiches. If handled correctly, these novels can provide some extraordinarily entertaining reading. Written by David Stuart Davies, one of my favourite Sherlockian writers, The Devil's Promise features Holmes and Watson entangled in a most unorthodox problem. How did it fare overall? Let's find out.

On holiday in the English seaside, Sherlock Holmes and Dr. Watson are soon embroiled in a mystery. The duo discover a body on a secluded beach, which promptly disappears. Deciding to investigate, Holmes and Watson soon find that the residents of the sleepy seaside hamlet are behaving oddly, seemingly intimidated by the Blackwood family who live in a secluded mansion outside of town. According to local lore, the Blackwood's father was a renowned Satanist who tried to conjure the Devil during a black mass. Sensing a potential lead, Holmes and Watson are prepared to investigate further when they are attacked in their rented cottage. In the struggle Watson is knocked out cold.

When the good doctor comes to, he discovers that months have passed. Returning to Baker Street with Holmes, Watson finds that his friend's personality has changed dramatically - the detective is far more distant and cold. What could have caused this change in character, and what happened after the two men were attacked months earlier? Watson will set out on his own to discover the truth, putting not only his life in jeopardy, but Sherlock Holmes' as well.

The Devil's Promise summed up in the above two paragraphs clearly shows that it is a different breed of Sherlock Holmes pastiche. However, I was drawn into the mystery almost from the beginning and I found myself finishing the novel in only a few sittings. While it may not please the most conservative of Sherlockians, the novel was obviously written by an ardent Holmes fan who managed to craft an ingenious plot around Holmes and Watson. There were many twists and turns in the plot which made for edge-of-your-seat reading, and the idea that Watson is alone in his investigation, unable to trust Holmes added much tension to the story.

The twisting plot was complimented by wonderful atmosphere. The book was filled with a sense of foreboding, impending doom which practically jumped off of the page. Just as Davies' Sherlock Holmes-vs.-Dracula novel The Tangled Skein was an obvious homage to Hammer horror films, The Devil's Promise fit the same mold. There were several Gothic nuances throughout the story and the climax was the typical blood-and-thunder set piece seen in a Hammer horror. The book particularly mirrored Hammer's 1968 film The Devil Rides Out which starred Christopher Lee fighting the forces of the Devil and a group of insane Satanists.

While the book was quite good, it's plot did make a few things difficult. There were few scenes which Holmes and Watson shared together and seldom were the detective's deductive prowess put on show. But, these were all compromises which had to be made considering the novel's plot. Therefore, I happily say that David Stuart Davies has delivered once more. The Devil's Promise is filled with twists and unexpected turns and tremendous Gothic atmosphere. I give the book 4 out of 5 stars.
Posted by Nick Cardillo at 8:12 AM