Review - "Sherlock Holmes and the Horror of Frankenstein" 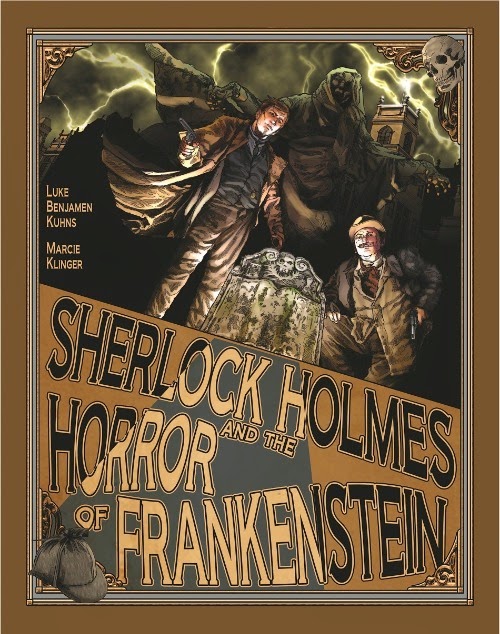 There are certain characters who Sherlock Holmes has run across a number of times: Dracula, Dr. Jekyll and Mr. Hyde, Arsene Lupin etc. However, there is one literary character with whom the great detective has seldom matched wits - Frankenstein and his Monster. This in retrospect, this makes some sense. Mary Shelly's novel is not set in metropolitan London, and it set some seventy years before Holmes took up his magnifying glass and deerstalker. However, that doesn't mean that some authors haven't tried to combine this famed characters into one story. Luke Benjamin Kuhns' Sherlock Holmes and the Horror of Frankenstein does just that. How does it fare? Let's find out...

It is 1885 and a spat of grave robberies have startled London. Sherlock Holmes, in the midst of a bout of great ennui, is disinterested in case. That is until he's approached by Inspector Bradstreet of Scotland Yard. It seems that at the scene of the latest grave robbery, a night watchman has been murdered. His curiosity sufficiently piqued, Holmes and Watson begin their investigation. The murdered man's face betrays signs of tremendous horror, and upon further investigation Holmes discovers a giant footprint nearby. By the detective's estimation, the man's murderer was at least eight feet tall. Who is the murderer? What do they want with the bodies, and is there a connection with the infamous Dr. Frankenstein?

Despite the fact that this graphic novel shares a title with one of Hammer horror's lesser-known works, it owes more to the style of the Universal horror films of the '30's and '40's. There's a genuine sense of mystery, adventure and horror mixed into the plot. Plot tropes from Universal's films are mixed in from the mad scientist and his lab. I won't spoil the story, but one character who appeared in one of Universal's most famed Frankenstein films turns in a wonderful appearance here. Despite its horror story trappings, author Luke Kuhns manages to weave an excellent Sherlockian plot and his presentation of the characters through dialogue is excellent. I am not very familiar with Kuhns' writing, but this makes me interested to look into more.

As I mentioned above, this is a graphic novel. Illustrator Marcie Klinger did an excellent job in capturing the Gothic atmosphere of the story. The artwork is dark and evocative and very nicely detailed. However, I was rather surprised to find Sherlock Holmes dressed in a standard twentieth-century trench coat though!

Without giving away too much plot, Sherlock Holmes and the Horror of Frankenstein gets around the logistical problems of combining these two famous stories by acting as a sequel to Mary Shelly's original. For fans of Frankenstein, some of the characters some of the original novel pop up in flashback and fill in some of the gaps. In this way, the story is able to work on its own without trying to limit itself to the confines of a previously-published work. I applaud the original story telling, especially since I had no idea what to expect going into the graphic novel.

In all, Sherlock Holmes and the Horror of Frankenstein is a very surprising work. Author Luke Kuhns is obviously well-versed in both his Sherlockian and horror film knowledge. With an interesting, original plot, and moody (though at times anachronistic) artwork, the graphic novel comes recommended from me. I give it 4 out of 5 stars.

Sherlock Holmes and The Horror of Frankenstein is available from all good bookstores including   Amazon USA, Barnes and Noble USA, Amazon UK, Waterstones UK, and for free shipping worldwide Book Depository. In ebook format it is in Amazon Kindle, Kobo, Nook and Apple iBooks (iPad/iPhone).
Posted by Nick Cardillo at 8:39 AM