A Most Unusual Introduction 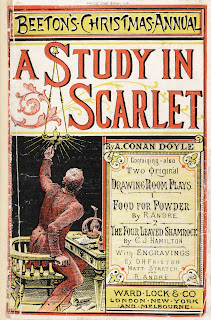 There was only one student in the room, who was bending over a distant table absorbed in his work. At the sound of our steps he glanced round and sprang to his feet with a cry of pleasure. “I've found it! I've found it,” he shouted to my companion, running towards us with a test-tube in his hand. “I have found a re-agent which is precipitated by haemoglobin, and by nothing else.” Had he discovered a gold mine, greater delight could not have shone upon his features. “Dr. Watson, Mr. Sherlock Holmes,” said Stamford, introducing us.


"A Study in Scarlet" is where it at all began. Arthur Conan Doyle, a young medical man with more time on his hands than he warranted, took to writing and what emerged became the first in an incredibly lengthy series of short stories and novels all featuring Sherlock Holmes. What's more, this one novella would spawn generations of other writers and filmmakers and eventually Sherlock Holmes would become a household name. But, what is interesting to note is that "A Study in Scarlet" isn't your typical origin story. In a work which introduced readers to the world's greatest and only Consulting Detective, the hero isn't present for half the story.

Don;t get me wrong - "A Study in Scarlet" is a fine piece of writing and without it, I wouldn't have a favourite fictional character to blog about. But in terms of plot structure, the novella is at first glance very unusual. I cannot speak for others, but I feel that the first part (the actual mystery) is far more interesting than the back-story set in Salt Lake City, Utah. While this second half is imperative in the grand scheme of things as it chronicles the killer's motivations, after seven chapters of investigating, it's rather jarring. In retrospect, the second half of "A Study in Scarlet" is perhaps not as surprising as it seems. Prior to writing "A Study in Scarlet," Arthur Conan Doyle was well-versed in adventure stories. Most notably among these works is "The American's Tale" is a thoroughly out-of-this-world story detailing the narrator's run-in with...giant, man-eating Venus Flytraps. No - I'm not joking.

This form of story-telling would come in handy for Conan Doyle with his novels to come, most specifically "The Valley of Fear." In fact, to the Sherlockian novice, the two stories could possibly be confused for one another. Both novels begin with Sherlock Holmes and Dr. Watson investigating a strange murder in a locked house. There's a mysterious presence of blood involved in the mystery. The man responsible for the murder is apprehended half way through the novel, and the second half of the story does not feature Holmes or Watson and is set entirely in America.

The real question is, which I sort of answered above, is why didn't Conan Doyle sum up the murder's motives in a simple confession? That would simplified things a bit - and made his story much easier to adapt to the screen (although that was the furthest thing from Doyle's mind when he writing I'm sure). I still stand by the answer that Doyle was most comfortable with adventure stories and the fact that he was fascinated with the United States of America, makes the second portion of Sherlock Holmes' debut novel a bit easier to understand. But what is incredibly fascinating is that Doyle had little intention of continuing the saga of his great characters beyond this one novel. He ends the novel with a relaxing night at Baker Street, Dr. Watson vowing he must set the adventure down on paper. It's a nice ending which certainly leaves tings open for more, and yet Doyle would have to be coaxed into writing "The Sign of Four" by the editor of Lippincott's Magazine  a few years later.
Posted by Nick Cardillo at 6:38 AM