Review - "The Masks of Death" 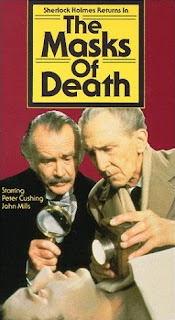 Sherlock Holmes in his golden years seems to have inspired many a writer and filmmaker. Arthur Conan Doyle himself took a keen interest in his creation's later years in such stories such as "The Lion's Mane" and "His Last Bow: An Epilogue of Sherlock Holmes." Author, Laurie R. King's book, "The Beekeeper's Apprentice" is set while Holmes is in retirement and spawned a lengthy series. On film, Christopher Lee starred alongside Patrick Macnee in two made-for-television films, "The Golden Years of Sherlock Holmes" and then before that there was "The Masks of Death" - Peter Cushing's last turn as the world's greatest detective and the subject of today's review.

Europe is on the brink of war. Sherlock Holmes (Peter Cushing) has retired from detective work, but while on a visit to London from the Sussex Downs, Holmes is asked by Inspector McDonald (of "The Valley of Fear" fame) to investigate the mysterious deaths of three men in Whitechapel - each one bearing no signs of violence upon their bodies. What's more, each man has a look of horror upon their face. No sooner have Holmes and Watson (John Mills) embarked on the case are they asked by the Home Secretary (Ray Milland) and a German Diplomat (Anton Differing) to look into the disappearance of a German noble from a country estate. Upon arrival in the country, Holmes and Watson discover that Irene Adler (Anne Baxter) - the woman is among the honoured guests.

What is most notable about "The Masks of Death" is that it was Peter Cushing's last turn in the role of detective. Filmed in 1984, Cushing was 71 at the time of filming, but seems considerably older. Cushing was lured out temporary retirement to star in the movie, and though he gives an adequate performance, it is certainly not his best. In his old age, Cushing's Holmes has become rather grumpy and grouchy with a short temper. While the actor's prickly performance of the detective worked well in 1959's "The Hound of the Baskervilles," this aged Holmes simply doesn't strike a chord with this reviewer. John Mills makes for a fine Dr. Watson, who in the film's prologue, requests the aide of a secretary to write down the adventure due to arthritis in his hands.

One of the film's most interesting aspects is how it handles the relationship between Holmes and Irene Adler, who are clasping eyes on each other for the first time in many years. Quite rightly so, Holmes seems distrustful of the American opera star, vowing "I am never bested twice." The chemistry between Anne Baxter and Peter Cushing is good, and though Baxter is billed in the film as "Special Guest Star" her role is far more substantial than Ray Milland's, who shares a similar billing title. Milland was in ill health at the time of filming and he died at the age of 79 two years later. Peter Cushing was also reunited with some veterans of Hammer Studios while filming most notably Anton Differing and the film's director, Roy Ward Baker.

While "The Masks of Death" must be commended for some fine original concepts, it's presentation is pretty cockeyed. No sooner have Holmes and Watson investigated the mysterious deaths of three men are they called away on another case entirely. If you're an armchair detective in training then you'll probably be able to guess that the two cases, though seemingly unconnected are. I don't want to give the impression that this is a terrible made-for-television film, but it's certainly not the best. I give it 3 out of 5 stars.

Interestingly, following the release of "The Masks of Death," a second Sherlock Holmes film reuniting Peter Cushing and John Mills was in the works. Entitled, "The Abbott's Cry," the mystery would feature a mysterious curse and a la "The Hound of the Baskervilles," Holmes would send Watson out into the country to investigate. Cushing turned down the project, and Ian Richardson, who'd just starred as Holmes in two television films, was approached, but nothing came to fruition. Rumour has it, the script is still lying around waiting to be made...

Notes: "The Masks of Death" is an incredibly obscure piece of television. There has never been an official DVD release, and VHS copies are few and far between. Luckily, the movie does get uploaded onto YouTube every once and a while, so if you're anxious to see this made-for-television movie, the Internet is your best bet.

Posted by Nick Cardillo at 5:30 AM