Doctor Who: A Journey in Time and Space 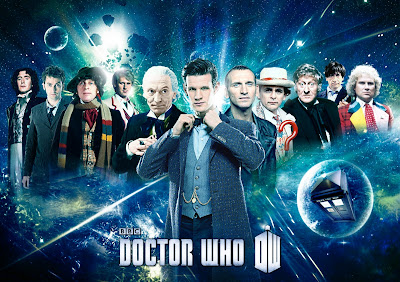 Do you know like we were sayin'? About the Earth revolving? It's like when your a kid. The first time they tell you that the world's turning and you just can't quite believe it 'cause everything looks like it's standin' still. I can feel it. The turn of the Earth. The ground beneath your feet is spinning at a 1,000 miles an hour and the entire planet is hurtling around the sun at 67,000 miles an hour and I can feel it. We're fallin' through space, you and me, clinging to the skin of this tiny little world, and if we let go...That's who I am. - The Ninth Doctor "Rose"


I love Doctor Who. Aside from anything Sherlock Holmes-related on television or film, it's my favourite t.v. show. Surprisingly, for the longest time I never watched it - partially because the show has been on for 50 years. To the novice, one is liable to be lost in the seemingly endless number of stories and episodes and Doctors. In the past few years, the show has gained more notoriety and popularity, especially in America and New Zealand. Today, I take on the great task of taking you on a journey - a journey with time and space.

Where does one begin? I suppose the best place to start is on 23 November, 1963. A constable meanders down a fog-shrouded street, on a road skirting Foreman's Junkyard on Totter's Lane. This image is the first one to greet viewers of a seemingly run-of-the-mill science fiction show. I am sure that anyone gathered around their television sets on the 23rd of November had no idea that the show they were watching would eventually turn into a phenomena. My association with the show began some two years ago, when after having heard plenty of great things about the program, decided it was about time to give it a try. But where to begin? I settled on "The Talons of Weng-Chiang," a six-part serialized story which debuted in 1977 and starred Tom Baker as the Fourth Doctor (the review of which can be read here). Despite the fact that I loved the story, it took me some time before I gave the revived series which began in 2005 a chance.

26 March, 2005. The return of Doctor Who to television is almost exclusively due to one man - Russell T. Davies. Doctor Who had gone off the air in 1989 - returning only once for a 1996 American-made t.v. movie. Davies gave the show a jolt of life, bringing it to a new audience. Cast as the Ninth incarnation of the Doctor, an alien called a Time Lord, was Christopher Eccleston. Eccleston's darker was much darker than his previous incarnations, as he is the last member of his race - all of them having died in the great Time War, the details of which are still surrounded in mystery. The episodes from this first series are some of the show's best - being penned by writers such as Mark Gatiss, Steven Moffat and Robert Shearman.

At the end of the series, Eccleston left the show - regenerating (a Time Lord trick in which they can change every cell in their body) into David Tennant who played the Tenth Doctor. Tennant has since then become a fan favourite, as he played the Doctor for four seasons worth of episodes. In his time, the Tenth Doctor encountered Daleks, Cybermen, Agatha Christie, William Shakespeare, rhinos on the moon...and the Devil himself! These action-packed, exhilarating adventures came to an end when the Doctor regenerated into Matt Smith, who as it currently stands, is my favourite Doctor. The show, now under the helm of Steven Moffat, was loaded with story-arcs and "timey wimey" goodness. Now the Doctor cross paths with vampires, living statues, Vincent Van Gough, Winston Churchill and many more. Since it was announced that Tennant would join Smith for the upcoming 50th anniversary, and Peter Capaldi would replace Smith come Christmas, the world has been anxiously waiting for Doctor Who.

This synopsis of the show's lengthy history hardly scratches the surface. Doctor Who is a complex, truly engaging show, and if you have not checked it out at some point, I really suggest that you do so. But where do you begin? If you value my opinion, I say the beginning of the revived series which began in 2005. It's an excellent jumping-on point for the show and it showcases what makes Doctor Who so great - each episode is very different. One minute you're witnessing the end of the Earth and the next you're in Victorian England. Doctor Who is an unpredictable show, constantly changing and forever keeping you on the edge of your seat. If doesn't sound like the perfect pitch, I don't know what does.

23 November 2013 - the latest chapter in Doctor Who's history is being written even as I type these words. Right now, the show has become more popular than ever. Only recently was the first poster for the show's 50th anniversary released, and frankly I'm quite excited. If the word through the BBC grapevine is to be believed, then the anniversary special will change the show's history forever. What exactly that means is a matter of debate and speculation is rampant across the Internet. Nevertheless, the ultimate Doctor Who celebration has commenced.

"Alright then, that's what I'll do. I'll tell you a story...You feed on them. On the memory of love and loss and birth and death and joy and sorrow. So, come on then. Take my memories. But I hope you've got a big appetite, because I've lived a long life, and I've seen a few things...I walked away from the Last Great Time War. I marked the passing of the Time Lords. I saw the birth of the universe and I watched as time ran out, moment by moment, until nothing remained. No time, no space - just me. I've walked in universes where the laws of physics were devised by a madman. I've watched universes freeze and creations burn. I have seen things you wouldn't believe. I have lost things you'll never understand. And I know things. Secrets that must never be told, knowledge that must never be spoken, knowledge that will make parasite gods blaze! So, come on then! Take it! Take it all, baby! Have it! You have it all!" - The Eleventh Doctor "The Rings of Akhaten"


Who knows how long Doctor Who will remain a part of our culture. Whether Doctor Who will still be around for a 100th anniversary is not for me to say, but I have a feeling that the story of the time travelling alien - the mad man in a box, the saviour of the universe - has only just begun.
Posted by Nick Cardillo at 3:48 AM