Review - "Ghosts of Christmas Past" 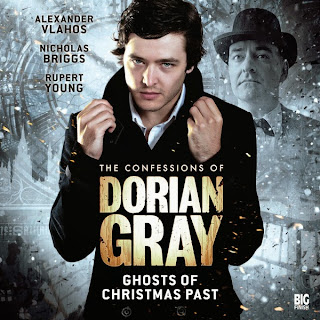 It is the Christmas of 1912. Dorian Gray (Alexander Vlahos) is returning to London after an extended stay in Europe. His trip turns sour however when his portrait, a painting of great importance to Dorian is stolen from his hotel. Those who have stolen the portrait have only one request for Dorian - he must kill Sherlock Holmes. Meanwhile, Holmes (Nicholas Briggs) had returned to London for a brief visit from his home on the Sussex Downs to spend Christmas with Mycroft. Taking up lodgings temporarily at Baker Street once more, Holmes spies a man loitering outside, a man who resembles Professor James Moriarty. How could the Napoleon of Crime be alive 20 years after his death at the Reichenbach Falls? Dorian Gray and Sherlock Holmes will have to join forces to find out.

Dorian Gray, an impressionable young man who sells his soul in order to remain forever young while his portrait ages, was the product of Oscar Wilde's imagination. Wilde's only published novel, "The Picture of Dorian Gray" was published in Lippincot's Magazine in the July of 1890. Today considered a masterpiece of horror and symbolism, the character of Dorian Gray has taken on new life in the form of Big Finish's audio series, "The Confessions of Dorian Gray," all of which starring Alexander Vlahos. I have not listened to any of the other installments in the series, so I cannot compare them to "Ghosts of Christmas Past," yet if they are anything like this audio, then they are very enjoyable.

According to David Stuart Davies' excellent book, "Starring Sherlock Holmes," screenwriter Alan Cubbitt was considering writing a Sherlock Holmes-vs.-Dorian Gray story following the 2002 version of "The Hound of the Baskervilles." Cubbitt scrapped the idea, claiming that the supernatural events present in Wilde's novel made it hard to fit into the Conan Doyle canon. This problem did not seem to daunt Tony Lee, writer of "Ghosts of Christmas Past." Supernatural had been present in Big Finish's other Sherlock Holmes audios, most notably the Sherlock Holmes-vs.-Dracula story, "The Tangled Skein," so it perhaps doesn't seem too far out of place here. As per Doyle, Holmes is presented throughout as skeptic, and his discounting of the otherworldly doesn't change even when faced with overwhelming evidence.

Nicholas Briggs is great as Holmes, though the detective is more of a secondary character this time around. The real star is Alexander Vlahos as Dorian Gray, and he does a fine job. I am somewhat surprised that Dorian was presented in something of a sympathetic light here, and I'd say my biggest quibble is that Vlahos simply did not convey the "evil" side of Dorian Gray. Particular credit is due to Rupert Young as Moriarty, who is thoroughly menacingly as the Napoleon of Crime. I only wish that Young could have been provided more material. Moriarty is such a ripe character and the performance is so good, it's a shame that there isn't more for him to do. It seems as though Holmes' arch-enemy was thrown into the mix to pad out the story's running-time.

Nevertheless, "Ghosts of Christmas Past" was an excellent Big Finish audio recording. It is a great addition to Nicholas Briggs' Sherlock Holmes repertoire, and boosts fine acting, writing and plotting. The story is wrought with suspense and I will not lie - it had me on the edge of my seat as the audio reached its climax. I do not hesitate giving "The Confessions of Dorian Gray: Ghosts of Christmas Past" 4 out of 5 stars. As I mentioned above, this audio marked my first exposure to Big Finish's Dorian Gray series, and I hope that it is not my last.
Posted by Nick Cardillo at 3:48 AM