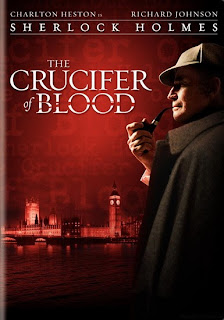 Charlton Heston is certainly a memorable actor. During the 1950's, he more or less made a living off of starring in a movies of epic proportions such as "Ben-Hur" (for which he won an Oscar) and "The Ten Commandments." The list of memorable films in which he starred is certainly not limited - Heston was the lead in "Touch of Evil," Planet of the Apes" and "Soylent Green." Heston was also a political activist who campaigned for civil rights in the '60's. But the question is this - does a good actor necessarily make a good Sherlock Holmes?

The same actor who played Moses would don the deerstalker and Inverness cape for the Los Angeles tour of Paul Giovanni's play, "Sherlock Holmes and the Crucifer of Blood." The tour, which ended in 1981, would not be Heston's last association with the character though. Ten years later, he reprised the part on television in a made-for-television adaptation opposite Richard Johnson, Susannah Harker and Simon Callow. The film is a direct scene-for-scene adaptation of Giovanni's play which opens during the Indian Rebellion of 1857. Major Alistair Ross (Edward Fox) and Major Neville St. Clair (John Castle) become embroiled in the murder of a prince's consort and the theft of his treasure. Stealing the riches from their compatriot, Jonathon Small (Clive Wood), Small vows his revenge - putting a curse on the diamonds and rubies which the two men so coveted.

Thirty years later, Ross has become a cynical invalid and St. Clair has been driven to opium. St. Clair's daughter, Irene (Susannah Harker) goes to Sherlock Holmes (Heston) and Dr. Watson (Richard Johnson) for help when her father receives a letter in a post - a strange cross-shaped mark upon it - etched in blood. Travelling to Ross' country house for answers, Holmes and Watson are just in time for his murder. Is the vengeful Small up to no good - or are more sinister goings-on transpiring before the great detective's eyes?

If you ask me, Giovanni's play is by far the best Sherlock Holmes stage play I have come across. The story is obviously inspired by Arthur Conan Doyle's "The Sign of Four," but is changes most of the characters names, motivations and relationships. Changing the details of the story manages to streamline the novel, making it easily adaptable to the stage. The only problem the film encounters is it cannot escape its stage origins. Unlike others play-into-movie films ("12 Angry Men," "Sleuth" and others), the action is not entirely confined to the sets. Therefore, events important to the plot transpire off-screen, making for some very clunky entrances and exits from the actors. What's more, the boat chase on the River Thames, the highlight of the stage play, is dealt with as though it were an afterthought.

Somewhat surprisingly, Charlton Heston makes for a pretty good Sherlock Holmes. He is hardly the epitome of the character on screen, but he gives a reasonable stab at the part. The only problem with his performance is that he was too old to play Holmes. Heston was 68 at the time of filming, which wouldn't be too bad, but Holmes and Watson should have been portrayed as young men throughout the story. There are times when Heston's Holmes seems less like the world's greatest detective and more like the world's greatest grouch. Richard Johnson, who plays Watson, also takes a reasonable stab at playing the part, but he is too old for the part too, especially if Watson is supposed to fall in love with Irene St. Clair. Due to the fact that Richard Johnson is forty-odd years Susannah Harker's senior, any romantic scenes between the two are quite cringe-worthy.

That's not to say that "The Crucifer of Blood" is all bad. Simon Callow is on hand to play a wildly over-the-top Inspector Lestrade, who though gratingly dim-witted, is quite entertaining. The show-stopping murder scene is quite effective, played out in the darkness with moonlight shining in through a set of French-doors. Holmes' reconstruction of the crime, set entirely in the same room, lit only by candlelight is particularly moody and the whole film is lifted by a brilliant, haunting score. This elevates "The Crucifer of Blood" to be a very enjoyable, though at times flawed, Sherlockian film. I give it 4 out of 5 stars

Posted by Nick Cardillo at 3:41 AM