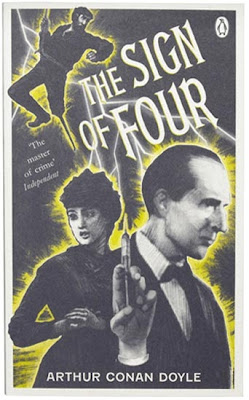 In my humble opinion, "The Sign of Four" is a masterpiece. Of all of Doyle's novels, this one if perhaps the most original. The fact that it manages to cross a number of genre lines is excellent, making it perhaps the most entertaining of the four original Sherlock Holmes novels. But, let's take a closer look.

"The Sign of Four" was originally published in 1889, two years after the first publication of the Sherlock Holmes debut novel, "A Study in Scarlet." When the two stories are compared, they couldn't be more different. "A Study in Scarlet" is a conventional mystery with a very unconventional back-story. "The Sign of Four" begins as a mystery, becomes a Gothic thriller and finishes off being a wildly entertaining adventure as the story nears its finale. The fact that the story crosses these genre lines is what makes this novel so interesting. I love the uniqueness of the whole thing. It is by far the most unconventional (in a good way) story in the entire Sherlock Holmes canon.

Aside from the unique aspects to the novel's plot, "The Sign of Four" is also one of the most historically important Sherlock Holmes stories. For the first time in print, Sherlock Holmes is portrayed taking drugs. The opening scenes of the novel go quite in depth on the detective's drug use - a topic which is not covered much more in other Doyle stories. Yet this side to Holmes' character has been extrapolated by many other writers since then. The opening paragraph of "The Sign of Four" runs thus:

SHERLOCK HOLMES took his bottle from the corner of the mantelpiece, and his hypodermic syringe from its neat morocco case. With his long, white, nervous fingers he adjusted the delicate needle and rolled back his left shirtcuff. For some little time his eyes rested thoughtfully upon the sinewy forearm and wrist, all dotted and scarred with innumerable puncture-marks. Finally, he thrust the sharp point home, pressed down the tiny piston, and sank back into the velvet-lined armchair with a long sigh of satisfaction. 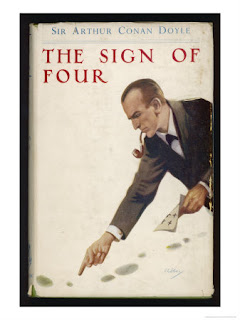 To be perfectly honest, Holmes' drug use has become too associated with the character recently. As a rule, Holmes would only partake in the artificial stimulants when he was filled with ennui - yet this fact seems to have been lost since then. Of late, Sherlock Holmes and drugs seem to be linked much like the deerstalker hat. However, I do find the character's use of cocaine to be interesting characteristic as it surely sets Holmes apart from other detectives in print at the time. It shows that Holmes could succumb to the power of drugs, making him a quite flawed individual and goes some way to humanise him without doing so too much. (If any of you weren't sure, the above paragraph was not advocating drugs in any way, shape or form)

The other reason that "The Sign of Four" is of canonical importance is the fact that it introduces Mary Morstan. To the uninformed reader, Miss Mary Morstan, who starts as Holmes' client, winds up being Watson's wife by the closing pages. In the grand scheme of things, Mary Morstan is very important to the canon as she is Dr. Watson's only named wife. Again, I feel I must explain myself. It has been a matter of debate among Sherlockian scholars as to how many times Dr. Watson was actually married. The general consensus was twice, though the name of the second Mrs. Watson was never given. The exact number of the good doctor's spouses will never be known (Arthur Conan Doyle wasn't a stickler about continuity). Lately, Mary Morstan has become something of a key player in Sherlock Holmes-related media - she was featured prominently in both Warner Bros.' films directed by Guy Ritchie and she will be introduced in the upcoming third series of "Sherlock."

As I mentioned above, "The Sign of Four" is by far the most outrageous of all the Sherlock Holmes stories (which is saying a lot), but the outrageous nature makes it all the more enjoyable. Seeing Holmes and Watson trail the villains through London with the aide of Toby, a bloodhound, is a very fun tableau and the climactic boat chase on the River Thames, is one the best action set pieces of the canon. So the question arises - why hasn't this novel been adapted to the screen as often as other Sherlock Holmes stories? Let's review some statistics: In 99 years, "The Hound of the Baskervilles" has been adapted to the screen 27 times. In that same space of time, "The Sign of Four" has only been adapted eleven times. Is the outrageous nature of the novel simply too much for filmmakers to stomach? I don't know if I'd say that.

One of my favourite movie versions of "The Sign of Four" is the 1983 t.v. film starring Ian Richardson as Sherlock Holmes and David Healy as Dr. Watson. While it is not the most faithful adaptation of Doyle's novel, it's one of the most enjoyable as it goes all-out in an attempt to make the story a blood-and-thunder Gothic thriller, much like the original. Thus, there is an additional murder, a chase through a hall of mirrors and a fight on a merry-go-round a la Alfred Hitchcock's "Strangers on a Train" (1951).

Perhaps the most endearing example of "The Sign of Four's" longevity is how it has inspired the works of other Sherlockian writers. Paul Giovanni, who I ranked among the top five best Sherlock Holmes writers aside from ACD, (click here to read that analysis), authored the play "The Crucifer of Blood" which is a loose adaptation of Doyle's novel. The play debuted in the late '70's starring Paxton Whitehead as Holmes and Glenn Close as Mary Morstan. The show gained much fame when it opened in Los Angeles when Charlton Heston took on the role of the detective and Jeremy Brett played Dr. Watson. Heston would reprise the role of the Holmes in a 1991 made-for-t.v. version of the play which I will be reviewing on this blog fairly soon.

So, what do you think of "The Sign of Four?" It is the most unconventional, but by far the most entertaining original Sherlock Holmes novel. It is for that reason I have cited it as A Portrait of Perfection, and an excellent representative of Doyle's Sherlock Holmes canon.
Posted by Nick Cardillo at 3:45 AM