Review - "Doctor Who: Touched by an Angel" 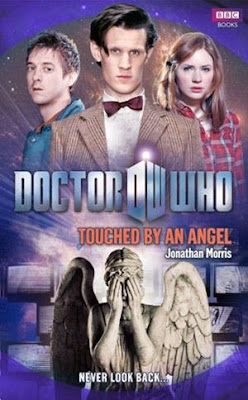 "Touched by an Angel" is quite brilliant. That is the only way I could possibly consider starting this review. It is only the second Doctor Who novel which I have finished (despite the fact that I own quite a few), but it was a fantastic book. It's full of wonderful, real characters, a fine plot and is actually quite thought-provoking. This review will also focus on the fine audiobook version which I bought on Audible.com which was performed by Clare Corbett. So, let's take a closer look.

Mark Whitaker is an ordinary man. He is employed at a London law firm, and goes through day-to-day life without incident. That all changes when he receives an envelope in the mail - enclosed are wads of bank notes and a letter, written in his own handwriting. The letter includes a list of instructions which if followed will allow Mark to save his wife - who died in a car accident nine years earlier. Soon, Weeping Angels are on his trail and there is only one man who can save him - the Doctor.

What works best about "Touched by an Angel" is its characters. Mark is the central character of the novel and he is a very identifiable, very real man. As we're introduced to him, you cannot help but feel so bad for Mark and his lose. Given the opportunity to save his late wife, one wonders if they would jump at any similar opportunity (though this is a sci-fi novel). While we're on the subject of characters, the representation of the Doctor, as played by Matt Smith, is excellent. The same must be said for Amy Pond and her husband Rory, the Doctor's companions. Author Jonathon Morris has captured the actor's voices brilliantly, and he manages to weave these characterisations with his original ones.

The plot of "Touched by an Angel" is also interesting. In terms of Doctor Who, it is unusual as the Doctor travels back in time and follows Mark Whitaker throughout different stages of his life. While this may not sound incredibly exciting, it is very interesting. The plot further adds depth to the characters. This low-key, character-driven story is indeed at odds with the typical Doctor Who story, and I think that it would be difficult to adapt to the screen. That's not to say that it wasn't an entertaining book - just a different one.

Sadly, the book wasn't perfect. Scenes set in the 1990's include just about every possible '90's reference or cliche. And whenever the plot picked up some steam (towards the end), it felt at odds with the rest of the story. I also cannot help but feel that Jonathon Morris likes the Weeping Angels too much as they crop up everywhere in the story. As opposed to their appearances on TV, the Angels are not used sparingly here, and this does diminish their creepiness.

As I wrote at the top of this review, I listened to this book via the audio version available on Audible.com. The novel was read by Clare Corbett who did an excellent job, giving each other their own distinctive voice. She also managed to do an excellent impression of Matt Smith's enthusiastic Eleventh Doctor and Karen Gillan's Amy Pond. My only complaint would be that her voices for other male characters did fall a little flat as it sounded like she was out of breathe speaking their parts. Nevertheless, Corbett did a fine job and I wouldn't say no to listening to another Doctor Who she reads.

"Touched by an Angel" was an excellent Doctor Who story. It features some fine characters and plot elements and the story cannot help but make you feel a number of emotions. It was a grand book and I hope to finding more Doctor Who-related items penned by Jonathon Morris. "Touched by an Angel" receives 4 out of 5 stars from me.
Posted by Nick Cardillo at 3:46 AM