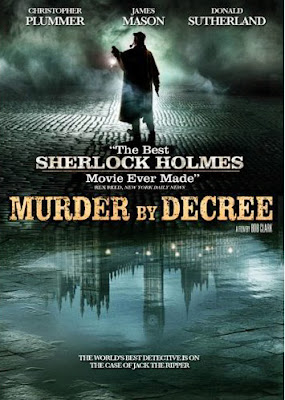 There was something about the 1970's for fans of Sherlock Holmes. Not only was Nicholas Meyer's pastiche, "The Seven-Per-Cent Solution" initially published, but that decade saw the release of Billy Wilder's "The Private Life of Sherlock Holmes," an adaptation of Meyer's novel, and "Murder by Decree," one of the finest Sherlock Holmes movies ever made. Today, I submit to you an analysis of this fine film, submitting it as a Portrait of Perfection.

"Murder by Decree" wasn't the first Sherlock Holmes vs. Jack the Ripper films to ever hit cinema screens. Thirteen years earlier in 1965, John Neville starred as the great detective in "A Study in Terror." Today, the film is regarded as being something of a campy curiosity. Released during the very successful run of "Batman" on American television, posters for "A Study in Terror" promoted the film as featuring "the original caped crusader." Things certainly changed by the time that "Murder by Decree" rolled around. It features a far darker plot, draws off of real events and characters and features one of the finest portrayals, yet one of the most controversial,portrayals of Sherlock Holmes.

Much like "The Private Life of Sherlock Holmes" and "The Seven-Per-Cent Solution" there is something very different about this version of Sherlock Holmes. Christopher Plummer's Holmes is a kindhearted, very sincere man, at odds with the cold, calculating genius portrayed in Arthur Conan Doyle's originals. That doesn't mean that this Holmes is any less brilliant than his literary counterpart. Holmes still manages to unravel a tangled skein of events surrounding the Ripper murders, but he feels far more empathy towards all those involved. Whereas Holmes said in "The Sign of Four": "A client is to me a mere unit, a factor in a problem," this Holmes is more trusting and sincere.

The choice to play the character this way was Christopher Plummer's, and he does a fantastic job as the detective. Plummer truly elevates the detective from the screen and makes him seem like a well-rounded individual. This Sherlock Holmes is obviously a man who enjoys his work, but even he is not unaffected by the brutalities of the Ripper killings, and come the movie's end, one wonders how normalcy will return to Baker Street for Holmes and Watson. Speaking of Watson, James Mason gives a stellar performance as the good doctor, and truly one of the finest ever committed to screen. This Watson is a competent medical man, witty and good under pressure. In short, Mason is one of the closest representations of Arthur Conan Doyle's original doctor. The rest of the cast is equally brilliant. "Murder by Decree" has perhaps the finest cast of any Sherlock Holmes films including: Susan Clark, Frank Finlay, Donald Sutherland, Genevieve Bujold and John Gielgud.

"Murder by Decree" is also notable for the fact that it portrays the Jack the Ripper realistically and with real characters. The harsh living conditions which were the norm in London's impoverished Whitechapel district are brilliantly recreated here. Add to that enough fog to swallow up two pictures, and "Murder by Decree" is positively dripping with atmosphere. The film's plot, centred around the so-called 'Royal Conspiracy' makes for engaging viewing, even if the theory has been more or less discounted by most Ripper historians.

So what about you? Have you seen "Murder by Decree?" Is your opinion of this movie as high as my own? Or does the dark subject matter and atypical portrayal of Sherlock Holmes turn you off? Feel free to leave a comment below.
Posted by Nick Cardillo at 3:49 AM