Lost Without my Boswell 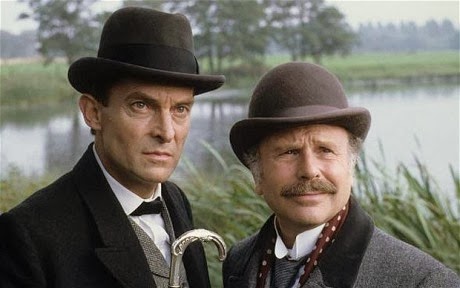 Sherlock Holmes is probably the character we enjoy so much. We read the canon to read Holmes' brilliant deductions as he unravels baffling mysteries. Yet, Sherlock Holmes is only a part of a pair - a pair of the greatest literary creations of all time, and the pairing of Sherlock Holmes and Dr. John Watson certainly changed the mystery genre forever.

Sadly, Dr. Watson is overlooked nowadays. The narrator of almost all the canon stories is often left behind in all forms of media. Today, I want to right that wrong by taking a look at Dr. Watson and how he is just as important to the canon as the world's greatest detective. To start, I thought it would be best to examine Watson's role as story's narrator. Aside from four short stories, Dr. Watson is the main narrator of the original canon. His role as an observer and analyzer in part makes him what Holmes is. Both men keenly analyze a situation - in the detective's case it's a crime and in Watson's its the actions of his friend.

I will be blunt when I say that the stories in the canon which are not narrated by Watson fall rather flat. "The Mazarin Stone," which is narrated in the third-person has developed something of a reputation as one of the weakest short stories. "His Last Bow," again told in the third-person is slightly better. However, the stories which are told from Sherlock Holmes' own point of view are certainly curiosity of the canon and I don't think they rank highly on most people's list of favourite Sherlock Holmes stories.

What is best about Watson's narration is that he actually plays a part in the stories as well. The detective's assistant acting as storyteller certainly goes back to Edgar Allan Poe's "The Murders in the Rue Morgue." However, Poe's unnamed narrator really doesn't function as much of a character. Even detectives who emerged in Holmes and Watson's wake didn't pay a great deal of attention to the narrator. Case in point - the Philo Vance novels of S.S. Van Dine are in fact narrated by Van Dine. Yet, he does nothing to drive the plot forward. He is merely there to write about Vance's incredible deductive feats. Watson on the other hand has a history, friends, acquaintances and is far more well-rounded.

Dr. Watson has sadly gotten a bad rap in most forms of media. Of course, Watson is not as smart as Holmes, but he is by no means an idiot. Watson is a competent medical man and a soldier. So where does the notion of a dim-witted Watson come from? The suspect who gets the finger of guilt pointed at the most is Nigel Bruce, who co-starred opposite Basil Rathbone throughout his fourteen film run. To be truthful, Bruce's comedic Watson is pretty far removed from Doyle's original. But, I like Bruce's Watson (so what if that's heresy), so it's time to defend this version of the good doctor.

Nigel Bruce is a skilled comedian, and he runs the gambit from physical comedy to deadpan delivery. Both 20th Century Fox and Universal put Bruce's excellent comedic skills to good use, and wrote the part of Dr. Watson accordingly. In retrospect, it makes sense. Despite the fact that Doyle's Watson is a well-rounded individual, he can at times be relegated to the sidelines as he acts as a story's observer, which is pretty difficult to represent on screen. At least, Nigel Bruce's Watson had something to do, even if it was making something of a fool of himself. What's more, Nigel Bruce's Watson was not the first time the doctor had been portrayed as a comic foil. H. Reeves Smith who appeared as Watson in 1929's "The Return of Sherlock Holmes" (the first talkie Sherlock Holmes film) played the part for laughs and Ian Fleming who starred opposite Arthur Wontner wasn't exactly the sharpest knife in the drawer.

Lately, Watson has gotten a much-needed re-evaluation. The two current Watsons in media - Martin Freeman and Lucy Lui - have taken the part to new highs. Freeman's Watson is one of the best since Edward Hardwicke in the Granada series with Jeremy Brett. Freeman manages to capture the character's intelligence while enthusing the part with a striking humaneness. Bravo to Martin Freeman, Mark Gatiss and Steven Moffat. Lucy Lui's Watson has improved greatly since her initial appearance in "Elementary," and has lately been taking centre-stage, even eclipsing Johnny Lee Miller's Holmes in terms of deductive reasoning. The real question is - does this push the envelope a bit too much? 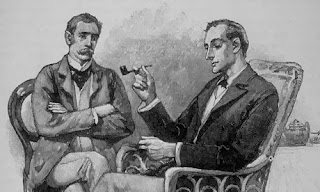 Dr. Watson is just as important a character as Sherlock Holmes. The good doctor revolutionized how mystery stories are told. The Queen of Crime Agatha Christie certainly took a page from Doyle's book in crafting her character of Captain Arthur Hastings, who is in essence Hercule Poirot's own Watson. Hastings is obviously a Watson homage as both men are military men caught up in the work of their detective associates. One wonders if the detectives who came after Holmes would have flown solo if it weren't for Watson. Sherlock Holmes himself said in "A Scandal in Bohemia" that he would be lost without his Boswell - his only friend, colleague and biographer. Dr. Watson gave us humane insight into the inner-workings of Sherlock Holmes' brilliant cognitive skills. It is true - every Holmes needs his Watson.
Posted by Nick Cardillo at 3:53 AM