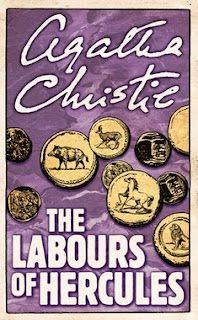 "The Labours of Hercules" was an unusual choice for the penultimate episode of "Agatha Christie's Poirot." The book, which is really a collection of short stories, would have made for much better adapting in the late '80's, when the show was still adapting Agatha Christie's short stories to the screen. But, as I saw with "The Big Four," the production team behind the show can make unusual stories work well. Did they manage to do it again?

Hercule Poirot (David Suchet) is on the trail of the thief, Marrascaud. The cunning criminal has evaded capture before, but the Belgian detective is sure he can snare him. But everything go awry and a young girl ends up murdered. Poirot contemplates retirement, that is until he's enticed into a case by his chauffeur. It seems that the young man's sweetheart has disappeared to a villa in the Swiss alps with her employer. Poirot heads for the hotel where she is believed to be staying and soon discovers that not only is Marrascaud rumoured to be at the hotel, but soon there's a murder...

I do apologise if the synopsis for "The Labours of Hercules" is a bit vague, but I honestly had very little idea what I was watching. While "Dead Man's Folly," the show's previous entry was a great success, this episode was dire indeed. I have sadly never read Christie's collection of short stories (it sits on my shelf so hopefully I won't neglect it for long), so I cannot say which elements of her book made it into the adaptation. If there were any, it seems like they were thrown together without much thought as to whether it would move the plot forward. Much of the first half was occupied by characters sitting and talking to each other, about topics which couldn't possibly have any bearing on the plot. It was not until the episode's half-way mark did anything befitting the mystery genre occur.

It is a real pity that this story would end up being the penultimate episode to the entire series' run. It was very disappointing, especially since it had such great talent behind it. David Suchet handled Poirot brilliantly. Though the detective is supposed to be depressed in the story's beginning, as a result of his failure to capture Marrascaud, Suchet restrained his performance wonderfully. One only needs to look at the equally upsetting adaptation of "Murder on the Orient Express" to see that Poirot is quite capable of hamming it up. While we;re talking about positives, visually the episode was great. The interiors and exteriors of the hotel and the alps were beautiful.