Sleuthathon - "A Study in Terror" 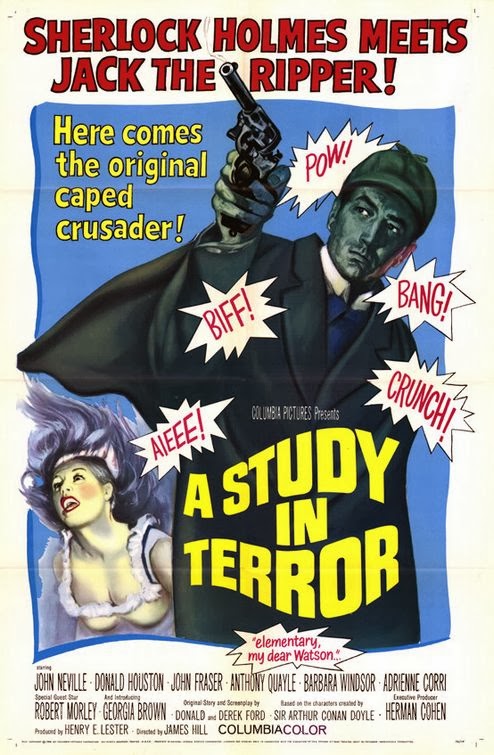 Most Sherlockian cinema is a reflection of the era in which a movie was made. Yet, of all the Sherlock Holmes major motion pictures released thus far one is more firmly rooted than any other. That film is 1965's A Study in Terror, the first movie to pit the world's greatest detective against Jack the Ripper.

Today's review I submit as part of the Sleuthathon blogathon sponsored by Movies Silently.com.

A Study in Terror finds London's East End slum of Whitechapel terrorised by a brutal killer who is claiming young unfortunate women as his victims. Aware of the horrors being perpetrated, Sherlock Holmes (John Neville) is enticed into the case when a surgeon's medical bag arrives at 221B Baker Street - conspicuously missing a surgeon's postmortem knife. When it transpires that the bag belongs to the son of aristocracy, Holmes and Watson (Donald Houston) begin on a dark journey from the upper-crust to Whitechapel and will soon come face to face with Jack the Ripper himself!

What one must remember when watching A Study in Terror is that it can be enjoyed so much more if the viewer is willing to be entertained. History buffs be aware as the film does not accurately portray the Ripper murders. In fact, if anything Jack the Ripper is used as a thematic plot device - as is Sherlock Holmes. That's not to say that their presentation is wrong - in fact the persona of the great detective is excellently depicted. But, if one comes out of this movie thinking that Annie Chapman, the Ripper's secret victim, was a young blonde-haired woman, than they have been severely duped. 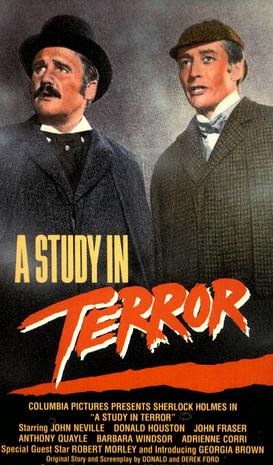 Made in the mid-1960's, this film certainly betrays that fact. A Study in Terror can be described in one word: camp. Filmed at the height of Batman's popularity in the United States starring Adam "Shark Repellent Bat Spray" West and Burt "Holy [insert noun here] Batman" Ward, A Study in Terror is greatly influenced. In fact, movie posters dubbed the great detective as "Here Comes the Original Caped Crusader!" Holmes becomes a gung-ho adventurer, who in an excellent bit fends off a group of thugs using a sword cane, and come the firey climax, Holmes isn't afraid to throw a few punches. The movie reinforces its '60's roots in its horror scenes, particularly the depictions of the Ripper killings. Each one is brutal and rather intense, but quick and show very little blood, obviously in the style of Alfred Hitchcock's Psycho which predated this film by five years.

For a Sherlockian scholar, like myself, the main attraction in this film is John Neville's Sherlock Holmes. Neville had previously been approached for the role of the detective in the musical Baker Street, and he was later under consideration after Douglas Wilmer bowed out as the detective in Sir Arthur Conan Doyle's Sherlock Holmes (the part eventually went to Peter Cushing). Whether he's conducting an excellent set of deductions or racing after the Ripper through the Whitechapel morgue, Neville accurately portrays all facets of the great detective. He is a pretty stiff, upper-crust detective, and there's a nice bit of comedy when he and Watson enter a seedy pub dressed in their best evening wear. To back up Neville's Holmes is Donald Houston's Watson, who provides a bit of comic relief in this rather dark film. The other reason for Sherlockians who may not have seen this movie is for Robert Morley's performance as Mycroft Holmes. Morley's Mycroft was the first time the detective's brother was portrayed on screen, and the resemblance between the actor and Sidney Paget's illustration is uncanny. 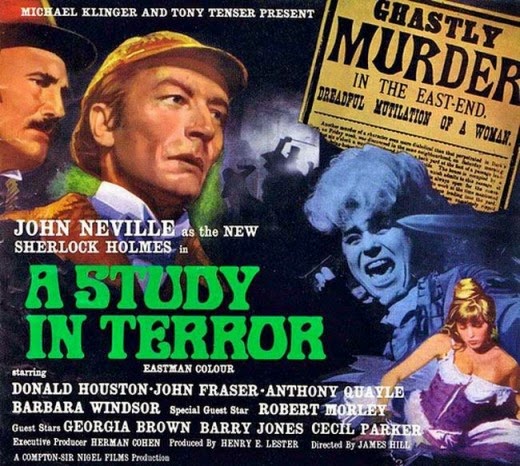 There are also a few other notable cast members: Frank Finlay plays a suitably rat-faced Inspector Lestrade and Anthony Quayle turns up as the reddest red herring as a soup kitchen owner/medico. Interestingly both actors would turn up in 1979's Murder by Decree, the second Sherlock Holmes vs. Jack the Ripper film. Finlay played the same role in the latter film. A Study in Terror also marked one of the earliest film roles of legendary actress Judi Dench, who recommended for her role by star John Neville after the two had worked in theatre.

Following the film's release in 1965, the story was novelised by Ellery Queen, the nome-de-plume of mystery-writing cousins Frederic Dannay and Manfred Bennington Lee. Queen was also the name of their detective hero. Changing a great deal of the movie's plot, the novelisation found Queen retrieving a manuscript which depicted the events seen in the film. This retelling changed a number of plot points seen in A Study in Terror - most notably the identity of Jack the Ripper!

A Study in Terror is today a relatively obscure Sherlockian effort. If its viewer than get over the overt campiness of the whole thing, A Study in Terror will fit the bill for Sherlockian fare. I therefore give this enjoyable venture 4 out of 5 stars.
Posted by Nick Cardillo at 9:47 AM