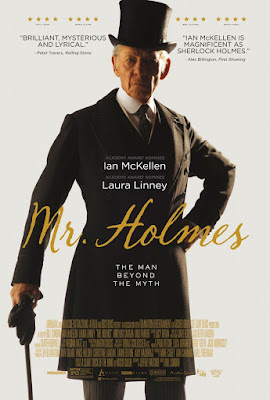 As I have remarked on this blog before, Sherlock Holmes' retirement has been a point of interest for Sherlockians everywhere. Arguably the most famous instance of Holmes in retirement in fiction is Mitch Cullin's A Slight Trick of the Mind which found the detective on the verge of being a centenarian struggling to recall the details of his remarkable life. To be perfectly frank I was not quite sure what to expect when I learned that the novel was being adapted to the screen. I had never read the book but its mixed reputation in the Sherlockian community has lead to some skepticism on my part. All-the-same, the time finally came when I had to see the film which eventually became known as Mr. Holmes and featured Academy Award nominated actor Ian McKellen as the great detective.

The year is 1947. Sherlock Holmes (Ian McKellen) has just returned to his seaside Sussex cottage after a trip to Japan in the hope of procuring prickly ash, a homeopathic remedy for memory loss. The elderly Holmes is cared for by his housekeeper Mrs. Munro (Laura Linney) and her son Roger (Milo Parker) who takes an interest in the career of the great detective. As Roger's relationship with Holmes deepens, the boy manages to convince Holmes to continue searching for the truth regarding his final case. Holmes recalls that he successfully solved the mystery but cannot remember the outcome. The mystery involved a husband who feared for his wife who has begun to act strangely. As Holmes nears the truth it appears as though Holmes has finally been confronted with a case he cannot solve...

Mr. Holmes is a Sherlock Holmes which is quite different than most. While it is not an entirely original concept to feature the detective as the central figure of a character study - such as The Private Life of Sherlock Holmes or The Seven-Per-Cent Solution - past films dealt more heavily with the detective's work as a detective. As the posters for the film boldly declared, the film would instead be about "the man beyond the legend." Mr. Holmes goes to lengths to peel away the surface aspects of the character by having Holmes say that he does wear deerstalker hats, is not fond of pipes, and did not even reside at 221B! In doing so, Mr. Holmes may very well be the most in-depth look at Sherlock Holmes that we have ever seen.

The major difference between this film and others in the Sherlockian sub-genre is that it finds Holmes struggling - not with the case at hand but with himself. While this was explored in The Seven-Per-Cent Solution, the Holmes of Mr. Holmes is battling the aging process itself as he struggles to remember the details of his final case and learn why he was so insistent on exiling himself to Sussex to keep bees. For a die-hard Sherlock Holmes fan it is incredibly unconventional and - to be perfectly honest - rather difficult to watch my favorite heroic figure struggle against unbeatable forces.

To play this most unconventional portrayal of Sherlock Holmes is Ian McKellen whose filmography, though I am loath to admit it, I am not as familiar with as I should be. Simply put though, McKellen is excellent as both the elderly Holmes and the more youthful detective during the numerous flashbacks which depict Holmes' final case.  He conveys all aspects of the detective's character very nicely which range from his coldness and intellect to wry humor and eventual self-realization. By all accounts, the part of Sherlock Holmes is not an easy one to play and with the script's added challenges, I can imagine that it was something of a trial for McKellen but he rises to the occasion brilliantly.

The rest of the cast compliment McKellen very nicely. Laura Linney brings incredible realism to her role as Holmes' skeptical housekeeper Mrs. Munro and, as the film progresses, she shows that she has some fine acting chops. The same goes for the young Milo Parker as Roger whose friendship with Holmes drives much of the story forward. The old man and young boy's friendship also feels very real and is wonderfully acted by both parties. Fans of Sherlockian cinema will also want to keep an eye out for Nicholas Rowe star of 1985's Young Sherlock Holmes who plays an actor playing the great detective in a film.

The whole production of Mr. Holmes is top notch. The costume design and cinematography are excellent - the beautiful English coastline is wonderfully realized on film. Direction from Bill Condon is fine too. This was Condon's second association with McKellen the two have previously worked on Gods and Monsters the story of Frankenstein director James Whale. In all, Mr. Holmes overcomes its unconventional points with its brilliant acting and stunning production values. Mr. Holmes truly is a Sherlock Holmes film like no other and I award it four very deserved stars out of five.
Posted by Nick Cardillo at 10:09 AM 7 comments: