Doctor Who Season 7 So Far Part I

March 30, marks the return of "Doctor Who." Needless to say, I am excited so over the next few weeks, we'll take a look back at the first five episodes which has comprised the show's seventh season. And today, we begin with Steven Moffatt's "Asylum of the Daleks." 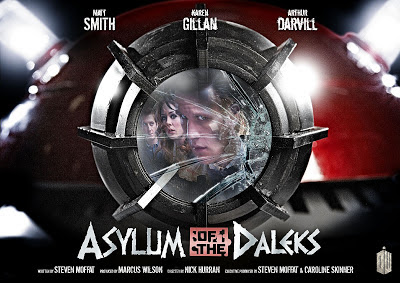 The Daleks have forever been the Doctor's arch-enemy. Traveling throughout time and space, the Doctor and his companions have faced the Dalek threat as they worked in vein to conquer the universe and "exterminate" all in their path. So it comes as a great surprise to the Doctor when he is summoned to the Dalek's home planet, Skaro. This rendezvous turns out to be a trap and he ends up kidnapped alone with his companions Amy Pond (Karen Gillan) and her husband Rory(Arthur Darvill).

Taken to the Dalek's high council, the Doctor learns that his most hated enemy actually need his help. On another planet known as the Dalek Asylum, the most feared Daleks in the universe have potential to break free. It is up to the Doctor, Amy and Rory to arrive on the planet and reinstate the force-field which surrounds the planet. It is a terrifying and truly harrowing experience for the trio.

"Asylum of the Daleks" opens the season in grand style. It features some show-stopping moments and brilliant direction. I think what I liked best about this episode was the Daleks. They were actually quite terrifying. A problem which the show encountered during its first four seasons was that it used the Daleks too often. They turned up in three of the four season finales and of course in between. Moffatt has used the Daleks sparingly, and their return in this episode was great. In addition, the voice work done by Nicholas Briggs was great, and he was able to turn these creatures which seemingly have no emotions into almost sympathetic beings. Bravo Mr. Briggs!

What was also interesting was how Steven Moffatt deftly introduced Jenna-Louise Coleman as Oswin, who would later return as Clara in "The Snowmen" which serves as Season 7's Christmas Special. I had no idea that she appeared in this episode, and the revelation which comes at the end of the episode was stunning. If Jenna-Louise Coleman acts like she did in this episode and in the Christmas special, she has potential of being one of the greatest companions the Doctor has ever had.

I know that some fans were disappointed by the fact that this episode promised every Dalek from the show's history, but let's honestly think about this. Is that even possible? We do indeed catch glimpses of many of the older Daleks, but this I suppose was not enough for some fans. I do not want to sound like an angry troll of the Internet, but I do think that people do have to put things into perspective with this episode. The acting was wonderful and the atmosphere of horror which permeated the Dalek asylum was genuinely creepy. This was honestly a wonderful story which set Season 7 up to be fantastic. I award Steven Moffatt's "Asylum of the Daleks" 4 out of 5 stars. Bravo to all involved!

Next Time: "Dinosaurs on a Spaceship!" Enough said.
Posted by Nick Cardillo at 2:47 PM