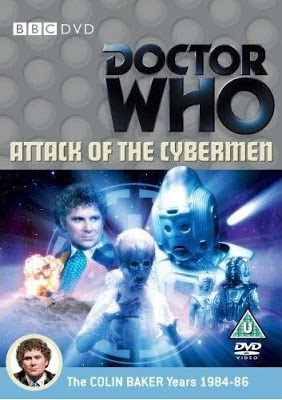 A group of gangsters are plotting to steal thousands in diamonds from the Bank of England. The group will enter through the sewer system which runs underneath the bank. However, they are unaware that only a few days earlier two workmen were brutally murdered by a strange creature in the very same sewer system. All the while, the TARDIS has arrived in London and the Doctor (Colin Baker) and Peri (Nicola Bryant) soon find themselves in a quandary when their confronted by the Cybermen.

"Attack of the Cybermen" can be viewed in some respects as Colin Baker's first true "Doctor Who" serial. Though he had starred in "The Twin Dilemma," that serial was tacked on at the end of Peter Davison's last season. "Attack of the Cybermen" was a brand new season - and an entirely new format. The show was now be broadcast over the course of two consecutive Saturdays and had a new running time of 45 minutes. To anyone who was familiar with the routine of the show, this change could be quite jarring, but I had started "Doctor Who" with the newer seasons, which also are broadcast in 45 minute long episodes.

With the beginning of a new season, it seems as though Colin Baker has mellowed out a little. He is still the rather conceited, pompous Doctor of before, but he has found himself a good balance between pompous prig and humane Doctor. It also helps that he is not introduced in this episode trying to strangle Peri. Colin Baker continues to grow on me. I liked him from the outset, however he continues to redefine himself and I find that I do not have the same view on him as other fans of the series do. That same statement can be applied to the writing of the show. While some fans say that the quality of the show's writing decreased dramatically at this juncture, "Attack of the Cybermen" is a well-plotted serial. It may begin with too many plot devices for itself to handle, but they are all tied up nicely in the end.

This story also introduces a quite surprising change which occurs in the series' run. Season 22 of the Classic Series ("Attack of the Cybermen" attacked as the Season 22 opener) is incredibly dark."Attack of the Cybermen" is one of the more violent stories from the Classic Series, and this dark trend will weave itself into upcoming stories in the series ("Vengeance on Varos" and "Revelation of the Daleks" especially). There were complaints at the time of the story's airing that the story was too violent, however this dark atmosphere do add to the overall villainous quality of the Cybermen.

My complaints about "Attack of the Cybermen" are few. For the most part, it is the fact that the Doctor's involvement in the story is minimal as the story begins. In my mind when you have a character as great as the Doctor that he should be utilized throughout the story. I know that the first portion of the story has to set up all of the plot points which will come into play as the story progresses, but it seems as though the story is always shifting away from the Doctor and focusing on other characters instead. Nevertheless, this is more of a nitpick than a real compliant. Surely, "Attack of the Cybermen" is a flawed story, but surely not a terrible one and is enjoyable in the extreme.

My thoughts about "Attack of the Cybermen" are essentially outlined in the above sentence. Colin Baker again turns out a good performance. He has mellowed out a bit so the Doctor is now a bit more identifiable Overall, it's an enjoyable story and a highly recommended one for Classic Who fans.

Coming Next Time: The Doctor will enter the Punishment Dome and face a series of unspeakable trials in "Vengeance on Varos."
Posted by Nick Cardillo at 6:27 AM