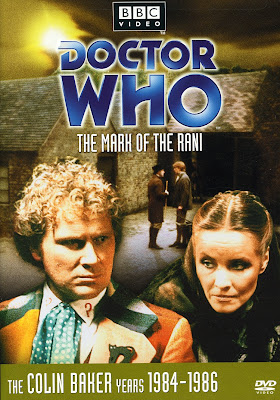 The Doctor (Colin Baker) has a problem on his hands. Arriving in a small mining community in the days prior to the Industrial Revolution, he finds himself facing two deadly enemies - the Master (Anthony Ainley) and the Rani (Kate O'Mara). When a number of Luddites begin to act strangely, the Doctor suspects a connection. But what are the renegade Time Lord's up to - and how will their plan affect the very human race.

I will be perfectly frank from the outset, "Mark of the Rani" is a mediocre episode. It is not good - but it is certainly not bad. It just seems to be a routine serial which is rather lacking in true excitement, but does hold in store some surprises. So, I suppose that I ought to begin by looking at the positives.

As usual, Colin Baker has turned in a good performance. By now, the Doctor has become quite humane and caring. It is somewhat sad to see the prickly edge gone from the Sixth Doctor, but I do understand that a story ark had been implemented and slowly but surely the viewer would come to love the newest incarnation of the Doctor. Also, Nicola Bryant continues to become a more enjoyable companion. Opinion rage about Peri as a companion considering she wasn't exactly the sharpest knife in the drawer and acting as a blundering, bumbling companion. However, here Peri is a given a chance to act a bit more intellectual and seems to have more purpose than just being the Doctor's companion.

In addition, "Mark of the Rani" provides another opportunity for audiences to see the Master (played here by Anthony Ainley). To those unfamiliar with the show, the Master can be summed as being the Doctor's arch-enemy (or perhaps the Doctor's very own Professor Moriarty?). Ainley was the forth actor to take on the role of the Master, a character who debuted during the tenure of the Third Doctor. Ainley is the longest-running actor to take on the role appearing with the Fourth, Fifth, Sixth and Seventh Doctors. In this particular episode, the Master truly exudes a menacing persona, and in some scenes he is genuinely creepy. It was also nice to see all of the characters running around in the early 1800's, since the historical settings add an interesting flare to the show. "Mark of the Rani" was filmed on location at an authentic recreation of a small 1800's mining town.

Now then, as to the Rani...she is, well okay. I never got the impression that she was much of a threat to the Doctor. In all of her scenes with the Master all she does is bicker and fight. In an alternate universe, could this have been the start of a comedy spin-off - "The Odd Couple: Time Lord Addition?" There are also times when all of the characters talk to themselves for no readily apparent reason whatsoever. These inexplicable things make up the serial's problems. The script just ins't that good. I know that the story is set around the time of the luddite rebellion, but really how many times in one episode can you repeat the  word 'luddite.' It is not that common of a word. If you're unaware of the word's definition, it is a person who is violently opposed to technology or social change. So, I suppose that the allegations that the show suffered script problems is rather true.

So, what is one bad mark against a tenure which has been until now rather free from fault. Sure, nothing is perfect, but "Mark of the Rani" does slip in the show's quality. But, what if that one bad mark suddenly became two...?

Coming Next Time: "The Two Doctors"
Posted by Nick Cardillo at 8:23 AM