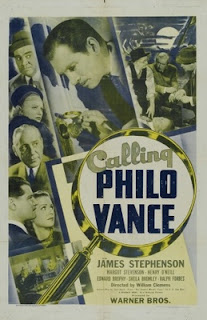 The final movie on Warner Bos.' DVD, "The Philo Vance Murder Case Collection" is actually a remake. 1940's, "Calling Philo Vance" is an updated version of the 1933 film, "The Kennel Murder Case." Retaining the same plot, the movie throws in a bit of espionage and Nazi sympathizing to thoroughly bring Philo Vance into the modern world.

S.S. Van Dine's final Philo Vance novel, "The Winter Murder Case" was published only one year prior to the release of this movie. Van Dine died that same year. By looking at the Philo Vance character and the movies made thus far, it is pretty easy to understand why Warner Bros. decided to implement a few changes when it came to the central character. Vance, as played by James Stephenson in this film, is no longer a haughty, upper-crust, pompous twit, he's actually a rather likable fellow.

When the film was released, 20th Century Fox had just dropped the Sherlock Holmes series featuring Basil Rathbone and Nigel Bruce as well as the Mr. Moto series with Peter Lorre. The detective whose name still graced screens at the time was Charlie Chan, played by Sidney Toler who brought a warmness to the character, with a bit of acid wit. Vance would be redefined like this. No audience in 1940, the beginning of a war overseas, would want to rally around a self-proclaimed know-it-all who could quote literature better than Lord Peter Wimsey. Especially so if this detective would be working on the country's behalf.

"Calling Philo Vance" opens in Vienna where Vance (James Stephenson) is working undercover. He has been tipped off that American airplane designer, Archer Coe is selling plans for a bomber to the Nazis. In an effort effort to recover the plans, Vance is caught and sentenced to months of hard labour aboard a ship. When it docks in New York, he escapes and becomes embroiled in mystery once again when Archer Coe is discovered brutally murdered.

There isn't much to say about "Calling Philo Vance" in plot terms that I have not said for "The Kennel Murder Case." The two stories are exactly the same, aside from the Nazi business in the beginning. It is a well-made movie, obviously a B-movie from the time. By watching it I don't think you'll witness anything extraordinary. However, James Stephenson is one fine Philo Vance. I'd say he's the best actor since Warren William in "The Dragon Murder Case" to have taken on the part. Despite not betraying the condescending attitude of William or Powell, James Stephenson does make Philo Vance a worthy adversary and he is familiar with high society. It also helps that this Philo Vance can even throw a few punches - quite far from the character of S.S. Van Dine's novels, but helpful in broadening the character. 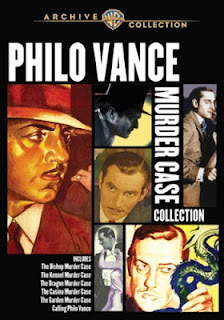 Also on hand to perform are character actors such as Ralph Forbes and Martin Kosleck. Kosleck is a familiar face to fans of '30's and '40's cinema, especially to those familiar with Universal Horror films. Kosleck's performance here is a minimal one, but within a few years he'd make a name for himself in the horror and mystery genre.

"Calling Philo Vance" is a fine film for this collection to end on. Since its release, I have praised Warner Bros. and the Archive Collection for finally putting these fine films on DVD and I have also bought another film collection in the Archive Collection. To any fans of the mystery genre, these classics come highly recommended from me. Officially, I give "Calling Philo Vance" 3.5 out of 5 stars.

All of these movies are real classics for the film buff or the mystery enthusiast to enjoy!
Posted by Nick Cardillo at 5:51 AM