The Mystery of the Vanishing Detective 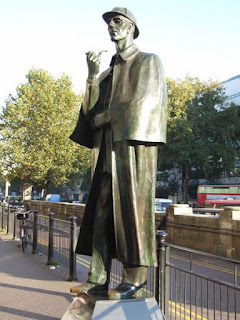 For a blog whose main focus for so long was Sherlock Holmes, and to this day, still is, it is perhaps unusual that I have covered the detective so little in the past few weeks. Part of the reason is I got bogged down with reviews concerning the second half of Doctor Who Season 7, but there's another reason entirely.

It has been my observation for a little while now that Sherlock Holmes is not as popular as he once was. For any fan of the great detective, 2009 was a ball. In that year "Sherlock Holmes" debuted with Robert Downey Jr. as the hero and the first season of "Sherlock" was airing at the same time. I remember fondly my local bookstores promoting Sherlock Holmes everywhere. It was very exciting and for a while this streak seemed to continue going. However now, I'm left in something of a dry spell. I'm sure there are still plenty of pastiches out there I haven't read, but the pastiches I have seen do not really look like they'll manage to hold my interest. There are a few I have to get around to reading, but others I believe that I can forego.

I can only hope that in the future, I will find some more Sherlock Holmes-related items to review on this blog. This summer, when hopefully I've got a bit more time on my hands, I can get back to watching some Sherlock Holmes movies. With any luck, I can review them here. That way, I can formally give my opinions of such classics as "The Private Life of Sherlock Holmes," "The Seven-Per-Cent Solution" and "Murder by Decree." On the pastiche front, there are a few stories from MX Publishing, a London-based publisher who has continued to turn out a number of Sherlock Holmes pastiches. Just about all of their books are available in print form or on Kindle. Some titles have caught my eye in the past, but I have never read any of them. 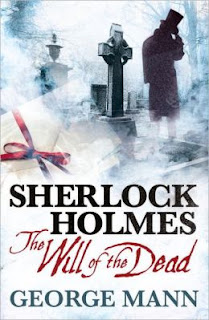 In addition, Titan Books, who has continued their "Further Adventures of Sherlock Holmes" series. After going on a hiatus since the fall, the series will continue with two books previously un-published books. The first of which, "Sherlock Holmes and the Stuff of Nightmares" is being written by steampunk novelist, James Lovegrove. The story will feature a series of mysterious bombings, Spring-Heeled Jack and even Professor Moriarty. In addition, released in November will be "Sherlock Holmes and the Will of the Dead" written by George Mann. Mann was the author behind the Big Finish audio production, "The Reification of Hans Gerber" and judging from the summary on Amazon.com, the stories are the same.

I am looking forward to reading the story considering that "The Reification of Hans Gerber" was a very plot-driven story and relied heavily upon Richard Earl's narration as Dr. Watson. As much as I am interested in reading the novel, I do hope that Mann hasn't simply hit "cut and paste" on his keyboard when writing this story. It would be nice to see the story perhaps have some new plot elements woven into the book, and extrapolated upon other elements perhaps in order to make the plot feel a bit more like an old-fashioned mystery.

All in all, it looks like I may have some Sherlock-related fun coming sooner than I think. It will be nice to see the detective again. The Consulting Detective has been lacking its main feature for long enough.
Posted by Nick Cardillo at 8:38 AM