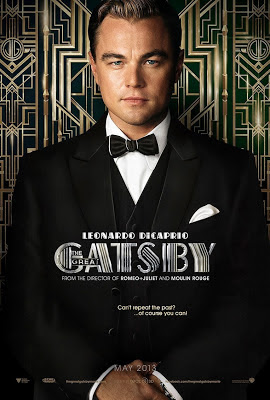 I know what you must be thinking. First I say that this blog will be devoted to Sherlock Holmes. Then, I say I'll throw in some Doctor Who. Then, I go for the entire mystery genre - and now I'm reviewing something hardly related to the genre in any way. Don't worry, this is a one time thing.

Since "The Great Gatsby's" release in late May, the movie has received a number of mixed reviews. Some have loved it. Others hated it. I finally got around to seeing the movie and luckily my memories of the book still linger in my mind, since I read it for the first time only a few months ago. For anyone who doesn't know, "Gatsby" tells the story of millionaire Jay Gatsby (Leonardo DiCaprio) as he tries to rekindle his love with Daisy Buchanan (Carey Mulligan).

The tragic story of love and loss was written by F. Scott Fitzgerald in 1925, and since then has become a beloved classic. Officially, Fitzgerald's book has only been adapted twice for the screen, once in 1974 with Robert Redford as Gatsby and once in 2000 with Toby Stephens as the millionaire. At the time of this writing, I have yet to see the other two adaptations so I cannot say how this newest one stands up to the others. 2013's "The Great Gatsby" was directed by Baz Luhrman, the director behind 2001's "Moulin Rogue." If there was a director who could be picked to bring the 1920's to life in a new, innovative way, Luhrman was the man.

I'll be up front with you all - I thought that "The Great Gatsby" was fantastic. The performances, cinematography, costumes and set design were all splendid. What surprised me most however was DiCaprio. I have never been a big fan of Leonardo DiCaprio. He was always in my mind something of a mediocre actor - he's not bad (watch "Catch Me If You Can"), but not perfect. However, here he knocked my socks off as Gatsby. Though he was not the ideal representation for Gatsby in my mind, he stole the show in the film. His introduction in the movie was handled brilliantly with the music swelling and fireworks blasting in the background. It was a brilliantly executed scene, and in that moment I was positive that there was no one else suited for the role of Jay Gatsby.

Toby Maguire was also very good as Nick Carroway, the book's narrator. In my mind, Nick has always been a fish-out-of-water character and I feel as though he pulled off the part brilliantly, conveying a wide range of emotions in the span of the film's running time. Carey Mulligan was good as Daisy, though her performance was perhaps overshadowed by both DiCaprio and Maguire as well as Joel Edgerton, who plays her husband Tom. Joel delivered a fine performance as the antagonistic Tom and he was a true screen presence. 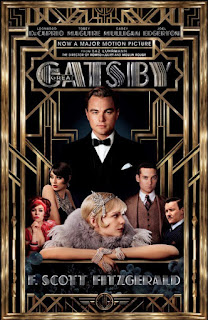 Performances aside, the movie looked great. The recreation of 1920's New York was stylishly represented and despite a modern twist on the era, there were still some great throwbacks such as posters for Douglas Fairbanks' "Robin Hood" and advertisements for men's pointed collars. Gatsby's parties were created in wonderfully over-the-top fashion, and although I pictured nothing so grandiose in my mind when reading the book, it seemed to work perfectly. The same can be said for the modern musical score, which consisted mainly of rap and hip-hop music. At first, the idea of rap music in a movie set in the '20's seemed so wrong, but again it managed to work well here. It's almost inexplicable as to why - it just did.

While I loved "The Great Gatsby" it was not perfect. Some of the book's well-masked symbolism is exploited too greatly in the book. During the film, it is made sure that the viewer comprehends the symbolism. This detracted me from the movie some, as did the dumbing  down of some symbolism. A green light is used throughout the story to symbolize hope and during the actual book, the green light is never explained. Here, the light is explained away at once, and it takes away from some of the mystery of this plot element. I would have preferred if these elements weren't changed so dramatically or dwelled upon too much.

I went into "The Great Gatsby" hearing a number of varied opinions - I left the theater in awe. I thought that the movie was wonderfully done. This is certainly the best adaptation of F. Scott Fitzgerald's novel so far, and can be enjoyed equally by those who not read the book. I heartily recommend "The Great Gatsby" and I award it 4 out of 5 stars.
Posted by Nick Cardillo at 5:10 AM