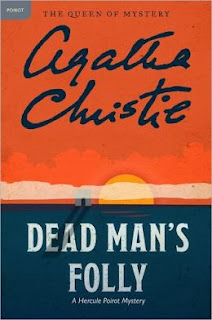 "Agatha Christie's Poirot" continues with "Dead Man's Folly," which is one of Christie's later, though still extremely clever novels. It is rather bleak in tone which suits the series excellently. "Dead Man's Folly" is the third to last episode of the series and the last to feature mystery writer Ariadne Oliver.

Mrs. Ariadne Oliver (Zoe Wanamaker) has been invited to Nasse House in Devon by its owner Sir George Stubbs (Sean Pertwee). Sir George and his wife Hattie bought the house from the Folliat family and there is some tension and animosity between the two families. A village fete is being held on the grounds of the mansion and Mrs. Oliver is in attendance to stage a 'murder hunt.' As she explains it, it's rather like a treasure hunt only a murder must be solved. Only, it's not a real murder - that is until the victim turns up quite dead. Mrs. Oliver only has one person she can turn to - Hercule Poirot (David Suchet).

I will be honest and say that I had never read Agatha Christie's "Dead Man's Folly." I was however familiar with the story having seen the 1980's television adaptation featuring Peter Ustinov as Poirot. Unsurprisingly, this version of Christie's story was more entertaining and as I gather much closer to the plot of the book. It is certainly one of Christie's most interesting plots, at times bordering on the fantastical, but staying within the realms of the believable. The denouement, which I will not spoil here, is not Christie's best, but to someone who did not know the plot of the book, I can see how one might be surprised.

As expected, David Suchet turns in a fine performance as the little Belgian sleuth. There is not much to say about his performance aside from the fact that he does a good job. Zoe Wanamaker is excellent as ever as Mrs. Oliver, this episode being her last for"Poirot." Zoe Wanamaker's Ariadne Oliver was one of the most enjoyable things about these last episodes of "Poirot." She captured the character's eccentricities brilliantly, easily making her my favourite addition to the show's cast. Sean Pertwee also turns in an fine performance as Sir George Stubbs. To those interested in just how small the world is - Sean Pertwee is the son of Jon Pertwee who has gained notoriety today as playing the Third Doctor on "Doctor Who."

In terms of production, "Dead Man's Folly" is one of the best-looking episodes of the series. Interestingly enough, the episode was filmed at the Greenway Estate, which was Agatha Christie's home and probably served as the inspiration for many of her stories. In the excellent book, "The Secret Notebooks of Agatha Christie," author/editor John Curran reveals a sketch of the estate done by the authoress which later ended up inspiring the setting for another Poirot novel, "Five Little Pigs."

Overall, "Dead Man's Folly" was another stellar episode, surely making the 13th and final series of "Agatha Christie's Poirot" among the show's finest. I give the episode 4 out of 5 stars. The question is - would its final two episodes retain this level of quality? We'll find out...
Posted by Nick Cardillo at 6:08 AM