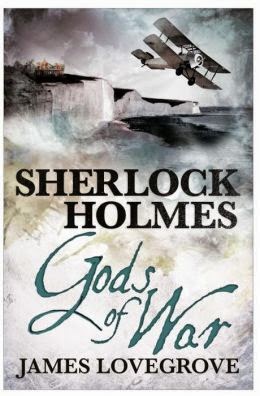 James Lovegrove has dipped into the Sherlock Holmes sub-genre once more following his first effort The Stuff of Nightmares which was published last year. That book found Holmes and Watson fighting evil in a steampunk world. Though I am not particularly fond of the sub-genre, I did find myself enjoying the novel and so I did not think twice about purchasing Lovegrove's second Sherlockian foray, Gods of War.

Set in 1913, Gods of War finds Sherlock Holmes living out his retirement keeping bees in Sussex. Dr. Watson journeys to the seaside to visit his friend, and no sooner has the doctor alighted from his train than he is swept up into a mystery with his old friend. Holmes and Watson investigate a jewel robbery, but the case serves as a prelude to bigger things. While taking a stroll on the beach, the duo come across the body of a young man washed up on the shore. The man's father, industrialist Craig Mallinson, hires Holmes to look into the case hoping to prove that his son committed suicide after being jilted by his lover. Yet, the woman in question believes that there is more to the young man's death, insisting that his death is in some way connected to a mysterious cult operating in the village. Holmes and Watson's investigations will lead them into uncharted waters as they uncover a conspiracy and a world which is on the brink of a war the likes of which has never been seen before.

As I have written before, the subject of Sherlock Holmes' life in retirement has influenced many writers in the past. The publication of Gods of War is timely, not only has it honours the 100th anniversary of World War I, but as it serves a nice prelude to the movie version of A Slight Trick of the Mind starring Sir Ian McKellen which is slated for release sometime early next year. So, does Gods of War add to the multitude of similar works? In short, it does. Much like James Lovegrove's The Stuff of Nightmares, his second novel is immensely entertaining. Its fast-moving plot doesn't allow for much downtime, but when the plot slows down to deliver exposition, it retains a level of interest and I found myself reading the book in only a few sittings.

Also of note were the excellent representations of Holmes and Watson. Lovegrove's Watson-like tone has improved greatly, as has the voice of the great detective. The presentation of the characters in retirement is also well-done, with many references to the duo's cases made. Particularly noteworthy is a scene in the book's opening chapters where Holmes and Watson discuss superstitions which include one or two nice nods to The Hound of the Baskervilles. That famed work is referenced again later as Holmes and Watson are pursued through the fog by one of the villain's mastiffs.

While much of Gods of War was nicely handled, there were one or two things which hinder the reading experience. The plot's presentation can at times be cumbersome - the opening jewel robbery serving only to wet our appetites for things to come, and its connections to the true mystery are tenuous at best. A few chapters also find the detective journeying to London leaving Watson alone, and for no real reason the good doctor begins to believe that the detective has been disposed by the villains. Watson's ramblings at times border on the paranoid which can make some at times annoying narration. That's not to say that Gods of War is all bad. It is a very entertaining read with a fast-moving, intriguing plot and excellent presentations of its central characters. I therefore give it 4 out of 5 stars.
Posted by Nick Cardillo at 6:40 AM