The Horrors of Hammer (Reviews)

To those of you who are devoted to this blog and love to read my writing (do such people exist?), today might be a good day as I am presenting you with two reviews for the price of one! As you know, I'm partial to Hammer Horror films and I have reviewed a number of them on this blog, most recently in my celebration of Peter Cushing's 101st birthday. I also compiled a list of what I believe to be the Top 10 Best Hammer horrors, a list which I should revisit seeing how I've dipped back into the studio's films recently.

All-the-same, I have been doing some reading lately, much of my reading material concerning Hammer's movie output. Today, I present two mini-reviews on these books. So, sit back, relax and let your spines tingle... 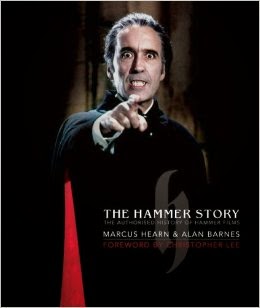 The Hammer Story by Marcus Hearn & Alan Barnes - Boasting its status as the only authorised history of Hammer films, The Hammer Story is a coffee-table book of the highest order. Both of the book's authors are more than qualified in writing this piece (Hearn is a Hammer scholar while Barnes has also penned the quintessential volume Sherlock Holmes on Screen). With two such powerhouse writers collaborating, it's no surprise that the result is magnificent.

The Hammer Story features a detailed, behind-the-scene look at the studio's horror films beginning with 1955's The Quartermass Xperiment and ending with 1975's To the Devil a Daughter. The information is insightful, giving the reader an in-depth look at the history of the studio. Despite the fact that the book covers the Gothic horror output, sections are devoted to Hammer's forays into science fiction, comedy and drama (which awards the reader with a nice write-up concerning one of my favourite Hammer efforts, Cash on Demand [1961]). Each page of the book is excellently presented with a multitude of colour and black-and-white photographs. For someone who was regrettably not very well-versed in Hammer's history, The Hammer Story was an excellent introduction. Also worthy of mention are Marcus Hearn's more recent efforts concerning the studio which include Hammer Glamour, which looks at the many actresses who formed Hammer's informal repertory company, and The Art of Hammer, a book solely devoted to Hammer's movie posters!

The Hammer Story was an excellent introduction for the Hammer fan, and with a generous helping of information presented for each film, it is a book which is sure to treat the long-time enthusiast as well. I give the book 5 stars out of 5. 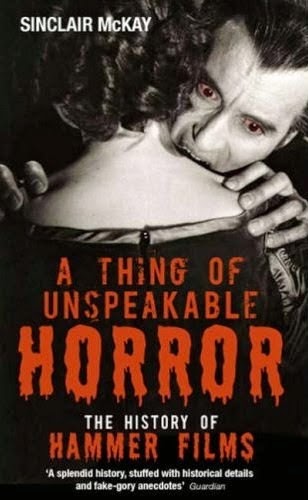 A Thing of Unspeakable Horror by Sinclair McKay - This one's slightly different. Though the book is dubbed 'the history of Hammer Films,' Sinclair McKay's book works to analyze Hammer's films, and more often than not, to draw parallels between what was presented on screen and what was going on in the real world.

Going into McKay's book, I had some notion of what to expect having read his book The Man With the Golden Touch, which sets out to do much of the same analyzing with the James Bond franchise. McKay's writing is fun and breezy, and I found myself completing this book in two sittings. However, McKay's writing may not appeal to all - as he analyzes the movies, he is far more more likely to interject his own opinions, and this opinionated style of writing will certainly not jive with all. I for one was surprised by his strong criticism of one of my favourite Hammer efforts, 1962's The Phantom of the Opera (to each their own I suppose). Nevertheless, I found McKay's style in both of his works to be incredibly entertaining, and at times laugh-out-loud funny. His assertion that the Gorgon in the 1964 film of the same name looks less like a monster and more like a begrudged landlady with a head of hot curlers was an all too true, and very funny assessment. A Thing of Unspeakable Horror was a fun, entertaining read, and while not as jam-packed with information as The Hammer Story, there was still a thing or two to be learned from McKay's analysis.

While its style may be off-putting for some, I for one enjoyed Sinclair McKay's slightly tongue-in-cheek analysis of Hammer horror and therefore I give A Thing of Unspeakable Horror 4.5 out of 5 stars.

So, there you have it. Both of these books come highly recommended from me. And Hammer fans - I hope to bring some more things your way in the future.
Posted by Nick Cardillo at 5:22 AM