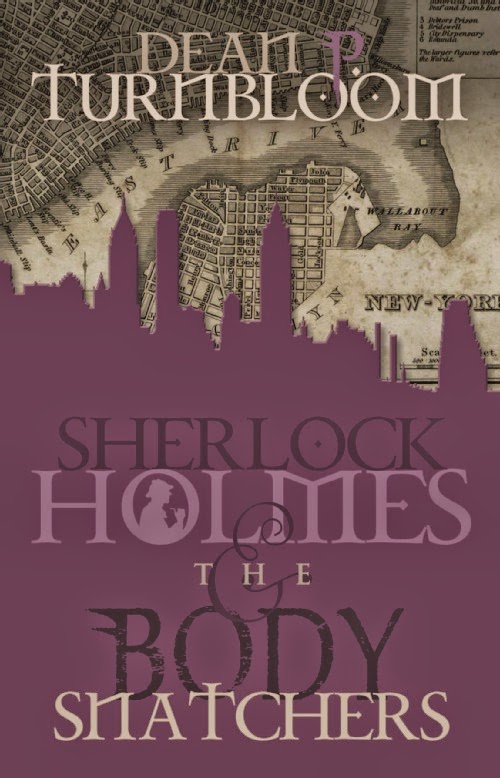 Picking up right where Sherlock Holmes and the Whitechapel Vampire left off, this novel finds Holmes and Watson disappointed in being unable to stop Baron Antonio Barlucci, the titular vampire, as well as his latest victim, Abigail Drake. However, Miss Drake's body is recovered in a lifeboat and taken to a mortuary in Canada. Inspector Walter Andrews of Scotland Yard is assigned to travel to Newfoundland and identify the body, but by the time he arrives, Miss Drake's body has disappeared. It seems as though someone has absconded with her body leaving numerous corpses in their wake. Inspector Andrews follows the clues to New York City where a number of people are beginning to be murdered. Each one has been found their bodies completely drained of blood. This is enough to entice Holmes and Watson to cross the Atlantic. Once in the Big Apple, the great detective is faced with one unnerving question - has the Ripper taken up roots in New York or are the killings the work of a vampire?

Once more, Mr. Turnbloom has managed to surprise me with his plots. Sherlock Holmes and the Body Snatchers is a complex, well-plotted, well written novel. So many plot threads are woven throughout the book's pages, and each one is nicely wrapped up in the finale. Turnbloom takes his subject matter incredibly seriously, even when he's writing about vampires in New York City. Along with the fine plot are the excellent characters. Each character is developed in depth and you will emphatise with them as you read. Even the recurring characters from the first novel are reintroeuced once more - which is good since it had been over a year since I read Sherlock Holmes and the Whitechapel Vampire.

But what of Sherlock Holmes? Well, he's rather sidelined again, which isn't necessarily a bad thing as the other characters are so interesting. He comes across similarly as he did in the canon, as does Dr. Watson. Turnbloom utilises Watson's point-of-view in the scenes which feature the intrepid detectives, which is different from previous novel which was told entirely in the third person. What's more, Turnbloom nicely emulates the canon's style of writing, but perhaps writes a bit more naturally than Doyle. What does that mean? It means that the characters pause, breathe heavily and clear their throats mid-sentence, which at first may be something of a stumbling block to the reader, but is easily overcome.

There are a few downsides to this novel though. Holmes does too little detective work for my taste and by the time he has summed up the problem for the principle characters, the reader is already in possession of the truth. There's also the fact that if the reader has not read Sherlock Holmes and the Whitechapel Vampire he or she is liable to be very lost. Characters are introduced and the reader is expected to know of their importance already, and events which transpired in the first book are referenced and hinted at, and then never fully explained. Therefore, I highly recommend reading Turnbloom's first novel before moving onto its sequel.

I was once more surprised by Dean P. Turnbloom's Sherlockian efforts. Sherlock Holmes and the Body Snatchers was a complex, well-written and excellently plotted novel which pit the world's greatest detective against the forces of evil once more. I therefore do not hesitate in awarding the novel 4 out of 5 stars.

Sherlock Holmes and The Body Snatchers is available from all good bookstores including   Amazon USA, Amazon UK,Waterstones UK, and for free shipping worldwide Book Depository . In ebook format it is in Amazon Kindle,  Kobo, Nook andApple iBooks (iPad/iPhone).