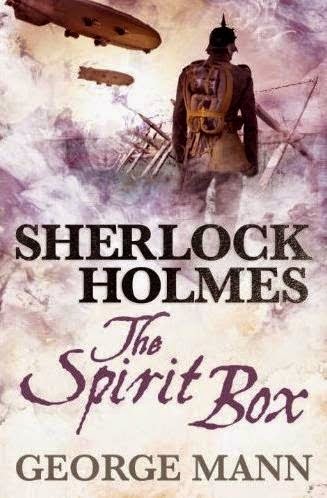 George Mann has returned to add another chapter to the Sherlock Holmes mythos with The Spirit Box. Set during World War I, Dr. Watson finds himself living in a London under constant threat. German zeppelins are dropping bombs on the city and many have evacuated. Amid this chaotic scene, Watson reunites with Sherlock Holmes who has been called away from his retirement in the Sussex Downs by his brother Mycroft. Three mysterious deaths have piqued Mycroft's interest - one of a government official who threw himself into the Thames, a military advisor who feeds himself to a lion at the London Zoo and a woman suffragette who jumps in front of a moving train.

While the three deaths seem to be suicides, Holmes is not so sure. Teaming up with Watson once more, the two begin their investigation, and before long begin to hear of a fabled spirit box. What is it and how did it connect the three deaths? Holmes, ever the skeptic, will be faced with one difficult question: could the victims have been possessed at the times of their deaths?

George Mann's writing, from what I have read, seems to be lean more towards the science fiction and steampunk aspects of fiction. This was clearly evident in his first Sherlock Holmes novel, The Will of the Dead, which featured mechanical, steam-powered men. So, going into The Spirit Box, I had some idea that the story might take a sci-fi turn. Yet, I was very surprised. Without giving away too much information, the plot twists in the novel remained fairly grounded, and even some of the more wild notions discussed in the novel had a good explanation. This helped the novel retain some continuity with Doyle's canon.

The Spirit Box nicely captured the voices of the main characters. Holmes and Watson were excellently presented - Watson especially. While at times Mann's tone didn't mirror Doyle's exactly, the novel was always fun to read. Interestingly, Sir Maurice Newbury makes a brief appearance in the novel. Newbury, an investigator with a predilection towards the bizarre, is a creation of Mann's own imagination and has appeared in a series of novels and short stories. I have never read any of Newbury's stories, however the collection of short stories on which he appears has tempted me at the book shop many times.

While The Spirit Box was quite good, there were a few minor faults. Despite the fact that the novel takes place during the height of the First World War, never is Doyle's story His Last Vow mentioned. This would have furthered the continuity between the canon and the novel. Also, the book was a little on the shorter side - it was only a little over 200 pages. Therefore, the climax seemed a bit rushed, and while the ending does leave the possibility open for further adventures between Holmes and Watson, it was a little ambiguous.

All in all, The Spirit Box was a fun and enjoyable read. Featuring excellent portrayals of Holmes and Watson as well as a tight, surprising plot, I do not hesitate in awarding the novel 4 out of 5 stars. I hope that Mr. Mann will put pen to paper and deliver more in the near future.
Posted by Nick Cardillo at 3:46 AM