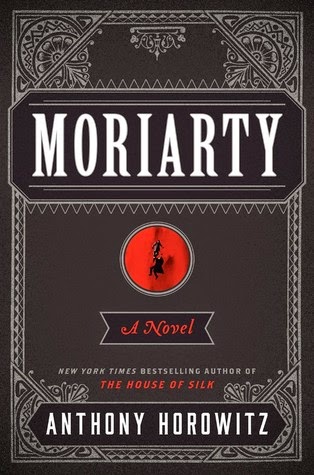 I hope that I have made it clear on this blog that I really liked Anthony Horowritz's Sherlock Holmes novel, The House of Silk. The plot and presentation of Doyle's characters was exceptional, making it one of the best pastiches in recent memory. Perhaps due to the fact that I enjoyed his novel so much, I was a little disappointed to learn that his follow-up novel, Moriarty, would not feature the great detective in anyway.

All the same, I was interested to read Horowitz's novel and hoped that it would reach the high expectations which I'd set for it following The House of Silk. So, how did Moriarty fare? Let's take a closer look...

The novel begins in 1891. Sherlock Holmes is presumed dead following his struggle atop the Reichenbach Falls with Professor James Moriarty. The novel's narrator, Frederick Chase, an investigator for the American detective agency, the Pinkertons, is dispatched to Switzerland after a body is recovered from the Falls' basin. There Chase meets Scotland Yard inspector Athelney Jones, and together they investigate the corpse. The two discover a slip of paper concealed on the dead man, addressed to Moriarty, which leads them to believe they have found the Napoleon of Crime. The paper alludes to a meeting between Moriarty and American crime boss, Clarence Devereaux, who Chase has pursued to London. Chase and Jones return to London and begin their investigation, entering a dark world of murders and unexpected twists.

I really do not want to give away too much of the plot since it is surprising on its own, and I wouldn't want to be the one who spoiled it for you. Suffice it to say that I should have had no qualms about Horowitz's plotting. The story moves along at swift pace, easily pulling you into the narrative. Like his first Sherlockian foray, Moriarty is a dark novel,and surprising violent in places. So, the reader with a weak constitution should be warned. In the absence of Holmes and Watson, Horowitz has created the characters of Frederick Chase and Athelney Jones. Chase makes for a fine narrator and proves to be a complex character. Jones is not an original creation, having appeared in Doyle's The Sign of Four. After having been shamed by Holmes during the course of that investigation, Jones studied the great detective's methods, and practices them during the course of the novel. In this way, Jones substitutes for Holmes, and does an admirable job, unraveling the tangled plot which is woven through the book's pages.

In some respects, Moriarty can be viewed as an inverted Sherlock Holmes story, telling the story of an investigation in the Sherlockian universe from the police officers' perspective. These scenes were surely the novel's strongest, perhaps the greatest set-piece occurred as Jones and Chase discuss the case with other inspectors at the Yard who cropped up in the Canon. Seeing characters such as Inspectors Lestrade, Gregson, McDonald and Hopkins all under one roof brought a great smile to my face. And like The House of Silk, Horowitz proves to have a tremendous grasp of the Canon with a number of asides and references to the original stories. He did make one tiny error by saying that Inspector McDonald had never met Sherlock Holmes, though the two worked together in The Valley of Fear, which was set some two years before the events of this novel.

As I noted above, if I'm being vague I'm doing so intentionally. The plot is thoroughly surprising, with a well-implemented pot twist which I didn't see coming, but in retrospect I certainly should have. I am happy to say that Anthony Horowitz has succeeded in producing a fine follow-up to his first Sherlockian foray, with an intense, interesting plot, and likable original characters. Therefore, I award Moriarty 4 out of 5 stars.
Posted by Nick Cardillo at 6:36 AM