The Appeal of the Victorian 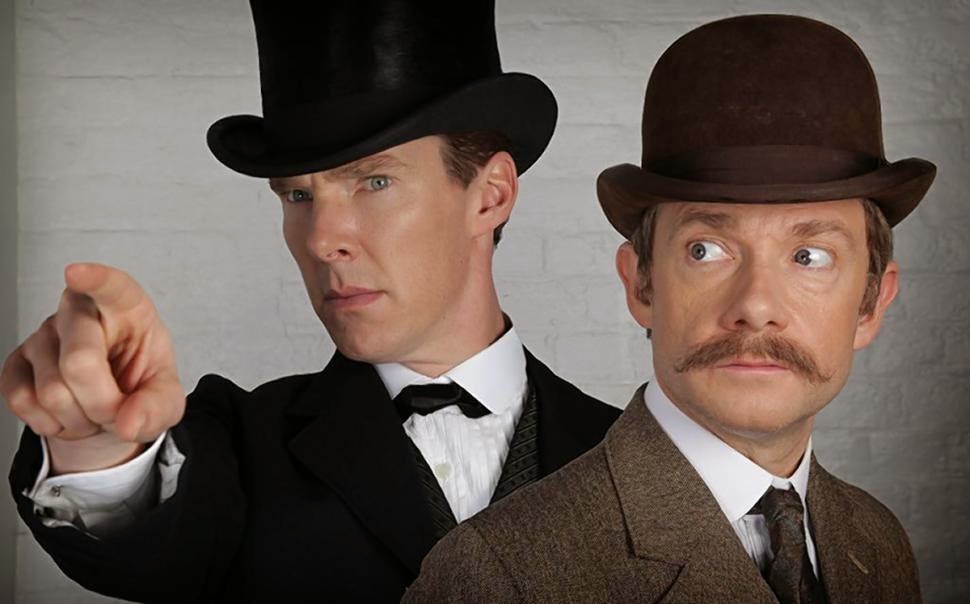 By now I'm sure that Sherlockians the world over have seen the picture at right, the promotional photo for the special episode of Sherlock. There have also been pictures snapped on the set which show Benedict Cumberbatch and Martin Freeman in period costume once more, adding to the mystery of these photos. My personal hope is that the special will be set in the Victorian Era, unrelated to the arc set out in the previous three series.

The very fact that Cumberbatch and Freeman are dressed in period attire for this special seems to betray the public's predilection towards all things pertaining to the Victorian Era. Why after three seasons are the makers of Sherlock (possibly) returning to the characters' origins, when their intention was to show how Holmes and Watson could inhabit the modern world? While it may seem like it's going against the show's raison d'etre, I think general consensus towards the above picture has been positive, and has at the very least generated discussion and speculation (which there is always a lot of when it comes to Sherlock).

When it comes to the BBC, they can pull off the Victorian look brilliantly. They have been able to do for years, and in retrospect the Victorian and Edwardian Eras are pretty simple for television and film studios to replicate. There are no puffy shirts and collars, no obnoxiously bustling dresses or knee-breeches. In terms of costuming, things are rater similar, just a bit more formal. Set and production design is also easy to handle, especially in today's world of computer-generated graphics. You need a thoroughfare bursting at the seams with hansom cabs? That can be simply done with a few taps of computer keys. The relative ease with which the Victorian Era can be brought to life is one of the most often argued reasons why the locale is so often used on Doctor Who. Since the show's revival n 2005, the TARDIS has cropped up in Victorian England five times. When it comes to Doctor Who, it certainly seem easier to dress a set like a Victorian parlour than a far-off galaxy.

I keep returning to aesthetics, and I think that's one of the reasons audiences like the era so much. But, something must be said for the manners of the era. Especially in the aristocracy, good-mannered conduct was required. Modern audiences I think are captivated by this notion,and I think there's a certain thrill when those morals are broken by a film or television show's characters. Just as audiences love an antihero today, we get a certain thrill when we can watch someone breaking the rules of society from the comfort of our own sofas.

But, as I alluded to earlier, there is a certain reliability to the Victorian Era. The fact that some of literature's most famed creations emerged during the period, and these creations were invariably transferred to film countless times, has ingrained the Victorian world in the public's consciousness. It has become familiar and relied upon. Take for example the 2012 horror film, The Woman in Black. Produced by Britain's Hammer Films (after a hiatus of thirty-odd years), the studio decided to go with the familiar and produce a film set in the Victorian Era, immersed in Gothic horror, as that was what had worked for them so well during their heyday in the '60's and '70's. Hammer could have returned to screens with a run-of-the-mill slasher film, but they didn't. The studio returned relying on their formula which had thrilled audiences for years.

So, all of this leads to the question of the hour: is it time for the return of a period-set Sherlock Holmes series? It's clear that audiences seem to enjoy the period of history; look at the two Robert Downey Jr. films. Both of them are set in the 1890's, and both have been financially successful. Look at Downton Abbey which has become a cultural phenomenon on both sides of the Atlantic. True, Downton Abbey is set in Edwardian England, but for the purpose of this post, the two eras are similar enough. Personally, I feel the time has come. As we've seen, the Victorian era has been excellently realised in a number of mediums, so why not bring it to television. It would be great to see the detectives in their proper setting and a return to tradition.

But, let's just make one thing clear: at the end of the day, the era doesn't matter. As history has shown, Sherlock Holmes can work in a variety of eras (from the Victorian, to the present to the future), and at the end of the day it's respect to the character which matters.
Posted by Nick Cardillo at 5:10 AM