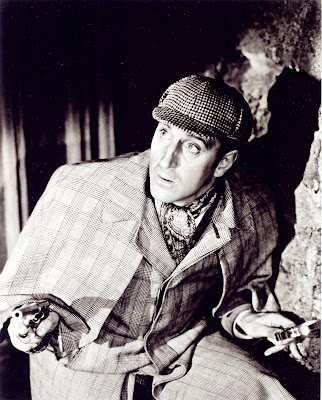 Interestingly, of the three men who I considered possible candidates for the Immortal Sherlock Holmes, Basil Rathbone was the one I discovered last. Nevertheless, Basil Rathbone has settled a place in my heart as one of my very favourite Sherlockian actors. Whether he was acting in 20th Century Fox's series or Universal's, he consistently portrayed the detective wonderfully.

What makes Basil Rathbone perhaps most interesting is he was truly the first actor to be identified with the role of the detective. Granted, British character actor, Arthur Wontner, was associated with the character for six years in the early 1930's, but sadly Wontner is forgotten today. So, that makes Rathbone perhaps the first actor who was known for playing the detective. Rathbone wanted to lose the shadow of the detective later in life, but he was forever in the character's debt. Prior to 1939's "The Hound of the Baskervilles," Basil Rathbone was mainly known for playing villains. At the time, he was perhaps best known for playing the evil Sir Guy of Gisbourne in Warner Bros.' "The Adventures of Robin Hood" in which he ended up skewered on the end of Errol Flynn's sword.

History was truly made in 1939 when 20th Century Fox went into production on "The Hound of the Baskervilles." It would be the first sound film to feature Sherlock Holmes in his proper Victorian milieu - and he wouldn't return there for another 15 years. To this day, the 1939 version of the story is perhaps the best remembered and most enjoyed by fans. Rathbone looks wonderful in his debut role, truly becoming the part like no one had done before. Even in his first few moments on screen, Rathbone showed himself to be the epitome of thousands of reader's imaginations - wonderful encapsulating the detective's potentially stiff, upper-crust nature.

Looking back on it today, it's odd that Basil Rathbone, the star of the film as Sherlock Holmes, is actually billed second under Richard Greene, a relativity inexperienced actor who was playing Sir Henry Baskerville. Perhaps in Fox's mind, Holmes wasn't the romantic lead of the movie and therefore didn't deserve top billing. Nonetheless, this was rectified in the studio's second film, "The Adventures of Sherlock Holmes" which is quite possibly Rathbone's finest hour (or rather hour and 21 minutes). Once more he was looks wonderful in the role and he plays the detective with such style, one's liable to become memorized by his performance. He is able to draw the viewer in so well - much like Jeremy Brett did and Benedict Cumberbatch continue to do.

Everything changed when the series moved to Universal studios in the 1940's - except for Rathbone's performance. He still played the role with style, and even though the series was set in the (then present day) 1940's, Rathbone still brought the same Doylean fidelity to the part. It was only in his last few films could you see Rathbone's interest begin to fade in his character. The part had lost the appeal and the challenge, and of course he feared typecasting. In 1946, Rathbone stepped away from the role. He didn't return to the screen until 1954 after a hiatus on the stage. It was during this time that Rathbone won his a Tony for Best in a Play for his work as Dr. Sloper in 1948's "The Heiress."

So - Basil Rathbone is surely one of the most famous actors to have taken on the role of Sherlock Holmes. he is highly regarded in Sherlockian circles and is certainly worthy of that honour. Despite the fact that I came rather late to Rathbone's work as Holmes, I certainly enjoy his performance, and he is tied for my favourite Sherlockian actor. However, I think that Tom Weaver, Michael Brunas and John Brunas summed it up best in their magnificent book, "Universal Horrors" which chronicles the Universal horror and mystery films from 1931 to 1946. They wrote:

...Their enduring charms have not been lost on generations of film fans. Until the popular...television series with Jeremy Brett in the '90's, Basil Rathbone was virtually unrivaled as the quintessential screen incarnation of Sir Arthur Conan Doyle's master detective.

Posted by Nick Cardillo at 2:20 PM