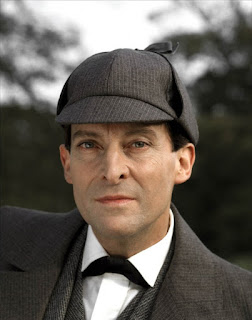 It may sound hard to believe, but sometimes one liable to forget just how good of an actor Jeremy Brett was. During his run as Sherlock Holmes on the Granada television series, Brett established himself as one of the greatest performers in Sherlockian history - bringing the great detective to life like few have before him or since. He remains one of the most beloved actors to Sherlock Holmes fans, but is he the immortal Sherlock Holmes?

Much like I did with the "Audio Holmes who Shall Reign Supreme" back in late February, I shall look at the three nominees who could deserve the title of The Immortal Sherlock Holmes. Today, we shall begin with Jeremy Brett.

24 April, 1984 - this is a momentous day for Sherlock Holmes fans. They probably don't know it yet, but the history of Sherlockian entertainment is about to change. Granada has mounted a Sherlock Holmes television series, which they hope will be the Sherlock Holmes series of all Sherlock Holmes series. Michael Cox is the man behind the mission who was determined to bring the television show to life. The conception of the show might have started on troubled grounds, having been sued in 1983 by the producers of the two made-for-television movies starring Ian Richardson as Holmes, but Cox persevered. In the all important role of Holmes was Jeremy Brett, who was determined to bring the detective to life, and remain true to Arthur Conan Doyle's original creation.

On the 24th of April, history was made as "The Adventures of Sherlock Holmes" debuted starring Jeremy Brett and David Burke. To the Sherlockian enthusiast, this show was certainly some of the best entertainment to come their way until "Sherlock" in 2009. The show was brilliantly executed and Jeremy Brett was perfectly cast as Holmes. He closely resembled the original illustrations of Sidney Paget from the Strand Magazine, and even some scenes mirrored his drawings exactly. David Burke as Watson will revolutionize the portrayal of the famed medical practitioner for years to come, leaving behind him the portrayals of Nigel Bruce and others.

As a Sherlockian fan, I think that "The Adventures of Sherlock Holmes" is some of the best television shows of all time. Jeremy Brett and David Burke are wonderful as Holmes and Watson and both men seem to be having such a fantastic time in the roles of detective and his faithful Boswell. I feel that any self-respecting Sherlock Holmes enthusiast must watch this series. While the following three series and the made-for-television adaptations do have their moments, it hardly compares to the level of excitement and fun which is generated from watching "The Adventures." However, as the show progressed, it became obvious that the quality began to drop. It is quite sad that as Jeremy Brett's physical and mental health decreased, so did his ability to firmly grasp the character of Sherlock Holmes. Just when the best of Arthur Conan Doyle's stories were gone and an actor was needed to carry the show, they did not have one.

"The Memoirs of Sherlock Holmes" - Jeremy Brett's final season as the detective - is very hard to watch. Brett is obviously struggling to finish, and his final few episodes are a far cry from the great moments which the earlier episodes were able to inspire. On 11 April, 1994 - a little less than ten years since the show's start - Jeremy Brett made his final appearance as the detective in "The Adventure of the Cardboard Box." Brett died at the age of 61 a little over a year later.

Take the Poll: So, is is Jeremy Brett, Basil Rathbone or Peter Cushing? Of these three actors, could any of them be considered the Immortal Sherlock Holmes - the one who shall transcend time and be remembered for years and years after as the one and only Sherlockian characterization? So if you feel so inclined, take the poll and leave a comment.
Posted by Nick Cardillo at 3:46 PM