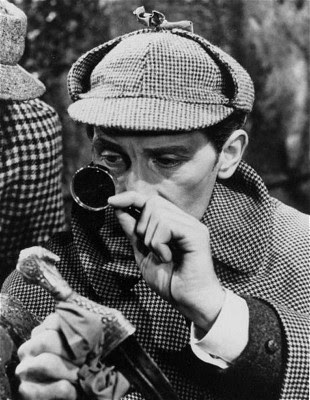 To me, Peter Cushing is invariably linked to "The Hound of the Baskervilles." Quite a few years ago, shortly after I first became interested in the character of Sherlock Holmes, a community theater chose to put on a play of "The Hound." Not knowing the story, and perhaps too young to read Conan Doyle's original, I settled for a movie version which was being broadcast on television. It just so happened to be the 1959 film with Peter Cushing as Holmes and Andre Morrell as Watson. It was my first real exposure to "The Hound" and to Holmes media, aside from the Jeremy Brett television series.

Looking back on it now, the 1959 version of the "The Hound of the Baskervilles," could possibly be my favourite. Despite the fact that it doesn't follow the plot of Doyle's novel, Cushing's performance is grand, and the atmosphere of Gothic horror and suspense is beautifully created. Even though Cushing is perhaps not everyone's first choice as Holmes (and he is currently losing in the poll), I still wanted to include him and give dear old Peter Cushing his fighting chance to be considered for the honour of The Immortal Sherlock Holmes on this blog.

Hammer Film's "Hound of the Baskervilles" was perhaps a long-overdue film for Sherlockian fans. It had been twenty years since the last adaptation and 13 years since Basil Rathbone had left the role of Holmes. Sure, there had been television versions of the Sherlock Holmes stories, but nothing spectacular. So, along comes a studio who had just made a name for itself by recreating Gothic masterpieces such as "Frankenstein" and "Dracula," and their next project was a Sherlock Holmes film - in Technicolor nonetheless. In the role of Holmes was Peter Cushing - the Baron Frankenstein and Professor Van Helsing from Hammer's previous two outputs. As Watson was Andre Morrell - best known to audiences as Professor Quartermass. As for Sir Henry Baskerville - there was Christopher Lee, the long, lean actor who had beautifully pantomimed the role of Frankenstein's Monster and delivered chills as Count Dracula.

Honestly, the 1959 version of "The Hound" is spectacular. If you are a self-respecting Sherlockian and you have not seen it, I highly advise you do so now. Everything about it is wonderful. The costumes, the sets, the acting (for the most part) and most importantly the atmosphere. I feel that this version of the film is the only one so far which has nailed the atmospheric overtones the novel was permeated with (even if that meant creating a ruined abbey, an abandoned mine shaft and giving the villain a set of webbed hands). What's best about this movie is Cushing's acting though. He plays Holmes as cold, condescending and rather prickly. Nevertheless, it's brilliant. Sherlock Holmes was never supposed to be a warm and friendly guy, and think that Cushing's acting is inspired. That's why I know use his picture for my Google Profile. But that's beside the point. 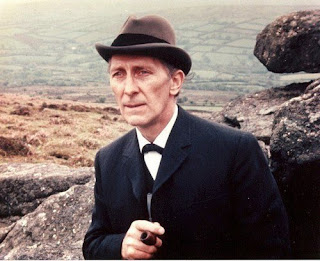 I really ought to give this movie more time, and hopefully I will in the future. Sadly, "The Hound of the Baskervilles," performed badly at the box office and Hammer's hopes of continuing the Sherlock Holmes series were squashed. However, Peter Cushing would return to the role of the detective in 1968 for "Sir Arthur Conan Doyle's Sherlock Holmes," a television series commissioned as a follow-up to the highly successful run with Douglas Wilmer as Holmes. Watching, "Sir Arthur Conan Doyle's Sherlock Holmes," one cannot help but interested. Though the production values aren't fantastic, the show is fascinating in that it was the Granada television series' predecessor. While Cushing wasn't the cold, prickly man he was from the Hammer film, he continues to excel in the role - slowly us a more relaxed and down-to-Earth detective. Cushing felt so passionate for the role, that he involved himself with the script-writing process and even costuming.

It is unfortunate that a number of the episodes of the show no longer exist. It was the BBC's policy in the late '60's to "junk" a number of film reels after a show's transmission. Therefore, a great chunk of the detective's history is lost. To Sherlockian worldwide, we hope the lost episodes turn up sooner or later. Peter Cushing returned to the role of Sherlock Holmes one last time before his death in the 1984 television movie, "Sherlock Holmes and the Masks of Death." Today, many fans consider this Cushing's finest hour as the detective.

In summation, I have a special place in my heart for Peter Cushing. I am very fond of his performances, and look to him as one of the very best Sherlockian actors. While criminally underrated, Cushing continues to shine as one of the best for Sherlock Holmes fans.
Posted by Nick Cardillo at 10:00 AM