Review - "A Big Hand for the Doctor" 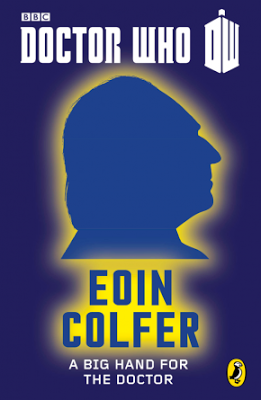 To celebrate 50 years of "Doctor Who," the BBC and Puffin Books have collaborated on creating a series of 11 e-books, all written by famous authors who will tackle a story for each of the eleven Doctors. First up was Eoin Colfer who tackled the First Doctor in "A Big hand for the Doctor."

1900 - the Doctor and his granddaughter, Susan arrive in London on the trail of the infamous Soul Pirates. In his last battle with the cursed intergalactic beings, the Doctor lost his hand, and is now on the search for the pirates in an effort to reclaim his missing appendage. However, the Soul Pirates are a dangerous gang of men and the Doctor surely has his work cut out for him this time.

To most audiences, Eoin Colfer is best known for writing the "Artemis Fowl" books. I have never read the series, so I cannot say if Colfer's style of writing is typical for this story. Nevertheless, I just didn't like it. He makes everything seem as though it isn't all that important and even when he dealing with dark, serious material, he deals with it in a flippant and rather non-serious manner. Even in situations where children have been abducted by the Soul Pirates and are facing death, the tone is still a light one. This felt at odds with the rather dark story being told. Furthermore, Colfer seemed to be parodying the First Doctor. In some ways, the First Doctor perhaps the hardest to write about. He's a stuffy, upper-crust man who really portrays a somewhat cliche pompousness. He is really at odds with any of the other incarnations who followed him.

Nevertheless, the First Doctor is important to the history of the show, and should be treated with some respect. I feel like if Colfer was going to write in a more relaxed, comedic style, he should have selected a later Doctor. However, instead we get a character who really doesn't act like himself. We have an energetic Doctor going cane-to-sword in a fight with a pirate and acting in your stereotypical action-hero kind of way. This is certainly not the way that the First Doctor was portrayed - a man who left most of the legwork up to his companions.

So, can I find any things to like in this story? There were occasions when the humour was funny, and the way that the standoffish nature of the Doctor was examined was interesting. The ending which featured J.M. Barrie writing about the events he witnessed (a man fighting a pirate with a hooked hand a children covered in what appears to be star dust) was quite clever, and I liked the way it was presented. Aside from that, I really cannot think of much more that was truly "Doctor Who"-esque about the story.

To sum up, "A Big Hand for the Doctor," is a rather underwhelming beginning to a potentially great series. Eoin Colfer handles the character of the First Doctor rather poorly, and one is inclined to think that if he had written a story featuring a different Doctor, would it have been better? That's a what-if, and I don't like to indulge in them too often though. I give "A Big hand for the Doctor" a 2 out 5 stars.

Coming Next Time: "The Nameless City" by Michael Scott
Posted by Nick Cardillo at 1:17 PM