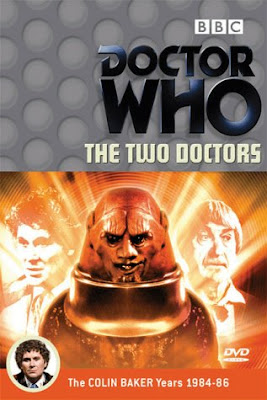 It is interesting to note that there are times when certain episodes of "Doctor Who" are universally loved by all - except for a select few. This story is one of those instances. Perhaps "The Two Doctors" is not universally loved by everyone who has ever seen it, but a large majority of its viewers have taken a strong liking to it. I will be perfectly fair, I liked this story, but I feel as though there was untapped potential in here, and improvements could have easily been made to make this serial a truly memorable one.

Commissioned by the Time Lords, the Second Doctor (Patrick Troughton) and his companion, Jamie (Frazer Hines) arrive on a large space station to meet with one of their head scientists. However things go horribly wrong when a dangerous race of aliens called the Sontarans invade the station and kidnap the Doctor. Meanwhile, the Sixth Doctor (Colin Baker) and Peri (Nicola Bryant) find themselves on the same space station in the invasion's aftermath and learn that they must save the Second Doctor before it is too late. Their journey will cross the universe as they arrive in Spain and learn the dark secret agenda of the Sonatarans.

"The Two Doctors" was written by Robert Holmes, who had been associated with the series for years and had been responsible for some of the series' greatest episodes. With a script from him, it seemed as though this story was in good hands. That's not exactly what happened. The greatest problem with this story is its rather weak script, which seems to have crippled a number of the Sixth Doctor's stories. There are occasionally some good moments, but the script for the story is just jumbled. The worst part of it all is that the two Doctors hardly have any screen time together. They don't share a scene until the 3rd and final episode, and that's only for a very short while. What's more, the Second Doctor is little more than a plot device in this story. He has very little importance in the story and when he's on screen he has little to do, thus giving Patrick Troughton very little to do.

Well, let's look at a few of the positives shall we? First of all, Colin Baker is now perfectly comfortable in the role of the Doctor. This episode shows that he has found a good balance between kindness and cockiness and his performance as usual is fantastic to watch. Also, the villains of the story are great. While the Sontarans are rather underused, the main humanoid villains are brilliantly executed. The stand-out performance is that of John Stratton who stars as Shockeye, a cannibalistic alien with a desire to "taste a human beast." He is without a doubt, the creepiest part of the episode, and his truly terrifying presence delivers chills up and down your spine.

I am able to overlook separating the two Doctors in the story - I am able to overlook the little screen time and chemistry that they may have, I may even be capable of overlooking the obvious padding which the story suffers, however there is one problem which I cannot understand about this story. That is the excessive amount of violence. While "Attack of the Cybermen" used violence to show the strength and power of the Cybermen and "Vengeance on Varos" used it to show how twisted and warped the government and people of the planet had become, "The Two Doctors" had no need for such excessive violence. Lots of people die throughout the story and there isn't much reason behind it. (If you wish to avoid spoilers jump over the rest of this paragraph) For example, one of the minor characters in the serial is an English actor named Oscar who is on holiday in Spain taking care of a friend's restaurant. When the Second Doctor, whose DNA has been changed through a number of experiments, and Shockeye arrive, the latter kills Oscar when he refuses to pay for his repast. Oscar adds very little to the story, and his only real reason to be there is to die - but you know what - he didn't even need to die? His death adds nothing at all to the story, and it is only there to be there.

"The Two Doctors" isn't the worst Sixth Doctor serial into which you could look. The script faces a number of problems, but the location shooting in Seville and Colin Baker's performance do make up for it in some respects. It was nice to see one of the previous Doctors share the screen again since it would be the last time a Doctor's previous incarnation appeared in an episode. It awarded Patrick Troughton one last chance to play the Doctor, and he shows his obvious love for the character in this story. One only wishes he could have been on screen a bit longer. As the Second Doctor might have said: "Oh my giddy aunt...oh crumbs."

Coming Next Time: Can I survive the "Timelash?"

Notes: I don't usually add notes to these analyses, but I just felt like I should. Patrick Troughton leaves a great impact on the series. Following William Hartnell's rather stuffy, upper-crust version of the Doctor, Troughton's was completely different and set the standard for the type of personality the Doctor would most likely have in the future. He greatly influenced Matt Smith's performance as the renegade Time Lord, who cites the Second Doctor serial, "Tomb of the Cybermen" as his favourite. Patrick Troughton died two years after his final performance as the Doctor in "The Two Doctors" at the age of 67.
Posted by Nick Cardillo at 9:04 AM