Review - "Doctor Who: Mummy on the Orient Express" 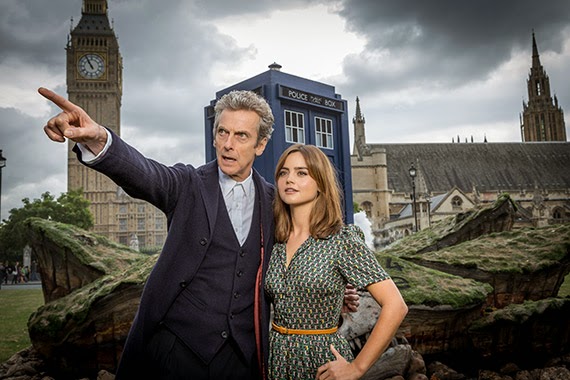 Warning: This review will contain spoilers!

Following their dispute during last week's episode Kill the Moon, the Doctor (Peter Capaldi) and Clara (Jenna Coleman) decide to go on one final adventure. The Doctor takes her to an intergalactic version of the Orient Express. The train seems to be full of scientists, and one by one they're mysteriously dying. It seems a mummy is loose on the train and those who gaze upon it have only 66 seconds to live. What is it, why is it killing those on the train, and how can it be stopped?

The premise behind Mummy on the Orient Express is probably the most original of the series so far. It is also in my opinion the coolest premise for an episode in the while. I am of course rather bias by my love for vintage horror and Agatha Christie (nicely blended together here by writer Jamie Mathieson), but as the plot progressed and the script ventured into original territory the episode contained to be very enjoyable. Despite it's title, Mummy on the Orient Express does not rely too heavily on Agatha Christie. It was nice though to see the Doctor play detective in a sense as he tries to determine the mummy's motivations and origins.

It was good to see Peter Capaldi really get to be in the limelight this week, especially since the past two episodes have focused heavily on Clara. Capaldi's customary intensity really added weight to the situation and he drew me into the story. I also loved the Twelfth Doctor's eccentricities; proffering a fellow passenger jelly babies from a cigarette case was a genuine laugh-out-loud moment.

The episode was also incredibly visually striking. The mummy was a true feat of special effects, surely one of the best-looking monsters in Doctor Who's recent history. The sets for the Orient Express were also very well-done which accentuated the '20's-era trappings of the costumes and music. (Special mention to the always-reliable composer Murray Gold whose jazz-fueled score for this episode was a real treat.) Another nice visual touch was the clock in the corner of the screen which counted down the 66 seconds which victim had to live. These portions of the episode told in real time added to the tension and suspense of the story.

My only gripe with the story was its conclusion. There was an incredible amount of build-up to the solution and when we finally learn the mummy's true motivations, it comes as something as a let-down. Granted, the story wasn't exactly a mystery but it could have played up this aspect a bit more. As an aside, the episode clearly drew some inspiration from the 1972 horror film Horror Express starring Christopher Lee and Peter Cushing which finds a hulking alien being loose on the Trans-Siberian Express...whose victims die after gazing upon its face.

In all, Mummy on the Orient Express was the highlight of the series. With an intense, original story and some fun acting on Peter Capaldi's part, I award the episode 4.5 out of 5 stars. Interestingly, Jamie Mathieson will also be writing next week's episode, so I have high expectations once more.

Next Week - Flatline by Jamie Mathieson
Posted by Nick Cardillo at 7:46 AM