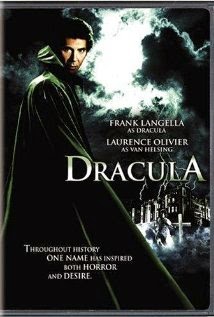 To celebrate Halloween, here's my pick for the best Dracula film - the winner, the 1979 version released by Universal starring Frank Langella as the vampire. This oft-overlooked film is without doubt the most atmospheric and stylish version of Bram Stoker's story ever committed to film and boasts a particularly fine cast.

The 1979 version began life as a revival of the 1920's stage play which had originally starred Bela Lugosi. The show was performed both in America, where Frank Langella took the role of the vampire, and in Britain where Jeremy Brett took on the role. The play, featuring sets designed by famed illustrator Edward Gorey, was a tremendous success which eventually spawned a film version. In the director's chair was John Badham, whose last directorial job prior to filming Dracula was Saturday Night Fever! However Badham managed to create a truly awe-inspiring atmosphere for the film. It's a beautiful film to watch.

Many reviewers today complain that the latest DVD (and blu ray) releases have drained all of the colour from the film. This is true, but the result is brilliant. The re-coloured DVD adds tremendously to the overall atmosphere, accentuating the bleak nature of the story. What's more, when there are scenes of vivid colour, there is a greater contrast (like the controversial vampire wedding with lasers and the brightly-lit climax). The action is also updated to 1913 which gives the characters the opportunity to inhabit a stylish Edwardian world.

Of course taking centre stage is Frank Langella's Dracula. Langella performs the role in the vein of Bela Lugosi - a cool, hypnotic vampire. However, Langella doesn't perform with the same theatricality which Lugosi did which makes this Dracula all the more creepy and manipulative. Langella's subtly-played Dracula makes him seem eerily alone and humane - a point which is accentuated by changing the now-famous line of dialogue to "Listen to them, children of the night...what sad music they make." To play off of Langella's Dracula is Kate Nelligan's Lucy. Nelligan's heroine is a strong, independent character which makes her falling to Dracula's will all the more creepy.

Interestingly characterised on IMDb as a romance, the 1979 version was one of the first to portray Dracula as a romantic figure. However, the movie succeeds brilliantly in this respect. Later versions (*cough Francis Ford Coppola's version cough*) reduced Dracula's threat by making him a romantic figure. Here, Langella's vampire is still an evil, manipulative figure, yet you cannot help but feel a twinge of sadness for Dracula come to the film's inevitable conclusion.

The rest of the cast compliment Langella and Nelligan nicely. In the role of vampire hunter Van Helsing was the great Shakespearean actor Laurence Olivier. While it could be argued that Olivier was slumming it in this horror film, Olivier delivers a strong performance, and the script afforded the actor an interesting acting opportunity as Van Helsing becomes the father of one of Dracula's victims. Donald Pleasence lends some light comic relief to the film in the role of Dr. Seward and Trevor Eve plays a likable, sympathetic Jonathon Harker.

In all, the 1979 version of Dracula is underrated, but something of a minor masterpiece in terms of Dracula adaptations. However, one thing stood out the most while working on this review series - each of the five films I selected were totally different from one another, so in terms of favourites, Dracula films are perhaps the most subjective. If you're partial to classical theatricality, faithful surrealism, atmospheric evil, blood-and-thunder bombast, or stylized melancholia, one of the five films I selected should appeal to you.

We've come to the end of this review series. If you liked these reviews or believed I left out a particularly good version (or take umbrage with my constant Francis Ford Coppola bashing), then feel free to leave a comment. Happy Halloween!
Posted by Nick Cardillo at 3:46 AM