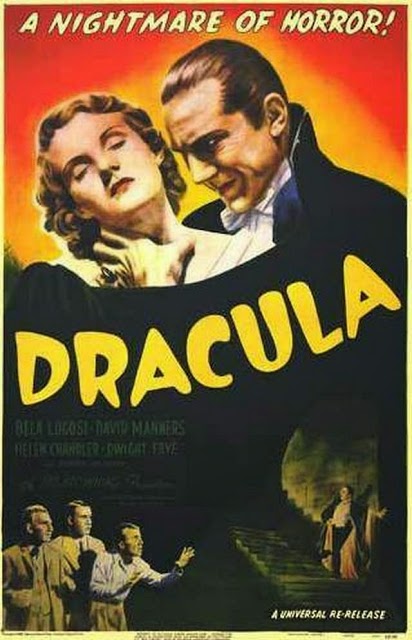 It is amazing to think that Sherlock Holmes has been portrayed on screen more than any other literary character. Not far behind vying for the record is the king of vampires, prince of the un-dead, Count Dracula. Since his appearance in Bram Stoker's 1897 novel, Dracula has immersed himself into our culture. As we celebrate this month looking forward to Halloween, I thought I'd count down my top five favourite Dracula films. So without further ado, I bid you welcome...

Of all the actors to play Dracula on film one has become more closely associated with the role than any other - Bela Lugosi. Lugosi was a fascinating, mysterious man in real life and before I delve any further into this famed 1931 film, I think it would be appropriate to take a minute and provide a history about how Lugosi became associated with the vampire in the first place.

Lugosi was a classically trained actor in his native Budapest. He scored roles as romantic leading men and sophisticated villains before he eventually drifted from the European stage. Lugosi arrived in America at just the right time as Dracula, a stage adaptation of Stoker's novel was about to hit Broadway. With his Hungarian roots and alluring appeal, Lugosi fit the bill perfectly to play Dracula on stage. The task was not an easy one for the actor as he has to learn all of his lines phonetically and throughout his life Lugosi never truly mastered the English language. With the play's success, a film version seemed imminent, Universal Studios procuring the rights to both the novel and stage play. Interestingly Lugosi wasn't considered for the role of Dracula - actors Paul Muni and Conrad Veidt making the short list. However, Lugosi at length secured the part. Cameras rolled and movie history was born.

I will say that Bela Lugosi is what truly makes 1931's Dracula. If the role were entrusted to any other actor I don't know if the film would be as fondly remembered as it is today. In fact, the movie is dated considerably with its distinct lack of musical score and stodgy, stagy set pieces some of which seem to go on for an interminable amount of time. But, Bela Lugosi never lets the audience forget him. Even after Dracula has left the majority of the film, his evil presence is felt throughout. It's this hypnotic power which no other actor has ever been able to capture the way that Lugosi managed.

The supporting cast of Dracula are enjoyable, but hardly eclipse the film's star. Edward Van Sloan presents a stalwart Professor Van Helsing, attempting to match Lugosi's theatrical delivery almost note-for-note. David Manners is on hand to play John Harker, the hero and romantic lead. Manners, much to his embarrassment later in life, would play important roles in what are arguably the three most well-known and revered horror film of the '30's - Dracula, The Mummy and The Black Cat. Helen Chandler, rather forgotten today, makes for a convincing heroine Mina, and her wide-eyed hypnotic stare is pretty chilling stuff even today.

Aside from Lugosi, the other most memorable part in the film is that of Dwight Frye as Renfield, the lunatic who is Dracula's human slave. Frye gives the role one-hundred-and-ten percent, completely immersing himself in the role. Frye's maniacal laughter lingers all in the memory after the film is over.

Despite the fact that Dracula was a commercial success in 1931, Universal's treatment of treatment of Bela Lugosi was far from exemplary. After turning down the role of Frankenstein's Monster in Frankenstein, Lugosi found himself virtually begging for movie roles. To add insult to injury, in 1936 when Universal got around to making a sequel to Dracula entitled Dracula's Daughter, the actor found his part of the vampire count written out of the script! The '40's didn't bring much aide to Lugosi's career as Universal cast their newest star Lon Chaney Jr. in Son of Dracula and John Carradine inherited the vampire's cape for House of Frankenstein and House of Dracula.

However, Lugosi got the last laugh - he was cast in 1948's Abbott and Costello meet Frankenstein, giving one of his finest performances and at once combining gravitas with tongue-in-cheek humour. It would be a fitting end to Lugosi's reign as king of cinema vampires in the '30's and '40's.

Despite the fact that it hasn't aged as well as other horror films of the period, 1931's Dracula brought the horror film into vogue and catapulted the genre onto cinema screens everywhere. Bela Lugosi, in one of his finest performances, made himself into one of the most meorable of all horror stars, and unknowingly created the image of the vampire for decades to come. Make sure to check in next Friday as I continue the countdown looking at the much-loved BBC version featuring Louis Jourdan.
Posted by Nick Cardillo at 3:43 AM