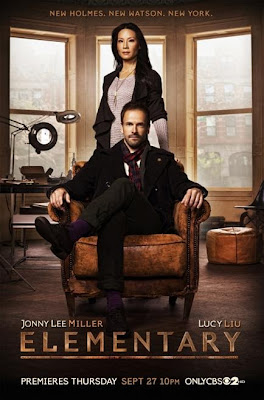 I know a while back I posted about how I was not fond of CBS' "Elementary." However, the first series was recently released on DVD and I had to give this show another try. I'm in something of a Sherlock Holmes dry-spell now, anxiously awaiting the third series of "Sherlock," so I thought that some Sherlock Holmes now is better than none.

Right out of the gate I'll say this: if "Elementary" was simply another run-of-the-mill crime drama, I'm sure it would be one of the best on television. But, I must judge the show more critically since its main character is the world's greatest detective. While the show is surely no Sherlockian masterpiece, it's not as bad as people may believe. Much of what is good is due to Johnny Lee Miller's performance as Sherlock Holmes. Miller's Holmes is far more rough-around-the-edges, a characterization of this type is not often committed to film. It's rather nice that despite radically changing setting, locale and characters, Holmes remains the intellectual master of Doyle's stories. Johnny Lee Miller manages to play Holmes as a cold, calculating genius throughout much of the series' run, and a lot of the humane side to his character is kept under wraps. I for one love that Sherlock Holmes is on the colder side, since it is close in spirit to Doyle's original.

For fans of Doyle, there are some nice touches referencing the original works. The fact that these references to the canon are few in number makes them very welcome. To emphasize Holmes' unusual, Bohemian nature, Sherlock Holmes is transformed into a tattoo-bearing, recovering drug addict. The references to Doyle's stories come in various forms: Holmes recounts the adventure of "The Crooked Man" at a sobriety meeting and later makes mention of "The Blue Carbuncle." A friend of Holmes' is named Musgrave and one episode in particular plays out as a modern-day update of "The Adventure of Charles Augustus Milverton."

What troubled fans most when the series was announced was that Watson was going to be played by a woman. Now, to be fair, the idea of gender-swapping Holmes' friend and associate isn't entirely a new one, but I can see where the hardened Doyle fan would be apprehensive. Lucy Lui was hardly my ideal version of Watson as the series opened, and in fact I thought she was pretty one-dimensional and bland. I'm glad to say that Liu's Watson did develop over time, and she became a more well-rounded individual, especially when she decides to stay on solving crimes with Holmes even though she has no need to be his sober companion any longer. The writers of the show managed to develop a close friendship between the two characters and it felt very real.

Where I think "Elementary" was at its weakest though was in some of the plotting. The show was at its best when it was simply presenting stand-alone, hour-long mysteries. I feel like whenever a story-arc reared its head, I began to loose some interest. The presentation of said story-arc was also pretty clumsy. Half way through the series, the word "Moriarty" is uttered for the last time, yet seemingly forgotten until the two-part finale. I do not want to spoil the finale for you, but let it be known that I personally think the writers got a little out of hand with trying to be clever and surprising. I will try to not let a few episodes spoil the whole bunch, but I still hope that the upcoming series has a stronger finale.

As I mentioned above, "Elementary" might be the best crime drama on television if it were not for the inclusion of Sherlock Holmes. The plots were very original and the acting was great in places. However, when a show like this is released so close on the heels of the super successful "Sherlock," comparisons are inevitably going to be drawn. Not to say that they shouldn't be. I have carefully avoided not comparing "Elementary" to "Sherlock" as I feel they should be considered two separate entities. Sure - if you want me to compare the two, "Sherlock" wins hands down. It's obviously the brainchild of very skilled writers who know their Sherlock Holmes canon like the back of their hand. Yet, I do not want to give the impression that "Elementary" is a bad show, because it's not. It's actually very well done and if you're a Sherlock Holmes fan like me, you'll find some very welcome surprises in store. I award "Elementary" 3.5 out of 5 stars.

Notes: To those anticipating the show's return, "Elementary" kicks off its second series on 27 September, 2013. From the promotional pictures and video I've seen, it seems like the show has some exciting episodes to come - notably a trip to London where it appears as if we'll be meeting Mycroft and Lestrade! So mark your calenders...oh, and one last thing - I neglected to mention the show's awesome theme and opening titles. Click here to check them out.
Posted by Nick Cardillo at 6:36 AM