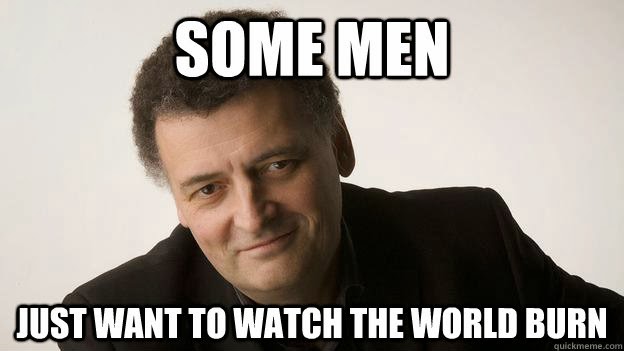 Is he a schemer: Yes. Does he enjoy manipulation: Yes. Is a showman: Yes. Is he one of the best writers of the last decade: that's debatable. Is Steven Moffat "out to watch the world burn?" Well, it depends on who you ask? Travelling in the circles that I do, I rub elbows with a lot of fans of Sherlock and Doctor Who, and more than a few of them are outspoken fans. (Aren't we all though?) Due to Steven Moffat pulling the puppet strings behind both series, devout fans will often discuss his role in these show's success, and more often that not, the opinion is divided. Today, I'd like to take a closer look at Steven Moffat - perhaps the world's most formidable evil genius.

I will preface this post with one disclaimer: I do like Moffat's work. Do I think that every word the man has ever entered into a Word processor has been pure gold: um...no. Like any writer, Steven Moffat has had his ups and downs, but in my opinion he's had more ups than downs, which has put me at odds with a number of other fans. So, in short, if what follows seems biased in anyway, it is probably because I am inclined to think that Moffat is a good writer, and surely one of the finest in television history.

A good story needs a good plot - that's pretty self-evident isn't it? The two go hand in hand and a clever, well-thought-out plot usually spawns a good story. I need to look no further than Doctor Who Series 5 to give evidence of Moffat's excellent plotting abilities. Series 5 was Moffat's first season as showrunner, having taken over after Russell T. Davies. Moffat managed to reinvent the show in a number of ways. He restored an air of seriousness to the proceedings. While there's nothing wrong with breezy entertaining viewing, Moffat's era added complexities unseen during the RTD years. Along with a dramatic tonal shift, Moffat tackled story-arcs head-on, and the arc in Series 5 is I think breath-taking in its complexities, the groundwork laid out in episode one and not resolved until the series finale. Watching Doctor Who became a game of "spot the clues" and piece them together, making the science fiction program an engaging experience. On a side note, the Series 5 finale, The Pandorica Opens/The Big Bang is, in this writer's opinion, one of the finest television stories ever penned.

I wouldn't be surprised if Moffat said to himself "Why stop here?" in the wake of Series 5. The next season adds new layers to the previous arc, introducing new plot threads and villains, and most importantly new revelations. The mid-season finale (yeah Doctor Who can be confusing to a novice), A Good Man Goes to War is I think one of the most surprising episodes ever, the cliffhanger leaving me in awe for a while afterward. I would have given anything to read a few reactions in the wake of that story's transmission. Yet, Series 6 is weighted down by a plot which is too complex. Speaking from personal experience, I needed a second viewing of the entire season and a flowchart to fully comprehend it. However, despite the extreme complexity, the series is still excellent television.

But what about Sherlock - this is a Sherlock Holmes-blog after all. Well, similarly Moffat's work on Sherlock has been fantastic, and his three contributions are among my favourite episodes of the show. A Scandal in Belgravia is one of the finest 90-minutes in television history, marked by some fine performances from Benedict Cumberbatch and Laura Pulver and extremely clever references to Conan Doyle's canon. A Scandal in Belgravia is my favourite episode of Sherlock. Moffat's other Sherlockian offerings are of equal quality: A Study in Pink showcases Moffat's predilection towards tight plots and His Last Vow, being the most serious episode so far, defined the characters extraordinarily well (and had that awe-inspiring surreal sequence in which Sherlock is shot).

But, there's something which truly gets my goat (do people still say that - oh well) when it comes to Sherlock. As the show has gained notoriety, interviews have been conducted with the behind-the-scenes personnel, and more often than not, Moffat is the one who answers the questions. This I think has given many the assumption that Moffat is the soul powerhouse behind Sherlock, seeming to neglect the contribution of Mark Gatiss. I could be completely wrong, but from what I have read on the Internet (so it must be true), Gatiss is the true showrunner when it comes to Sherlock. The fact that he is not only a writer, but also has a recurring role seems to show how he's a hands-on kind of person. So, why hasn't Gatiss gotten the same coverage? In my opinion, he's a quieter guy, less verbose than Moffat, as he manipulates his audience with the tape of a computer key. Despite the fact that Gatiss is a good actor, he doesn't have the same presence as Moffat, which I'm sure the press laps up. Now, that's not to say this could change. Inevitably, some day Steven Moffat will pass the torch of Doctor Who showrunner onto someone else, and my money is on Gatiss, which I wholeheartedly approve. The fact that Gatiss was responsible for the 50th anniversary celebratory special, An Adventure in Space and Time makes him seem like a shoe-in for the position. If this happens some day down the road, I'm sure that Gatiss will become more recognised as a writer and actor, instead of quietly lurking in the shadows. Ooh, that sounded a bit ominous...

So, it comes down to a definition of genius. Steven Moffat's stories have been excellent subjects of absolute perfection (The Empty Child, Blink, Time of Angels, A Scandal in Belgravia etc.), which in my mind makes him one of the finest screenwriters in my experience. As I covered quite heavily above, Moffat does know how to tell a good story, even if he doesn't achieve gold ever single time (*cough Let's Kill Hitler cough*). And, I suppose it comes down to one's definition of evil. Moffat surely knows how to twist an audience around his finger, and keep them on the edge of their seat. I could be wrong, but surely Moffat has some say in those melodramatic midnight BBC newsflashes? But, what people call evil is I think showmanship and flair. There couldn't be anything more dull than a showrunner who is severely disinterested in his topic. Moffat obviously has a love for Doctor Who and Sherlock Holmes and what better way to show that off than with a :touch of the dramatic?" But maybe I'm wrong. Maybe Steven Moffat is seated at home on a throne, a mischievous glee in his eyes, thinking to himself: "Yes - with secret weapons like Benedict Cumberbatch and Matt Smith, the world will soon be mine..."