The Horror of the Hound Part I 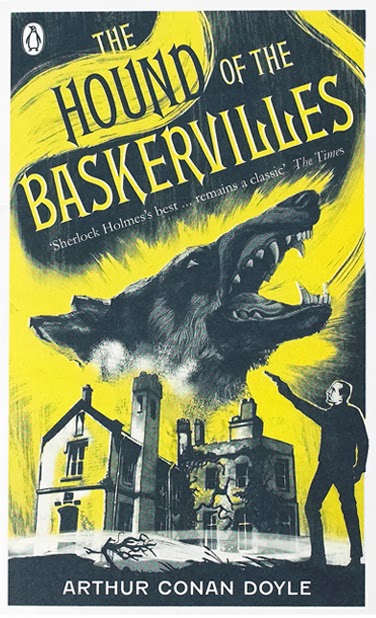 Part of the answer may lie in the history of the novel's publication. After he'd killed Sherlock Holmes off in The Final Problem, Arthur Conan Doyle turned to other ideas, one of which involved a ghostly hound on the Devonshire moor. Aided by his friend, Bertram Fletcher Robinson (whom Doyle collaborated with on a number of occasions), Doyle set out to create a story based on this spectral beast rumoured to lurk about Dartmoor. (Interesting tidbit time: Doyle purloined the name Baskerville from his cab driver.) As Doyle began writing, he found that a centralized character was needed to tie the strands of plot together. So, somewhat begrudgingly, Doyle resurrected the detective and set The Hound of the Baskervilles in the days before the great detective cornered Professor Moriarty atop the Reichenbach Falls.

So, historically-speaking, Arthur Conan Doyle didn't intend for Holmes to be part of the novel and that is perhaps one reason The Hound of the Baskervilles has more of a horror story vibe to it. When one looks at how the novel is structured, a drastic tonal change is noticed almost straightaway. The first five chapters lay the groundwork for the story, and set entirely in London, sees Sherlock Holmes at his most involved in the plot. After that, the detective recedes into the background as Watson takes over, and the book takes on a far more disconcerting feeling. It's not until the last three chapters does Holmes return to the action, and once more does the tone become one of mystery. If the history of the novel's publication is to be believed, Holmes may have been a fairly late addition to the proceedings. It's only when the great detective sticks his deerstalker into the plot does it become a standard whodunit again. 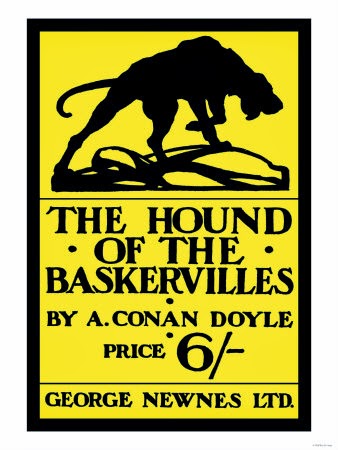 Holmes' lack of involvement in the story also helps establish the Gothic aura in a different sense. Holmes is without doubt a firm believer in the here and now (remember "no ghosts need apply"). If Sherlock Holmes had been involved in the entire plot, would the same uneasy feeling be present? I'm going to say probably not. If Doyle was setting out to write a ghost story, a detective who firmly opposes the belief in the occult would have shattered the aura. Let's liken this to another famous piece of Gothic fiction: Dracula. As soon as Professor Van Helsing enters the plot, he reinforces the supernatural trappings, and you never forget what kind of evil the characters are fighting. By contrast, Holmes would have reinforced the rational explanation to the end. By taking the great detective out of the equation, the reader is left with a nagging suspicion - what if the ghosts are real this time?

Then there's the feeling of isolation. Dartmoor is painted as being a pretty barren place, a ripe setting for a ghost story. The sense of isolation is one of The Hound of the Baskervilles' greatest indicators of Gothic fiction. Beginning in the early part of the nineteenth century, the Gothic movement of writers countered the work of the transcendentalists, painting pictures of basically evil people and the dangers which come with isolation. Most notable amongst these works are Poe's The Masque of the Red Death and The Yellow Wallpaper by Charlotte Perkins Gillman. Both of these titles are strongly influenced by isolation, and the latter story actually depicts a woman's downward spiral into madness due to her severed ties from the outside world.

And what would any discussion of the horrific side of this novel be without a glimpse at the monster of the piece. And what an excellent monster it is - it's initial appearance delivering chills up the spine of any reader. Put yourself in the shoes of someone reading the initial publication of The Hound of the Baskervilles is serialized form. The tension is building and the latest installment ends with these words:

"A hound it was, an enormous coal-black hound, but not such a hound as mortal eyes have ever seen. Fire burst from its open mouth, its eyes glowed with a smouldering glare, its muzzle and hackles and dewlap were outlined in flickering flame. Never in the delirious dream of a disordered brain could anything more savage, more appalling, more hellish be conceived than that dark form and savage face which broke upon us out of the wall of fog." 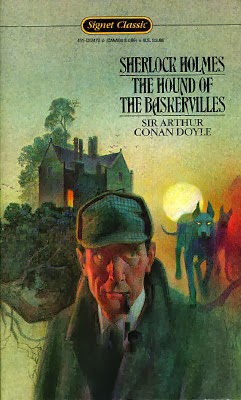 If that doesn't raise goosebumps, I don't know what could. The hound, which has been kept off to the side until now, makes a fantastic appearance, charging after Sir Henry Baskerville and nearly killing him. Despite the reappearance of Sherlock Holmes, and a rational explanation being delivered, this tableau is still a disconcerting one. The hound, though only seen in three paragraphs of the story, still stands a remarkable creature in Gothic literature - right up there with Count Dracula and Frankenstein's Creation.

So, we reach something of an impasse. The Hound of the Baskervilles is, of all the Sherlock Holmes stories, the creepiest tale. It is absolutely dripping with atmosphere and Gothic thematic elements. Yet, unlike most Gothic horror stories, everything is rationally explained come the finale. This rather puts things at odds with the rest of the sub-genre. So, is The Hound of the Baskervilles a piece of Gothic fiction? Even if the novel is not the same type of horror novel as Dracula, Frankenstein and others, it cannot be denied that this atmosphere influenced dozens of the film adaptations which would come in the novel's wake. Coming Soon - The most beloved adaptations of The Hound of the Baskervilles are the ones which capture the Gothic elements. In Part II entitled, "Sherlock Holmes Goes to the Movies," I examine the impact a little bit of horror has had on these films.
Posted by Nick Cardillo at 3:43 AM