Review - "The Cotswolds Werewolf and Other Stories" 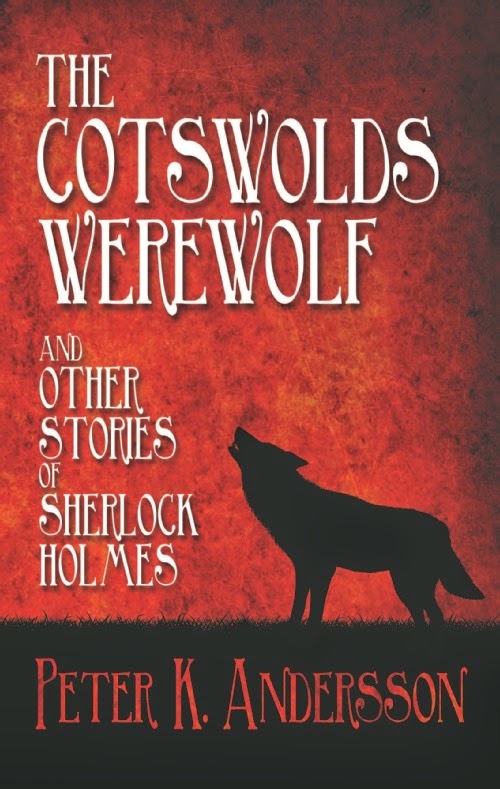 The Cotswolds Werewolf and Other Stories is yet another in a long line of pastiches which finds the world's greatest detective investigating what seem to be supernatural goings-on. While the concept may not be the most original, I freely admit that I enjoy it. Reading any pastiche which finds Sherlock Holmes in an atmospheric setting, investigating an unusual crime makes for a fun experience. The question is, does this collection of short stories live up to the high standard of its predecessors?

The main attraction of this collection is the eponymous story, "The Adventure of the Cotswolds Werewolf." It finds Holmes suffering from a bout of ennui, and in hopes of curing his friend's boredom, Dr. Watson suggests a trip to the countryside. Once they arrive in the small hamlet of Cotswolds, the two become aware of a mysterious creature which has been killing farmer's sheep. The locals blame a werewolf for the killings, and their hysteria is heightened when a sheep-herder is found murdered.

"The Cotswolds Werewolf" excellently portrays the atmosphere which makes horror-tinged pastiches work so well. The isolated village is the perfect setting, and as the story moves forward, we become aware of the town's dark history including witch trials and curses. In a neat touch, the characters of the village are nicely developed, most notably the vicar and his wife who become instrumental in solving the mystery. It adds to the air of the close-knit community which the story strives to portray. In terms of plot, "The Cotswolds Werewolf" moves along a nice pace, though Sherlock Holmes doesn't become involved in the investigation until the story's third chapter. Nevertheless, these portions of the detective doing what he does best do not seem rushed.

The collection's other short stories are also nice, capturing the spirit of Doyle's originals. First in "The Adventure of the Velvet Lampshade" a woman visits Sherlock Holmes after her maid goes missing. I would say that aside from the title story, this is the strongest story of the set with some fine detective work on Holmes' part and a very nice twist ending which I did not see coming.

Next is "The Adventure of the Missing Mud-Lark" which sees Holmes involved in another missing-person case when a young boy disappears in one of London's seediest districts. This story too featured some nice detective work on Holmes' part, though the twist ending implemented is certainly not as strong as the one in the previous story. This story also features a flashback sequence, which in my mind, goes on a bit too long and makes the middle section of this otherwise short story feel overly long.

The final two stories are the shortest of the collection. The first, "The Adventure of the Forking Paths" finds Holmes and Watson contacted by a botanist after an extremely rare Japanese orchid goes missing. It is a nice little story, but truly nothing to write home about. Lastly, "The Adventure of the One-Armed Pugilist" sees a man come to Holmes after he is brutally attacked in the street. This adventure, though less than ten pages, turned out to use yet another ingenious twist ending, and some fine deductive work from Holmes.

In all, I was very pleased by The Cotswolds Werewolf and Other Stories. Featuring a fine eponymous story and four well-written other stories, the short story collection was a fine selection of Sherlockian offerings and I hope to read more from author Peter K. Anderson in the future. I therefore award this collection 4 out of 5 stars.

The Cotswolds Werewolf and other Stories of Sherlock Holmes is available from all good bookstores including   Amazon USA, Amazon UK, Waterstones UK, and for free shipping worldwide Book Depository . In ebook format it is in Amazon Kindle,  Kobo, Nook and Apple iBooks (iPad/iPhone).
Posted by Nick Cardillo at 6:55 AM