William Gillette and the Great Detective 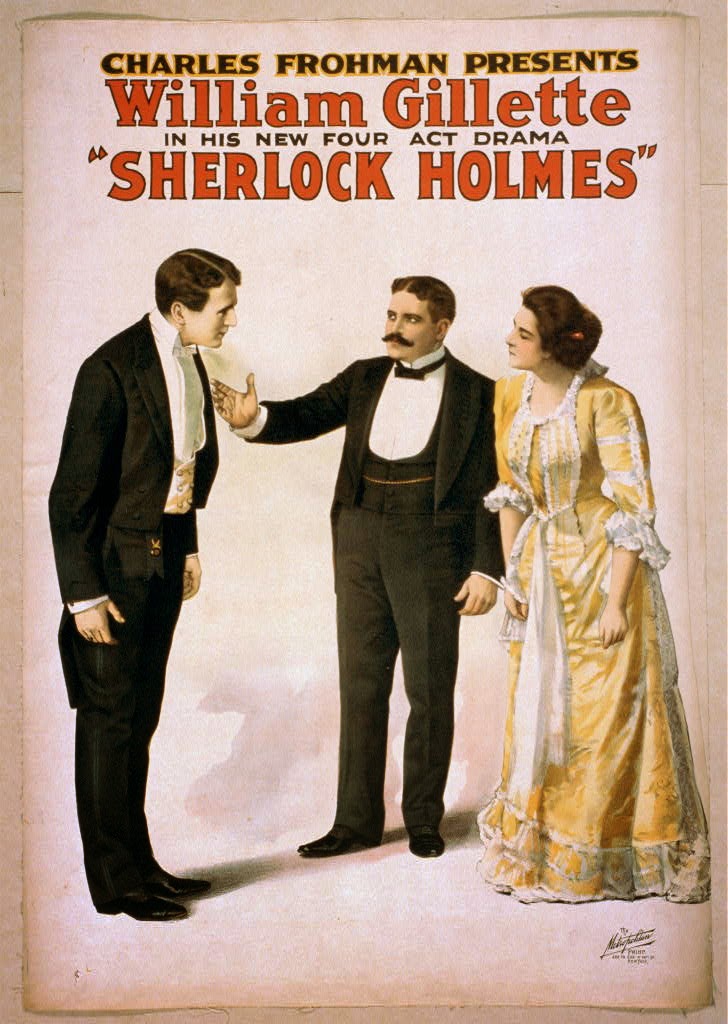 Sherlock Holmes has been ripe for the stage. There's something exciting about seeing the detective's astounding deductions live which simply cannot be rivaled on the page on the screen. Above all others, there is one man who is responsible for bringing the detective to the stage - American actor William Gillette. Perhaps without even knowing it, Gillette was redefining the detective more than he ever imagined.

So, how did Gillette become associated with the detective? Gillette was an American actor born in Connecticut in 1853. Throughout most of his life he worked as an actor, producer and director making quite a name for himself in theatrical circles. All the while, Arthur Conan Doyle, having already killed Sherlock Holmes off in The Final Problem discovered that he could make a steady income off of his great creation, and needing money to finance the building of his new home Undershaw, decided to bring his creation to the stage. Doyle's original conception was a five-act play which featured a young Holmes and Watson. Doyle offered his final product to two of English theatre's biggest names - Sir Henry Irving and to Sir Herbert Beerbohm Tree. Tree was interested but asked for drastic rewrites to suit his theatrical style - and so he could both Holmes and Moriarty! Through a literary agent, the idea for a Sherlock Holmes play eventually ended up in Gillette's hands.

At once, Gillette began writing his own play, with Doyle's endorsement, and took some creative license. In a now infamous telegram, Gillette asked Doyle: "May I marry Holmes?" Doyle responded: "You may marry him, or murder or do what you like with him." What eventually transpired was Sherlock Holmes: A Drama in Four Acts which was based on the short stories A Scandal in Bohemia and The Final Problem. The plot, almost entirely original, finds Holmes becoming involved with Alice Faulkner who has come into the possession of incriminating documents in the effort to avenge her murdered sister. These documents are of course too much to resist for Professor Moriarty who sets out to stop the detective in his tracks. The play would eventually bring Gillette international fame. 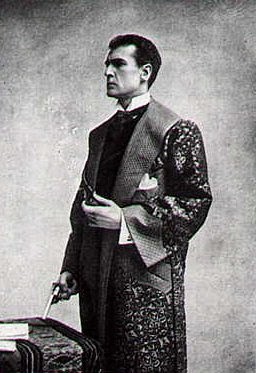 What is perhaps the most important thing about Gillette's Sherlock Holmes play is how much it added to the Sherlockian mythos. This was truly the first time that any interpretation of Doyle's stories was done, and so for many, Gillette was the one, the only Sherlock Holmes. He was Basil Rathbone, Jeremy Brett, Peter Cushing and Benedict Cumberbatch all rolled into one! Gillette introduced the calabash pipe and made the deerstalker and magnifying glass parts of the detective's persona. A true testament to Gillette's impact on the detective can be seen in the works of artist Fredric Derr Steele whose illustrations of Doyle's stories for Collier's Magazine was obviously inspired for Gillette.

So, there's no denying how revolutionary Gillette was in the history of Sherlock Holmes, but what of his play? I have a feeling I might get some flack from other Sherlockians for this, but I'm not afraid of a little controversy - I simply don't like the play. Now, I have never seen the play performed live, but I have read it. Maybe this has something to do with it (I have seen Paul Giovanni's The Crucifer of Blood performed live which might account for why it is my favourite Sherlock Holmes play). My main complaint about the play is its plot which is just too dull for me. The breakdown of scenes is stodgy, and though this was the norm at the time, Gillette's play has certainly not aged well. Though the characterisations of Holmes, Watson and Moriarty are presented accurately, some of them are seen far too little. In fact, Watson is almost side-lined completely throughout the show's run.

And though Doyle gave Gillette permission to marry Holmes at the end of the show, it really does detract from the detective's personality, and I argue that the romance angle really comes out of nowhere. Therefore it feel pretty tacked on as though Gillette was determined to have a nice, happy ending all tied up in a bow. It is worth noting that Gillette's play has been revived in the past, but hardly the same number of times that other Sherlockian dramas have been. Most notably are runs which starred actors such as John Wood, Leonard Nimoy and Frank Langella. For those interested, Langella's performance can be found in full on YouTube.

Why hasn't Sherlock Holmes: A Drama in Four Acts circulated theatres as often? I suggest the changing times as the main culprit for the show's somewhat obscurity. The times have changed a great deal since Gillette premiered in the show, and perhaps some of my criticisms of the play are due to this fact. The laid-back, dare I say stodgy, approach was conventional in Gillette's time and he was simply writing like any other playwright would have written at his time. All the same, Gillette's play isn't ranked amongst my favourite Sherlockian efforts, but I do not discount the dramatic impact which the play had on the history of the character. Even after Gillette rose to international acclaim in the role, the play continued to have a profound impact. Gillette starred in a movie version of his play (now lost to the pages of history). John Barrymore's turn as the detective in 1922 also took inspiration from Gillette's play. And 1932's Sherlock Holmes starring Clive Brook, though dramatically changing the plot, was more-or-less an adaptation of Gillette's work.

As I mentioned above, there is no denying the profound impact which William Gillette's Sherlock Holmes play has had on the history of the character. Gillette's influence on the character is seen to this day. Nonetheless, I am less-than enthused by the play. That doesn't mean that if I had the opportunity to see the show performed live I'd turn it down as I consume all things Sherlock Holmes, and after all this is all just my opinion.

One last word: Gillette was devoted to the works of Arthur Conan Doyle and for the rest of his life he would never be far from the great detective. In 1929, Gillette embarked on the show's farewell tour, and though only scheduled for two seasons, he continued playing the part until 1932 wrapping up at the age of 78. That's what I call devotion to Holmes, so bravo Mr. Gillette!
Posted by Nick Cardillo at 5:22 AM