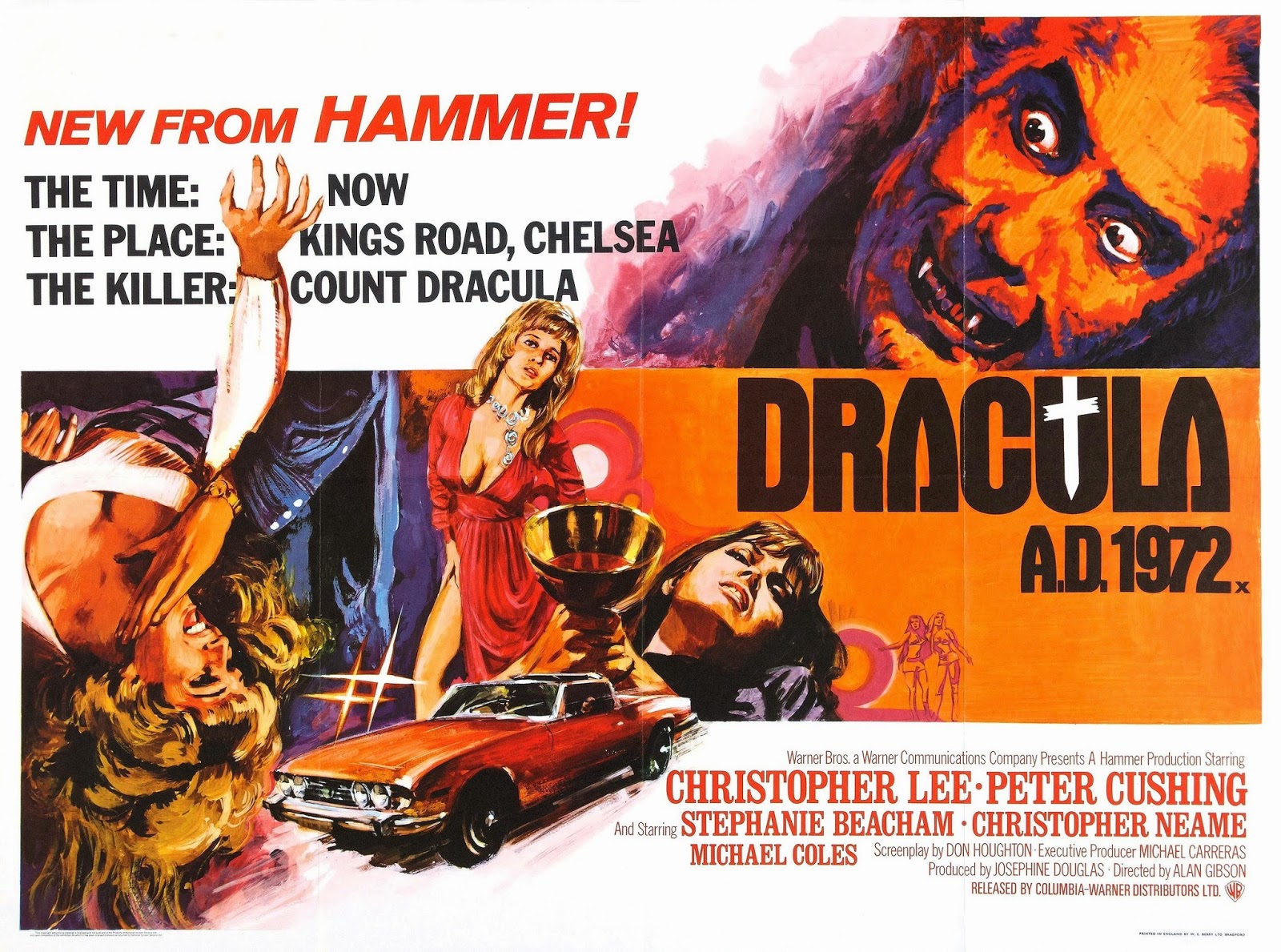 By the early 1970's, Hammer had run its course in terms of projects. The '70's saw Hammer films such as Dr. Jekyll and Sister Hyde, Lust for a Vampire and Demons of the Mind. Gothic horror films were becoming passe in the era and it seemed that there was only one thing which the studio could do to keep their films fresh - move 'em to the modern day. Despite the fact that Gothic horrors were the staple of Hammer Films, there was high hopes for a script written by Don Houghton called Dracula - Today. Houghton's script, eventually directed by Alan Gibson, would become entitled Dracula A.D. 1972 and reunited Christopher Lee and Peter Cushing as Dracula and Van Helsing respectively. The film is the subject of today's review as we continue Peter Cushing Month.

1872 - Professor Van Helsing (Cushing) fights to the death with Count Dracula (Lee). Killing Dracula, the Professor expires before one of Dracula's followers scoops up the vampire's ashes and buries them outside a church. One-hundred years later, Van Helsing's grandson, Lorrimer (also played by Cushing) has become a well-respected scientist studying the occult,but has become distanced from his own grand-daughter, Jessica (Stephanie Beachman). One evening, Jessica and a group of her friends, including the creepy Johnny Alucard (Christopher Neame) decide to hold a black mass in a deserted church, and in doing so resurrect Dracula. When a series of murders begin to occur in Chelsea, Scotland Yard Inspector Murray (Michael Coles) soon allies himself with Van Helsing with the intent of closing in on the Prince of Darkness, Count Dracula himself.

Dracula A.D. 1972 is a hard film to defend at times. It's cast primarily comprised of young people living in the Swingin' '60's dates the movie incredibly, as does the simply unreal dialogue. During the black mass, Johnny Alucard tells the others "dig the music kids" as he begins to play the dirge-like, black mass music. All of this is complimented (if one can truly use the word) by a truly out-of-place jazzy score by Mike Vickers. All of this dates the movie terribly making it feel like an incredibly dark episode of The Brady Bunch. Yet, the film is so entertaining. It is almost impossible not to find something to enjoy in the movie if one knows not to think too deeply into it.

As noted above, Dracula A.D. 1972 was made in response to changing audience opinion and tastes. Perhaps the most obvious influence was the release of Count Yorga, Vampire in 1971. The film, starring Robert Quarry, found age-old vampire Count Yorga taking up roots in then-modern California. It seemed apparent to Hammer that if the Yorga film (which spawned a sequel) could be a tremendous success than the same could be done with Bram Stoker's original. On paper, the idea that seemed like a good one, and one has to believe that in 1972, Dracula A.D. 1972 was a bit more palatable when (unfortunately) phrases like "far out" and "groovy" were commonplace. 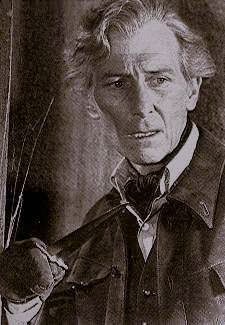 The cast of Dracula A.D. 1972 helps to elevate the at-times campy script. Of course to this viewer, Peter Cushing is the centre of attention as Lorrimer Van Helsing. Cushing's third go-around as vampire hunter is one of his most interesting due to the fact that this new modern day creation is not used to vampire hunting. Despite the fact that Van Helsing is descended from a long line of monster fighters, Cushing's character here is fighting the forces of darkness for the first time, especially toward the finale when Jessica, his grand-daughter, has been kidnapped by Dracula. Cushing introduces a number of interesting character touches, especially in one fine sequence wherein Van Helsing must steal a flask-full of holy water from a church. Cushing's nervous expression is actually quite humorous.

Interestingly, Christopher Lee is top-billed this time around as Dracula (the last time he and Cushing played Dracula and Van Helsing in 1958's Dracula, Cushing walked away with top billing as the Professor), despite the fact that Dracula is side-lined for much of the film. As ever, Lee is the incredibly domineering as Dracula. One would never know that by this point in time Lee had become very disillusioned with Hammer continually urging him to don the cape of the vampire time and time again. Lee also looks impressive in this outing - much better than his oddly pale-faced appearance in the previous, far inferior Dracula film, Scars of Dracula (1970).

The remainder of the supporting cast give a number of fine performances. Stephanie Beachman's Jessica undergoes an interesting change in character as she becomes closer to her grandfather as the film progresses. Christopher Neame as Dracula's follower, rather preposterously named Johnny Alucard (that's Dracula spelled backwards), almost steals the show from Cushing and Lee. Neame gives a truly unnerving performance and his climatic struggle with Cushing's Van Helsing is well choreographed and exciting. A word must also be said for Caroline Munro as Jessica's ill-fated friend Laura. Munro is truly memorable, especially when she decides to take part in the black mass, and gets covered in Alucard's sacrificial blood. Munro was one of Hammer's most famous latter-day faces also turning up in their film Captain Kronos - Vampire Hunter (1974) and in 1977 she would go on to appear alongside Roger Moore in The Spy who Loved Me.

Just as the aforementioned Count Yorga, Vampire spawned a sequel, so did Dracula A.D. 1972 and I'd like to take a moment to take a look at that follow-up as it once more teamed up Cushing and Lee. Almost given the title Dracula is Dead...and Well and Living in London, Hammer's final Dracula film came to be called The Satanic Rites of Dracula and was released the following year. Working as a direct sequel, the film finds Van Helsing called in by Inspector Murray once more to investigate some strange goings-on involving four prominent government men who have taken to practicing Devil worship. Van Helsing soon learns that one of these men has perfected a new strain of plague, and when the Professor learns that Dracula may still be alive, he springs into action once more in order to save the day...and all of humanity as we know it. Just as campy as its predecessor, The Satanic Rites of Dracula does seem to take itself more seriously, mixing a darker story-line with a little dash of espionage. There's no real reason why I don't like the film as much, but compared to Dracula A.D. 1972, the film is lacking in a distinct sense of fun. However, if you're a big fan of Cushing and Lee and want to see the final film in which they played their most famous roles together, The Satanic Rites of Dracula is an entertaining ride.

In all, Dracula A.D. 1972 is a fun, incredibly campy horror show. If the viewer is willing to check their expectations at the door than it is possible to find this film incredibly entertaining, reveling in every "groovy" moment. I am luckily not the only person out there who seems to enjoy this film. Writer Sinclair McKay wrote in his entertaining analysis of Hammer horror's, A Thing of Unspeakable Horror: "I just have to say at this point - hand held high - that [Dracula] A.D. 1972 is one of my favourite Hammers. This preference can't be explained, it just is, that's all. Against all odds, it's an insanely cheering (and hypnotically watchable) production." I couldn't agree more and I give Dracula A.D. 1972 4 out of 5 stars.
Posted by Nick Cardillo at 3:46 AM