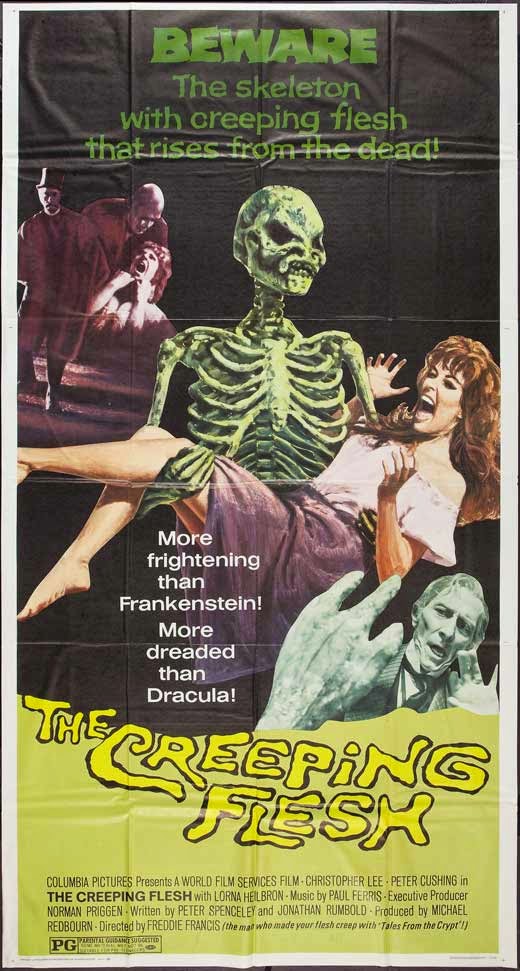 Seldom has a horror film been produced which could actually be likened to a Shakespearean tragedy. A notable exception is 1973's The Creeping Flesh, which is described by author Mark A. Miller in his book Christopher Lee and Peter Cushing and Horror Cinema as being "the best of the last [Cushing and Lee contributions]." Highly atmospheric, morose, and brooding, The Creeping Flesh boasts one of Cushing's finest performances which we shall examine as we conclude Peter Cushing Month.

Peter Cushing stars as Professor Emmanuel Hildern who has returned from New Guinea with a skeleton of what he believes to the be the embodiment of evil. Hildern is a broken man after his wife lost her mind and confined to an asylum overseen by his cold, emotionless brother Dr. James Hildern (Christopher Lee). It was while in James' care that Emmanuel's wife died. However, fearing that insanity may be a hereditary trait, the Professor has lied about his wife's mental illness and death to his only child, his daughter Penelope (Lorna Heilborn). Quite by accident, Emmanuel discovers that when exposed to water, the skeleton miraculously re-glows flesh, and drawing some of the blood from the specimen, the Professor inoculates his daughter, hoping to vaccinate her against insanity. Soon, his plan backfires and before long both Emmanuel and his brother James will look pure evil in the face...

In the 1970's, Peter Cushing and Christopher Lee were lucky to have a spat of well-written movies come their way. The two men starred in three successive films: Horror Express, The Creeping Flesh,and Nothing But the Night (1973). All three films had very original premises, which was not the norm for quickly-produced horror films at the time. While the previously-reviewed Horror Express' script allowed for a fun, scary romp, The Creeping Flesh is different. It's a very downbeat film, laboring on topics like insanity and the root of evil. These type of philosophical discourses were few and far between in films of this sort, and this manages to make The Creeping Flesh feel rather sophisticated in a way. At the end of the day, it's still a cheaply produced horror film, but the ideas which it touches on are far deeper and more far reaching.

The concepts which are introduced in the film are expertly handled by Cushing and Lee. While Cushing is today best remembered for his excellent turns as Baron Frankenstein or Professor Van Helsing, his role as Professor Emmanuel Hildern may be one of his best on screen. Hildern begins as the typical dotty scientist who abandons the needs of his family (in this case his daughter Penelope) to make a breakthrough in scientific thought. Hildern becomes a more multifaceted person when we learn that he does care for his family and is trying to protect her in his own misguided manner. Of course, like most dotty scientists in horror films, his plans go horribly awry. Cushing lends a great deal of realism to his performance as Hildern, and he becomes one of Cushing's most pitiable characters. One of the film's most memorable (and heart-wrenching scenes) finds Hildern's daughter, Penelope, discovering the secret about her mother, donning her mother's old dress and beginning to play the piano. Hildern, lured to the room in which he has stowed his wife's possessions first believes that his wife has returned to life, only to have his own ludicrous dream shattered when he discovers that it was Penelope all along. Cushing, sobbing uncontrollably, is simply stunning.

While Emmanuel Hildern may be one of Cushing's most emotional roles, the part of James Hildern is surely one of Christopher Lee's coldest. Whether he is subjecting a patient to electric shock therapy, or shooting an escaping prisoner in the back, seldom has a character as heartless as James Hildern been put on the screen. What is fascinating about James is that he is not truly a villain, he's simply an unlikable guy who, like his brother Emmanuel, is driven by his desire to revolutionize scientific thought, which leads him to stealing the skeleton from Emmanuel's lab come the tense finale. Lee is simply in top form here.

However, the true standout (aside from the already lauded Cushing) is Lorna Heilborn as Penelope. After she's vaccinated by her father for madness, she begins to spiral downward, losing her mind completely. It's an emotional punch in the gut for the viewer knowing how much Emmanuel tried to protect his daughter, made all the more poignant by Heilborn's excellent performance. All of the stars are wonderfully directed by Freddie Francis, a veteran of many Hammer films and Amicus horror anthologies which meant that he'd worked alongside Cushing and Lee many a time. Though at heart a cinematographer, Francis managed to combine his love for camera work with directing which manages to give The Creeping Flesh a truly unnerving atmosphere, and come the finale, a number of wonderful camera shots.

As noted above, The Creeping Flesh is greatly benefited by a truly engaging, original screenplay which was written by Peter Spenceley and Jonathon Rumbold. Many reviewers have likened the story to a Shakespearean tragedy, so it's no great spoiler to say that the characters aren't very well-off come the ending. But, the roots of the tragic story-line go deeper. It is the misguided efforts of the main characters which eventually leads to their downfalls which adds greatly to the sense of irony which permeates the entire movie. There is also a brilliantly choreographed twist ending which is hinted at in the film's very beginning, and with the introduction of this twist, the film's entire meaning is flipped dramatically on its head. There is much debate over what actually happens in the movie, the ending rendering much of it ambiguous, which is just one more indication that The Creeping Flesh was taking risks where other horror films of the period were not.

It would not be misguided to call The Creeping Flesh one of the best horror films of the 1970's. An original screenplay creates three vivid characters, all of whom are brought to life brilliantly on screen and who extenuate the emotional vein which runs through the picture. What's more it's filmed by a director who had a keen eye for fascinating visuals and capped off with nicely realized twist ending. All of these ingredients make The Creeping Flesh a horror film not to be missed by both the Peter Cushing enthusiast or a vintage horror film fan. It receives a well-deserved 4.5 out of 5 from me.
Posted by Nick Cardillo at 5:13 AM